Join Martin Edwards for a Facebook Live event on Thursday

Join the author for a conversation on Golden Age detection and his latest novel, Mortmain Hall.

Greetings #crimelovers. Tomorrow at 6 pm UK time I shall strive to overcome my technofear and host my first #FacebookLive event on #GoldenAgedetection and #MortmainHall #askMartin @HoZ_Books @BL_Publishing @midaspr Do wish me luck! 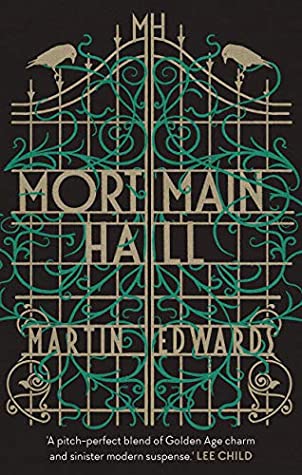 ENGLAND, 1930. Grieving widows are a familiar sight on London's Necropolis Railway. So when an elegant young woman in a black veil boards the funeral train, nobody guesses her true purpose.

But Rachel Savernake is not one of the mourners. She hopes to save a life – the life of a man who is supposed to be cold in the grave. But then a suspicious death on the railway track spurs her on to investigate a sequence of baffling mysteries: a death in a blazing car; a killing in a seaside bungalow; a tragic drowning in a frozen lake. Rachel believes that the cases are connected – but what possible link can there be?

Rich, ruthless and obsessed with her own dark notions of justice, she will not rest until she has discovered the truth. To end the answers to her questions she joins a house party on the eerie and remote North Yorkshire coast at Mortmain Hall, an estate. Her inquiries are helped – and sometimes hindered – by the impetuous young journalist Jacob Flint and an eccentric female criminologist with a dangerous fascination with perfect crimes...

Mortmain Hall is at once a gripping thriller and a classic whodunit puzzle: a Golden Age Gothic mystery, the nest novel yet from a modern master of crime writing.

Martin Edwards has won the Edgar, Agatha, H.R.F. Keating, Macavity, Poirot and Dagger awards as well as being shortlisted for the Theakston's prize and the CWA Gold Dagger. He is President of the Detection Club, Chair of the CWA and consultant to the British Library's bestselling crime classics series.

Mila de Villiers interviews Liz Moore, whose powerful literary thriller has become the most anticipated book of the year
Books
1 year ago