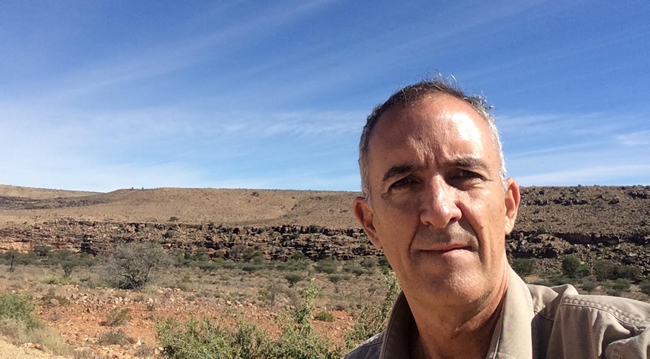 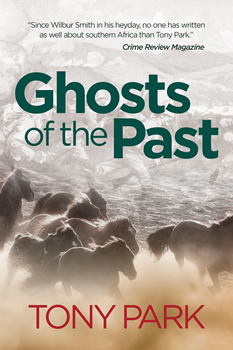 Tony Park is the acclaimed author of 17 thrillers set in southern Africa, as well as six biographical books.

An Australian, he has worked as a reporter, a press secretary, a PR consultant, and a freelance writer. He also served 34 years in the Australian army reserve, including a tour of duty in Afghanistan. Park and his wife now split their time between two homes - one in Sydney and one in South Africa near the Kruger Park.

The Times of London has described Park as the “spiritual heir” to Wilbur Smith, while Publisher’s Weekly said he “excels at capturing the wilds of (Africa), as well as its political and commercial pressures".

Ghosts of the Past follows the story of an Australian, Nick Eatwell, who discovers that his great uncle, Cyril Blake, went to South Africa, fought in the Boer War there, and then stayed on in South West Africa (modern-day Namibia). Nick falls for a South African journalist who is investigating the Namibian story and decides to visit South Africa when she returns there. In parallel, we follow Blake’s exploits in early 20th century Africa and start to understand why there’s suddenly so much interest in what he did and who he did it with. The two perspectives make a broad canvas, with a strong sense of time and of place. It’s both a thriller and an adventure story.

I asked Park about writing a historical thriller that is also a modern-day one. His response, and the answers to many more questions, are recorded below in this The Big Thrill interview.

There’s an enormous amount of historical research behind Ghosts of the Past. Not only is half of it set around the start of the 20th century, but it’s based on the real life of Australian soldier and adventurer Edward Presgrave. How did you set about obtaining all the background information you needed to make the novel’s sense of time and place convincing?

I was writing one my earlier novels, An Empty Coast, and reading a history of Namibia, where the book was set, when I chanced upon a one-line mention of Edward Presgrave, an Australian who fought alongside the Nama people in their uprising against their German colonial masters in South West Africa (modern Namibia) in the early 1900s. I thought, “Wow, that’s a great premise for a novel” and then forgot about it for a few years.

When I was getting ready to write my last novel, I remembered that mention and Googled Edward Presgrave. I found out that in the intervening period an Australian academic, Professor Peter Curson, had researched and written a non-fiction book about Presgrave and that became my starting point for my research (and the bulk of it). I met Peter and he suggested I write a novel about Presgrave - exactly what I hoped he would say!

In some ways, Namibia itself is a character in the book with its desert expansiveness, old German architecture, and icy coastline. It makes a wonderful backdrop. Have you spent a lot of time exploring the area?

I love Namibia and have visited several times. You’re right, it’s a fantastic backdrop for a novel, a land of physical and cultural contrasts, with a rich history. Ghosts of the Past takes place in the south of the country, which is wild and empty and less visited by tourists. Researching and writing the book - I wrote much of it “on location” - gave me a perfect opportunity to explore the empty reaches of the Karas Mountains, where a guerilla war was fought against the Germans, and the historic old port town of Luderitz on the Atlantic Coast. I hope the book brings back some memories for anyone who’s visited Namibia, and encourages other people to travel there - it’s a beautiful country.

The book is really two intertwined thrillers in one. One story follows the exploits of Cyril Blake in the Boer war and subsequently in what was then German South West Africa, and the other is set in the present day where Nick Eatwell follows the trail of Blake, his great uncle, from Australia to Namibia. Both Blake and Eatwell are sucked into a hunt for Kruger’s lost gold and that’s how the two stories come together. Why did you decide to develop the book that way instead of either as a historical novel with Blake as protagonist, or as a modern-day novel with Eatwell as protagonist?

The truth? I cheated. When my first novel, Far Horizon, was accepted for publication back in 2004, I had already started work on a second manuscript, set in the Boer War in South Africa at the beginning of the twentieth century. I was about 10,000 words into it and enjoying the story. I told my publisher I had a second work in progress and she told me to stop, as they were about to publish another novel set during the Boer War.

That book was “lost” on an old computer for some 15 years. When I started thinking of writing Ghosts of the Past I wondered if I could salvage some of that long-lost novel. I had really enjoyed that story, of an Australian soldier who stumbles across a plot to find a missing horde of gold, and I decided to dust it off, fix it up, and use it as the starting point for Ghosts of the Past I had some ready-made characters and so I just went with it!

The idea for a modern story, in parallel, was more comfortable for me, as most of my other 17 novels are contemporary. I could have written the whole book set in the modern time, but the other thing I like to do is to challenge myself as a writer, so I decided to write two stories at the same time.

It did present some challenges, mainly in trying to keep the pace up and not dwell too long in one time period or the other, but it was a fun ride.

Michael Sears and Stanley Trollip are the dynamic duo behind the pen name Michael Stanley and the award-winning Detective Kubu mystery series.
Books
2 years ago