Image: Supplied The winners of the 2020 Media24 Books Literary Prizes were announced in a virtual awards ceremony on June 18.

The Media24 Books Literary Prizes are awarded annually for books published by the Media24 Books division and Jonathan Ball Publishers, also part of Media24, during the preceding year. Prizes to a combined value of more than R200,000 are awarded in six categories.

Steinberg won the Recht Malan prize for nonfiction for One Day in Bethlehem, published by Jonathan Ball Publishers, about a man who spent 19 years in jail for a murder he didn’t commit.

According to the judges, “Steinberg explores difficult questions about the unreliability of memory, the nature of truth and the way in which South Africa’s racist past continues to haunt the present… By excavating – in meticulous detail – the story of one man’s entanglement with, first, the apartheid and, then, the ‘post-apartheid’ criminal justice system, the book also shines a light on the country’s troubled criminal justice system and forces the reader to ask whether it is possible to speak of ‘justice’ in what has become known as post-apartheid South Africa… An unforgettable book that reminds the reader that ‘the past is never dead. It's not even past.’”

Also on the nonfiction shortlist were Adam Habib’s Rebels and Rage and Lawfare by Michelle le Roux and Dennis Davis. 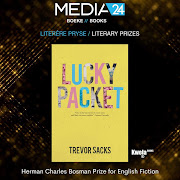 The Herman Charles Bosman prize for English fiction went to Trevor Sachs for Lucky Packet, a novel about a young Jewish boy growing up in a predominantly Afrikaans community in the Northern Transvaal in the 1980s. It was published by Kwela Books.

In their commendation, the judges said, “The book is beautifully written, and though a story about a child, it is careful not to cheat us with sentimentality. Instead it is honest, and handles its heavier moments with a light touch. Lucky Packet is a wonderfully accomplished novel.”

Also on the English fiction shortlist were Okay, Okay, Okay by Finuala Downling and Yellowbone by Ekow Duker. 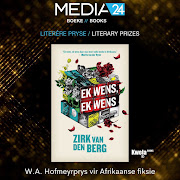 Loftus Marais received the Elisabeth Eybers prize for Afrikaans and English poetry for Jan, Piet, Koos and Jakob, published by Kwela Books. The other shortlisted titles were Chinatown: Gedigte by Ronelda Kamfer, Kryt by Hennie Nortjé and Sikhahlel’ u-OR: A Praise Poem for Oliver Tambo by Mongane Serote.

Johannesburg writer Edyth Bulbring won her second MER prize for youth novels for The Choice Between Us, published by Tafelberg. According to the judges, this story of two Johannesburg girls and two acts of betrayal, set more than fifty years apart, deserves to be read by adults and young people alike. “It is a beautiful book with a story and characters that fascinate from the very first page.”

The runners-up were Toring van Jasmyn by Derick van der Walt and Brand by Fanie Viljoen. 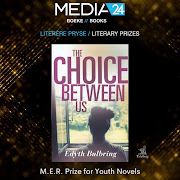 Image: Supplied 'The Choice Between Us' by Edyth Bulbring.

The six judging panels were: