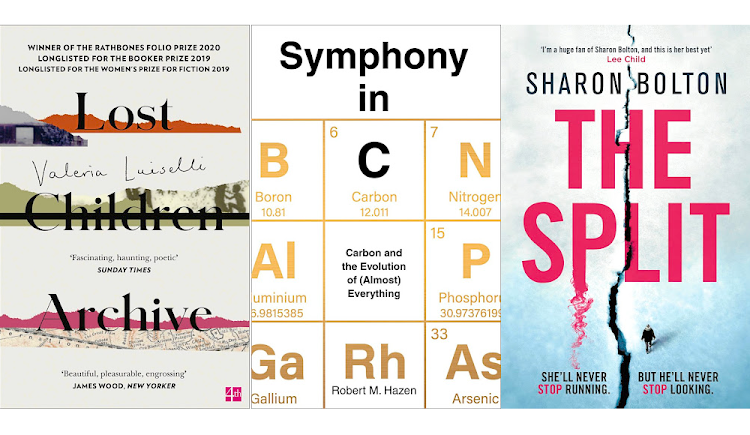 Lost Children Archive is many stories told in one: a modern, blended family taking the all-American road trip. Except, rather than coming together, the family is fragmenting. This tale is layered, with a tender artistic touch, incorporating many other texts, snapshots, and lists. The two children - a girl aged five and a boy aged 10 - are precocious, cheeky joys. But in the background, sometimes roaring to the forefront, are other journeys - that of the lost children. These are the South American refugees who ride on top of railcars, transversing deserts, fleeing danger as they try to reunite with their families in the US. A heartbreakingly beautiful read. Tiah Beautement @ms_tiahmarie

Symphony in C: Carbon and the Evolution of (Almost) Everything ***
Robert M Hazen
William Collins, R320

If the chemical element of carbon were a musical composition, carbon scientist (and gifted trumpeter) Robert M Hazen would have described it as the magnum opus of all the elements found on the periodic table. Hazen's knowledge of this vital element is tangible as he takes the reader on a fortissimo journey tracing the origin of carbon, waxing lyrical about its properties, and exploring its modern monetary value (diamonds and coal). Presented as a "symphony in four movements", Hazen draws on the four basic elements (earth, air, fire and water) as chapter titles to detail the history and significance of carbon. An unusual and fun approach to science writing ("when you kiss, carbon atoms embrace" is a particularly memorable sentence), Hazen unfortunately tends to forget about the scientific neophytes in his midst, ie, there's a reason why "carbon" rhymes with "jargon". Precariously balancing between informative and exhausting, Symphony in C will be regarded as a delightful tribute to carbon by some and evoke high school physics exams anxiety for others. Coda. Mila de Villiers

Don't you hate it when a thriller starts off promising and then develops into a cheesy cliché? The setting, however, is magnificent and the reader is transported to the icy climes of South Georgia, a remote island near the Antarctic. Felicity Lloyd, an expert on glaciers, has decided to run away and hide there to get away from her ex-husband. Then it's a flashback to nine months ago in Cambridge where Felicity has to seek psychological help because of her frequent blackouts. Her psychiatrist, who seems to have never watched a bad psycho drama, falls in love with her and tries to help find out who is stalking her. Not a head scratcher this one - more of an "oh okay, we're doing that again". Jennifer Platt @jenniferdplatt