Fred Khumalo wonders whether we will have learnt any lessons from the coronavirus pandemic in his story, "New World, Old Tricks".

At the beginning of lockdown we asked eight storytellers to pen a work of fiction inspired by the Covid-19 pandemic. Now we have asked them to record the story that they wrote for us during the first few days of lockdown. Some brave authors have read it themselves, and some have got their talented friends to do it. So take a listen to the wonderful tales of Writing the End... Coronavirus, written by some of our very best authors. 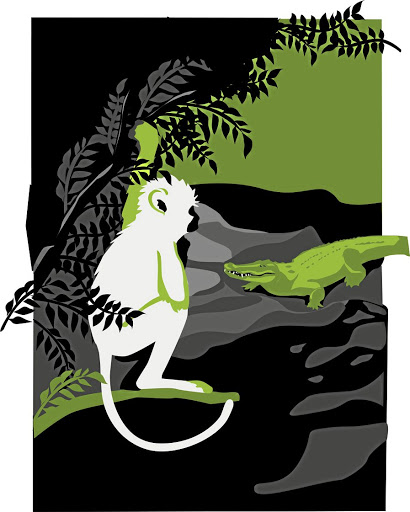 "The monkey, assured that crocodiles in this New World are different, emerges from his hideout."
Image: Keith Tamkei

Although Nyonyo the monkey has been told that animals in the New World are a far cry from the aggressive creatures they were in the Old World, he still does not trust anyone. So fearful is he that on his hunting and foraging adventures he goes out on his own, leaving his wife and two kids at home.

Here he is now, with food expertly tied around his waist, contemplating a fast-moving body of water. Just then, he hears the excited chatter of voices. Quickly, he hides behind a boulder.

When he peers from behind the boulder, he can see a crocodile talking to two cats and the biggest rat he's ever seen.

The monkey, assured that crocodiles in this New World are different, emerges from his hideout.

The crocodile greets. The monkey says, "I'd be happy of your service."

"What do they call you?"

"A celebrated one. In the Old World my patients included the likes of Mufasa, Scar and many prominent lions in a city called Pridelands."

"I'm going to tell my wife I'm now friends with an animal who's not scared of lions! Now, let's go."

The crocodile starts swimming. In the middle of the river, he starts laughing. "A smart monkey fell for my performance!"

"I saw you walking up the river bank, looking for a safe place to cross. I hid and watched. When you heard the voices of cats approaching, you ran into hiding. For the benefit of your stupid eyes, I gave the cats a ride."

"Let me guess, you have an ailing parent underwater?" Nyonyo knows a monkey's heart is a cure for many crocodile diseases.

"Monkeys in this New World are so technologically advanced that every day I leave for work, my wife takes my heart and keeps it in her closet. But I'd be happy to give my old heart to your mother. I can always manufacture a new one chop-chop."

When the crocodile arrives on the other side of the river, the monkey jumps off. "Wait here." The monkey disappears behind a tree. Returning, his hands are held at his back, hiding something.

"Crocodile, I've got the heart. Just open your mouth wide and I'll chuck it in."

The crocodile does as told. With all his might, the monkey hurls a rock as big as his head into the gaping mouth.

Blood explodes as the sharp rock hits the back of the crocodile's maw. The crocodile coughs. And lies still. Dead.

The monkey scoffs: "Stupid crocodile, you should have stayed in the Old World with those stupid humans and their greed-inspired diseases."

"He feels a terrible need to stop time, to clearly see the moment his death was rolled into place."
Books
6 months ago

Karina M Szczurek imagines how the coronavirus pandemic will play out in her story, "Toni's Touch".
Books
6 months ago

Ekow Duker puts a face to the masses of medical professionals who are having to leave their families in order to save yours in "Themba".
Books
6 months ago
Next Article