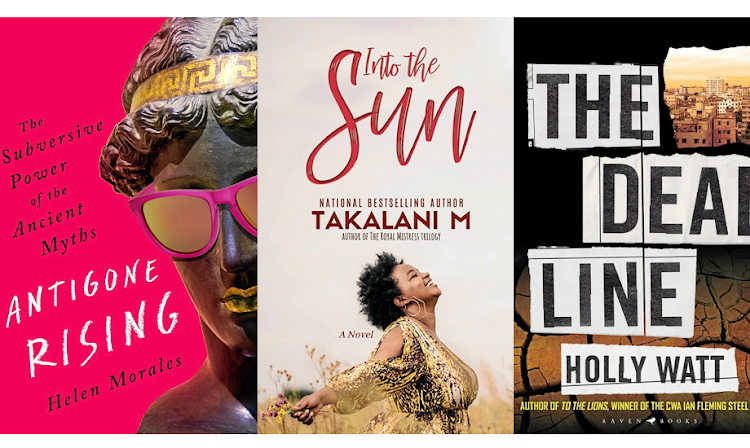 'Antigone Rising', 'Into the Sun', and 'The Dead Line'.
Image: Supplied

"Who owns classical antiquity," Helen Morales asks. "Who owns culture?" Her answer: "We do." In this easy to digest book, Morales dives into the old myths, puts them into context, and examines their subversive power as the stories have evolved and reclaimed. From school shootings, to Diana, to #Metoo, to Beyoncé, to the diet industry, and gender identity: Morales presents a new perspective to both our past, present and our future. An engaging read. Tiah Beautement @ms_tiahmarie

It's a love story that begins around two tragedies. A year after Thandeka gave birth to her stillborn daughter, businessman Gundo almost runs into her with his car on his way to bury his teenage son. It's a long and windy route that Thandeka and Gundo take before they finally end up together. Even when they do, they still experience problems. Having lived a humble life, Thandeka's insecurities threaten her confidence in their relationship. Meanwhile, Gundo's bitter ex-wife won't let Thandeka forget who she was. Things then get crazy with Gundo being bewitched with muti. When they take their glorious walk into the sun, you'll breathe a sigh of relief. Addictive reading. Chrizelda Kekana

It's intriguing to read books set in fictional newsrooms with intrepid reporters writing for justice. This time it's London daily The Post and the derring-do journo is Casey Benedict, who we were introduced to in Watt's award-winning bestseller The Lions. The dialogue in The Dead Line is a bit forced and difficult to get into, but once you get past the gumph and into the main story, the action takes off. The story begins when the fashion editor picks up a piece of clothing with a hidden message sewn into its seams: "They take the girls" - and this sets Casey off on a mission to find out what it means. Jennifer Platt @Jenniferdplatt