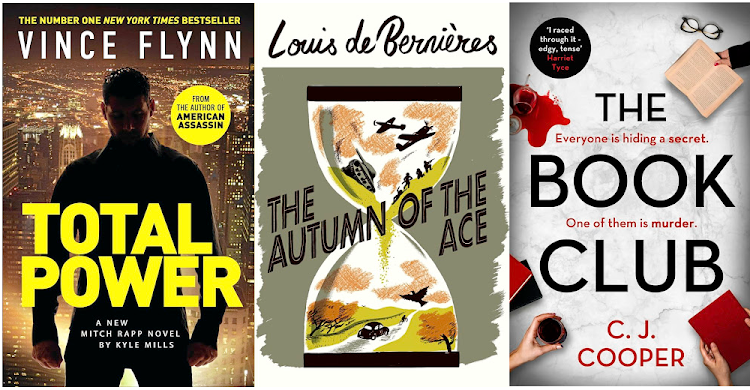 The latest Mitch Rapp novel, Louis de Bernières's remarkable 'The Autumn of the Ace', and a domestic noir in which a book club is more than it seems.
Image: Supplied

In the latest Mitch Rapp novel, the US is plunged into darkness after a cyber terrorist takes out the electrical grid. With only 2% of the US population in food production for both itself and much of the world, hunger and thirst sets in within a week, creating uncontrollable chaos. Unless Rapp manages to locate the cyber terrorist, it will take at least a year to restore power. By then, 90% of the US population will be dead. "The most terrifying thing about writing this book," says Mills, "was how little I had to make up." A terrifying thought, indeed. Tiah Beautement @ms_tiahmarie

Daniel Pitt was a fighter pilot in World War One and served in the second World War. We meet him in this literary novel about unconventional love as an older man with plenty of life left in him. He is estranged from his wife, Rosie, and his son but is happily involved with two women - Gaskell and Christabel, partners who are content that the other one is involved with Daniel as well. The two women are artists, facing up to the new in the post-war years. It's a novel that covers practically every human emotion you can imagine; never mawkish, full of joy and sorrow, and the cadence of memory. Jennifer Crocker

Lucy flees London after a disastrous affair with her boss that ended after they had sex in a lift at work, which most of their colleagues heard about. With her confidence shaken, she struggles to make friends in a small village. After some months she is accepted into a circle of neighbours who meet for coffee and gossip. Then Alice moves in next door. Lucy senses hostility but is not sure why and is wary around her. Alice ingratiates herself into the clique and suggests they start a book club. They kick off the club but every meeting ends in tears; Alice has been snooping around, following people and uncovering their secrets. What does she want and why did she come to the village? The pace of the narrative escalates as Alice's motive is revealed. Gabriella Bekes