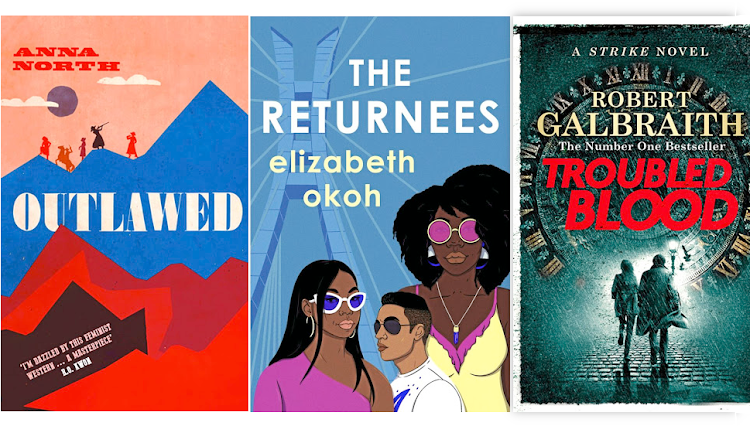 Outlawed is a queer feminist Western set in an alternative history during 1894. Ada survived the Great Flu and married before 18, as was her duty. But even her background as an apprentice midwife was not enough for her to conceive. Cast out from her town as a witch, and fearing for her life, she finds herself part of the Hole in the Wall Gang. Yet even as she learns to shoot and to ride a horse, she continues to dream of a future where she can work as a midwife and do proper scientific research. Unique and intriguing. Tiah Beautement @ms_tiahmarie

Okoh is one of the new generation of African authors writing about home from the diaspora. Here she tracks the story of three young adults returning to Nigeria from London. Each has their own reason for going back, and the intersections of their lives is beautifully managed. Osayuki Idahosa leaves behind her job in PR after a shattering betrayal by the man she lived with. She is savvy, smart and has a job lined up in Lagos. Cynthia Okoye is a graduate whose parents have had enough of her ennui and pack her off to Nigeria to take part in the National Youth Service. She is peeved about being sent "home", but discovers choices to be made within constraints. Kian Bajo wants to be an Afrobeat star, and plans to make it big in Nigeria. Witty and filled with life lessons. Jennifer Crocker

A looming lockdown weekend and at hand nothing exciting to read makes for desperate decisions. Why else grab a detective story by an unheard-of author? By the time I was halfway through, all reservations had vanished and I had been bowled over - crisp writing, a deceptively simple plot that kept throwing up spine-chilling switchbacks, and fascinating characters rendered with Dickensian clarity and wit. What a literary find I'd made, I exulted. That's when a quick squiz at Google embarrassingly revealed that my triumphant "discovery" was none other than JK Rowling, writing under the pen name Robert Galbraith. When Rowling published her first Galbraith novel - this is the fifth - I avoided it on the basis that authors rarely manage to switch genres successfully. I was wrong. On the upside, I now have four earlier novels to look forward to.
William Saunderson-Meyer @TheJaundicedEye

Joe Biden's very human story about carrying on as you grieve, a sharp, perceptive and powerful novel drawing on true crime events, and a beautifully ...
Books
1 year ago