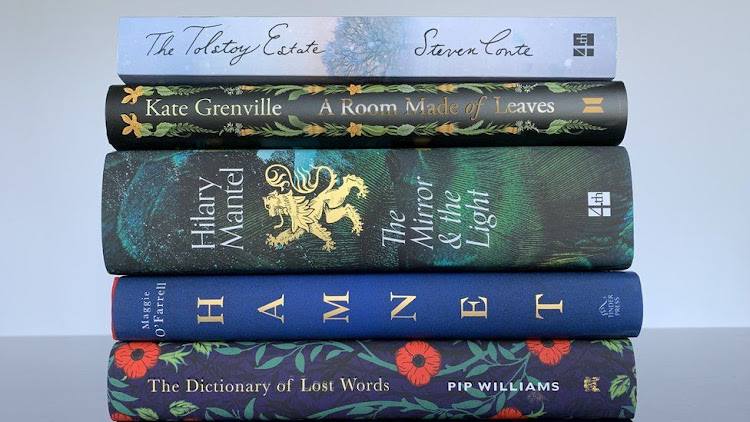 The 2021 shortlist for the Walter Scott Prize was announced on March 23.
Image: Supplied

The five book shortlist has been announced for the 2021 Walter Scott Prize for Historical Fiction. The shortlist is:

A ROOM MADE OF LEAVES by Kate Grenville (Canongate/Text Publishing)

THE MIRROR AND THE LIGHT by Hilary Mantel (4th Estate)

‘For the first time in the history of the Walter Scott Prize, Australian authors comprise the majority of our shortlist. With imaginations and styles as varied as they are inspired, we have Pip Williams slipping us gently, hauntingly, into the Oxford English Dictionary; Steven Conte’s unflinching weaving of war and peace in the shadows of Tolstoy’s estate; and Kate Grenville expertly stitching the unreliable but compelling testimony of the remarkable Elizabeth Macarthur into an exploration of the meaning of home. And as if this wasn’t riches enough, we are launched so vividly into Tudor England with Hilary Mantel and Maggie O’Farrell that we live and die — what a death! — with Cromwell, and die and live, through a heart-crunching transformation, with Shakespeare’s son Hamnet. In short, the 2021 Walter Scott Prize shortlist isn’t just a masterclass in writing, it offers readers five experiences they’re unlikely to forget.’

First awarded in 2010 to Hilary Mantel’s Wolf Hall, and sponsored by the Duke and Duchess of Buccleuch, the Walter Scott Prize for Historical Fiction honours the inventor of the historical fiction genre, Sir Walter Scott, and this year will join the celebrations for the 250th anniversary of his birth. The prize judging panel comprises Katie Grant (chair), Elizabeth Buccleuch, James Holloway, Elizabeth Laird, James Naughtie and Kirsty Wark.

The winner will be announced online and through media partners in mid-June.

ABOUT THE SHORTLISTED BOOKS

‘Yasnaya Polyana lies 120 miles south of Moscow and in 1941 was close to the Russian-German front line. The former home of the Count Tolstoy was occupied by the Germans as a military hospital. It is where Paul, a German surgeon, encounters Katerina, the Russian curator of Tolstoy’s legacy. War and Peace, inspired by Napoleon’s invasion of 1812, is their common cultural bond. The parallels between 1812 and 1941 are vivid and terrifying, and obvious to both. It is a testament to Steven Conte’s brilliant writing that comparisons with Tolstoy’s masterpiece do not seem excessive.’

‘From the first page of this hauntingly beautiful novel, the character of Elizabeth Macarthur captivated the judges. The first-person account of her move as a young bride, from Devon to New South Wales soon after the birth of the colony portrays this real-life figure in Australia’s story as strong, compassionate and canny. Kate Grenville’s wonderful prose carries the story along but allows the reader time to reflect on the discoveries Elizabeth makes about herself and her relationship with this new land. Grenville imagines the early settlements and the vast emptiness, and Elizabeth’s place in them, vividly, and deftly reveals the way in which through her own endeavours, and her increasing bond with nature, Elizabeth shifts from being a reluctant immigrant to an Australian in heart and head.’

THE MIRROR AND THE LIGHT, Hilary Mantel
4th Estate

‘The third volume of Hilary Mantel's Thomas Cromwell trilogy crowns an astonishing achievement. The Mirror and the Light is a magnificent study of how the paranoia of a tyrannical king devastates all those around him as the life of Cromwell reaches its inevitable end. We know what will happen, and yet Cromwell, enigmatic, ruthless and the master of the sideways riposte, has so engaged our sympathies that we want him somehow to escape, and we loathe the men who betray him. It's hard to think of any other writer who could keep the reader so enthralled through almost 900 pages.’

How wide do you open your arms?

Sue de Groot reviews a collection of essays by Hilary Mantel, possibly the greatest writer of our global generation, whose interests and areas of ...
Books
1 year ago

‘O’Farrell’s Hamnet is the novel about Shakespeare you never expected to read, in which he spends much of the time offstage, letting his family tell their story. It turns around the figure of his son who dies early in the narrative aged only 11, but shapes the story told in his name, through his twin sister and their mother, whom O’Farrell calls Agnes, and their grief. This is rich historical fiction, bringing to life the English countryside at the end of the sixteenth century with as much vigour as the tumult of London and exploring a world in which life is as fragile and uncertain as the turbulent politics that envelop everyone. O’Farrell writes with zest and confidence, and a poetic touch that allows her to deal boldly with the other life of the poet who took his son’s name to help create his most enduring dramatic figure. A bravura performance.’

Maggie O'Farrell's fictionalised account of the story behind Shakespeare's most famous play is spellbinding, writes Kate Sidley
Books
2 years ago

‘In an extraordinary first novel Pip Williams immerses us in the creation of The Oxford English Dictionary. Seen through the curious eyes of Esme, daughter of one of the editors, it spans four decades, skilfully interweaving her growth to adulthood and work on the project with seismic changes sweeping the country, the demand for women’s right to vote and the tragic impact of the 1st World War. The arbitrators of words that found their place in it were all men, but through Esme we realise that not all words are valued equally, and that words that matter to women, that have meaning for different social classes, were ‘lost’. With lyrical writing and beautifully drawn characters, this is a deeply moving novel with a powerful message for our own times.’

Following on from the Sunday Times number one best-seller, 'The Burning Chambers', Kate Mosse’s 'The City of Tears' is the second thrilling ...
Books
1 year ago

"A historical novel can’t make claims beyond its function."
Books
2 years ago