‘The book world has lost an icon’: We remember Jonathan Ball 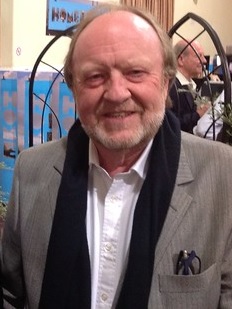 Local publishing stalwart Jonathan Ball will be remembered for the pinnacle he was in the SA book world.
Image: Supplied

We cannot imagine a South African landscape without the publisher Jonathan Ball.

Jonathan Ball founded his publishing company in 1976 and went on to become a leading publisher and distributor. He passed away at age 69 on April 3 in his home in Cape Town.

We at Sunday Times will always remember him for his fearlessness, insight, brilliance, sharp sense of humour and, most of all, his historical role in the book industry.

The book world has lost an icon.

We send our deepest condolences to his family, friends and our colleagues at Jonathan Ball Publishers (JBP) as they bid farewell to the legendary Jonathan Ball.

This is an article that best describes who Ball is and was, written by the immensely talented Michele Magwood, when he retired in 2015.

We will forever remember him as this magnetic person with his acute perceptions and his extraordinary charisma.

Jonathan Ball is a giant of a man - in size, in appetite, in vision, in influence. He is a bon viveur who doesn’t suffer fools, a deep reader with acute commercial nous, a gruff taskmaster and an adoring family man, lethally funny but sometimes abrupt to the point of rudeness. He is also surprisingly modest because if he is a giant of a man, he is a colossus of a publisher. And as such, he has had a profound effect on this country.

On a Friday afternoon in his smart, light offices in Woodstock, Jonathan is getting ready to travel to London, checking the speech he will be making to a gathering of the UK publishing elite.

He has announced he is stepping aside as CEO of the company he founded 40-odd years ago, and for two hours he ranges over the past, present and future of publishing, remembering lawsuits and police raids, speaking of his admiration for Helen Suzman and Thuli Madonsela, segueing between Biggles and Simon Schama and Thomas Pakenham.

Beloved stories go from the page to the moving picture

A look at the screen adaptations of Kristin Hannah's 'Firefly Lane' and 'The Nightingale'.
Books
6 months ago

“I started out as a rep for Macmillan and I travelled the entire country, Nambia and Zimbabwe too, and that was a great advantage. Then Soweto quite literally burst into flames and one was aware there were going to be landmark changes in SA. I wanted to publish books about it.”

He founded Jonathan Ball Publishers at the age of 27, with the express intention of publishing books “of a liberal sanity that pandered neither to the left nor to the right”. He was also determined to win the lucrative British and American agencies that would bolster his local publishing.

The eminent editor Alison Lowry was there at the beginning when Jonathan had begged a loan and an office from his brother at his air-conditioning plant in Selby.

“There were two desks, a telephone and a cement floor and it was so cold I’d wear my slippers to work. Whenever Jon had to make an ‘important’ call, like to a publisher in the UK that he was trying to secure as an agency, I had to stop typing on my typewriter and keep tjoepstil so Jon could sound like he was in the warm, big, tastefully furnished office he aspired to occupy one day… if we could only get an agency. He did, too: he got Hodder & Stoughton exactly that way.”

In that tiny office the pair of them would sit with the slush pile and conduct what they call the First Line Test, reading out the first lines of manuscripts they’d received.

“I’ve found that if it doesn’t start well it doesn’t become good,” he says.

Alison would read out the first lines “and like the Roman Emperor I’d give a thumbs up or a thumbs down”.

Nick Britt was also there at the start, and he well remembers the book that really put JBP on the map: The Super-Afrikaners.

Jonathan had commissioned the book from journalists Ivor Wilkins and Hans Strydom and the content was incendiary, an expose of the Broederbond that would shake the Nationalist government.

“No printer wanted to touch the book,” says Nick.

Eventually Jonathan found a small printer to do it, and then hired a truck and drove the book blocks to a binder himself to have it bound.

“It took a huge amount of courage, energy and sheer guts and determination to get the job done.”

The five book shortlist has been announced for the 2021 Walter Scott Prize for Historical Fiction.
Books
6 months ago

These are the qualities that have established JBP as the market leader in this country, “although competitors of mine might be irritated by that”. he smiles. These, and his unending interest in local and world history and politics.

The historian Charles van Onselen - who credits Jonathan with steering him to the subject by giving him free history books when he was penniless - says: “Jonathan has done so much to have kept high-quality history writing in front of the eyes of our very small reading public. He’s a very widely-read, highly intelligent reader of history but also one who can, when necessary, see the importance of certain works that might not always produce financial gain for his company.”

It is not surprising that JBP has won more Sunday Times Alan Paton awards than any other publisher. Two of them have been won by Jonny Steinberg, who many think Jonathan “discovered”.

He dismisses it gruffly.

“Jonny found me. He submitted a manuscript to me and I was glad to sign him up.”

He has a nose for timely books, though, and he has commissioned many.

“Mark Gevisser was writing profiles of Thabo Mbeki for the Sunday Times and I went to see him and asked him for a biography. I don’t for one moment claim I inspired him to write it. And I encouraged him along the way.”

That turned out to be a long way: Thabo Mbeki - A Dream Deferred took eight years to write but it hung another Alan Paton award on the office walls.

He also mentions Antony Altbeker, RW Johnson and Michiel Heyns but declines to name more of his stand-out books. “Because I’ll leave someone out and make people embittered, and as Voltaire said on his deathbed, when he was asked to renounce the devil, ‘It’s no time to be making enemies.’”

He smokes prodigiously, drinks fine wine and, if they’re lucky, sings opera in a deep, well-lubricated baritone to dinner guests.

The Voltaire quote is typical. He peppers his speech with poetry, first lines from literature, snippets of great speeches.

Nick Britt shared a digs with him once.

“I’d be woken up at night by the collected speeches of Winston Churchill being played at high volume and with full audience participation. That sort of showed his priorities.”

He smokes prodigiously, drinks fine wine and, if they’re lucky, sings opera in a deep, well-lubricated baritone to dinner guests. He is, as one friend remarked, “a passionate man of Rabelaisian proportions”.

He is slyly funny, such as on the subject of adult colouring books (“saddening”) and 50 Shades shenanigans. He can also, it is said, rattle the windows when he is in a rage, but the squall blows over quickly.

Jonathan was one of seven siblings and it could be argued he learned to make himself heard at a young age. The house in Johannesburg was full of books.

“My father wasn’t a man who could afford to buy new books,” he says. “He bought his books at the Toc H shop, but nevertheless they were there.”

“There was no television; you read.”

On the state of current publishing he is bullish. “Electronic books are important but I’ve not for one moment thought they would actually kill the real book.”

There’s a trend towards shorter books, he says, because attention spans are shortening, but he believes there will always be a market for big, well-written books.

He promises there will be many more from JBP and for that we must be grateful. For without his books South Africa would be poorer, our understanding of ourselves diminished or dormant, our history unleavened, or worse - unrecorded. He won’t hold with that view, though.

JENNIFER PLATT | Throw a thriller at me any time, especially one by CJ Tudor

In just a few years, the author looks set to knock master-of-suspense Stephen King off his perch
Opinion & Analysis
6 months ago

'Years of Fire and Ash: South African Poems of Decolonisation', brings together some of the most remarkable and thought-provoking poems that have ...
Books
7 months ago

I realised that even though things are getting easier in many places, there is by no means an “over the rainbow” fairy-tale ending for LGBTQ rights ...
Books
8 months ago