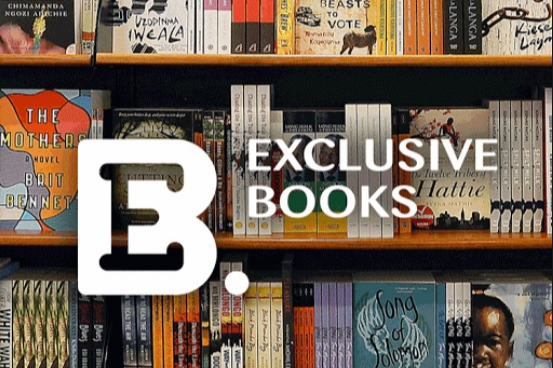 This year, Exclusive Books celebrates 70 years of getting more books to more people.

Exclusive Books opened their first store on King George Street in Johannesburg in 1951 and have since expanded to 41 brick-and-mortar stores and the virtual www.exclusivebooks.co.za.

Exclusive Books will mark this happy milestone in a year peppered with celebratory plan — special promotions, book donation drives, story-sharing and rewarding their most loyal customers, their Fanatics.

Nearly 70% of the selected books are local, testament to the post-lockdown publishing explosion at home and around the world.

Greenwich Park by Katherine Faulkner is a fantastically addictive read. It is pacy and there’s a real sense of dread on every page. There are fabulously unpleasant characters  and a beating feminist heart.

Project Hail Mary by Andy Weir is an original, compelling and fun voyage.

Suitcase of Memory by A’Eysha Kassiem is a delicately wrought novel that cuts into the fabric of SA’s dark history. Utterly compelling and riveting.

In The Promise, local author Damon Galgut extends his extraordinary corpus with a rich story of family, history and grief.

The Dictionary of Lost Words by Pip Williams is a gentle, hopeful story that will be a balm for nerves frazzled by the pandemic or patience fried by sexism.

The Hitchhiker’s Guide to the Galaxy: Illustrated Edition by Douglas Adams is a beautifully illustrated version of the New York Times bestselling cult classic celebrating the 42nd anniversary of the original publication — with all-new art by award-winning illustrator Chris Riddell.

The Midnight Library by Matt Haig is a celebration of the ordinary: ordinary revelations, ordinary people  and the infinity of worlds seeded in ordinary choices.

The Seven Sisters series sees Lucinda Riley at the top of her game: she is a magical storyteller who creates characters we fall in love with and who stay with us long after we finish reading. Her latest book, The Missing Sister, is what we’ve all been waiting for.

The Scandalous Times of a Book Louse by Robert Muponde is a marvellous and deeply immersive coming-of-age tale.

Remembering by Andile Gaelesiwe is a story of courage, truth, love and forgiveness.

Join Ivan Johnson in his memoir But He Speaks So Well of an identity crisis as a high-spirited boy from a close-knit family on the Cape Flats who becomes a man amid the turmoil of the struggle. Told with flair and irreverence, Johnson’s sharp eye and zest for life gives both food for thought and great entertainment.

Consequences of Capitalism by Noam Chomsky and Marv Waterstone is an essential primer on capitalism, politics and how the world works.

Cleaning Up Your Mental Mess by Dr Caroline Leaf reads like a manual to guide you to a better and healthier place in life.

Andile Gaelesiwe is celebrated across SA as the adored host of Khumbul’ ekhaya on SABC 1. Yet few know that behind the glamour of her public image, ...
Books
7 months ago

Put simply, Empire of Pain by will make your blood boil. Patrick Redden Keefe paints a devastating portrait of a family consumed by greed and unwilling to take the slightest responsibility or show the least sympathy for what it wrought.

Just A Moment: A Memoir by Schalk Burger Snr with Michael Vlismas is a glimpse into the life and times of one of the country’s most recognised figures, and told in the stories of the many lives that intersected with his.

Notes on Grief is an exquisite work of meditation, remembrance  and hope, written in the wake of Chimamanda Ngozi Adichie’s beloved father’s death in the summer of 2020. Expanding on her original New Yorker piece, Adichie shares how this loss shook her to her core.

What better way to honour our moms than with the gift of a book. Jennifer Platt has some great new recommendations.
Books
8 months ago

The Bomber Mafia by Malcolm Gladwell is a thought-provoking, accessible account of how people respond to difficult choices in difficult times. Gladwell’s easy conversational style works well and his admiration for World War 2’s Bomber Mafia shines through. His portraits of individuals are compelling.

In the well-researched The Economy on your Doorstep, author Ayabonga Cawe, a development economist, columnist and broadcaster, makes sense of the post-apartheid political economy through the lives of the many people who live and survive in it every day.

The Great Pretenders: Race and Class under ANC Rule by Ebrahim Harvey is a timely and critical intervention in current public discussions on race and racism.

YA and children’s titles

Musician Billie Eilish shares an intimate inside look at her life — both on and off the stage — in Billie Eilish, a stunning, photo-filled book.

Stepping nimbly among the liminal spaces and eerie real-world haunts of our heroine's cipher-sister, this haunting modern fairy tale House of Hollow by Krystal Sutherland will wrap you up like a glittering fog, before going for your throat.

Terry Denton's Really Truly Amazing Guide to Everything is a mini-book of facts packed with maximum humour! Sure to engage anyone from the ages of eight to 80 (and beyond), this is a funny, fascinating whistle-stop tour of the history and science of the universe.

The Girls I’ve Been by Tess Sharpe is a non-stop thrill ride. It jumps back and forth from the robbery in progress to Nora's earlier life with her mother, a con woman married to a dangerous man. It's well done, and extremely cinematic.

Youth Month: tackle illiteracy one book at a time

With June being Youth Month, READ Educational Trust encourages all South Africans not to turn the page on our children's fundamental freedom to learn ...
Books
7 months ago

To launch 2021, Exclusive Books will use January to promote "RESET" – a selection of books to guide readers on how to hit the refresh button, from ...
Books
11 months ago