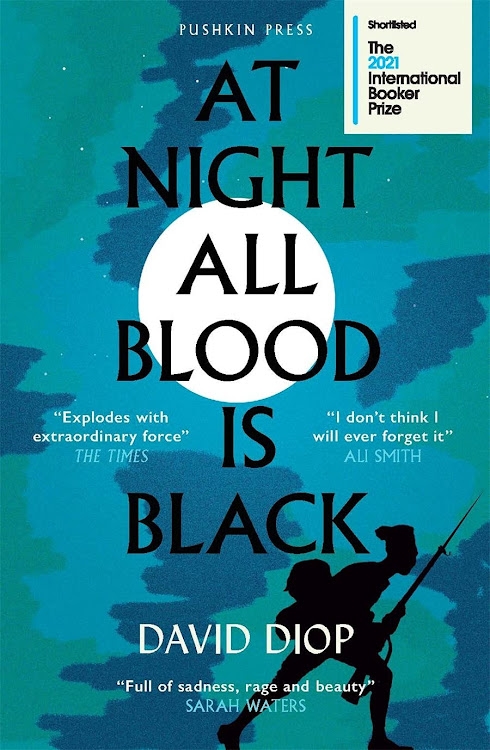 'At Night All Blood is Black' was originally in published in 2018 as 'Frère d'âme'.
Image: Supplied

At Night All Blood is Black by French author David Diop, translated by Anna Moschovakis, has been announced as the winner of the 2021 International Booker Prize.

Diop is the first French novelist, and first writer of African heritage, to be awarded the International Booker Prize.

Alfa and Mademba are two of the many Senegalese soldiers fighting in the Great War. Together they climb dutifully out of their trenches to attack France's German enemies whenever the whistle blows, until Mademba is wounded, and dies in a shell hole with his belly torn open.

Without his more-than-brother, Alfa is alone and lost amid the savagery of the conflict. He devotes himself to the war, to violence and death, but soon begins to frighten even his own comrades in arms. How far will Alfa go to make amends to his dead friend?

At Night All Blood is Black is a hypnotic, heartbreaking rendering of a mind hurtling towards madness.

Rwandan-born Namibian author Rémy Ngamije has won the 2021 Commonwealth Short Story Prize (Africa) for his story Granddaughter of The Octopus.
Books
4 months ago

The five book shortlist has been announced for the 2021 Walter Scott Prize for Historical Fiction.
Books
5 months ago

Scottish-American author Douglas Stuart was announced as the winner of the 2020 Booker Prize for his autobiographical novel 'Shuggie Bain' on ...
Books
10 months ago