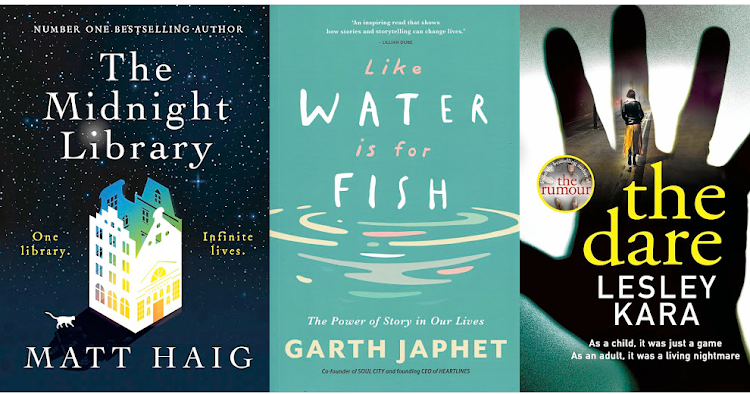 Nora's life sounds like a bad country song: her cat died, she's lost her job, her parents are dead, her brother and best friend have stopped speaking to her, and she lives all alone. So she ends it all, only to end up in the Midnight Library. Here, with her wise librarian guide, Nora can experience different lives: what if she'd kept swimming; what if she stayed in the band; what if she's married that man; what if she'd studied a different degree. Because "the only way to learn is to live", and Nora has a lot to learn about living. A sweet, philosophical adventure, with some cracking wit on what it means to be alive. Tiah Beautement @ms_tiahmarie

Garth Japhet thought he was meant to be a doctor. As a child he read the Jungle Doctor books and was so touched by the stories, he knew his future was in medicine. Even though he was told he was wrong (his dad gently tried to tell him) Japhet was determined to follow his dream. He realised his dad was right. He describes the early years of medicine, including dissection, as a "descent into hell" and says it was his friends and his Jungle Doctor vision that got him through medical school. But being an actual doctor wasn't any better than med school and Japhet finds himself sinking into a deep depression. Then, through the darkness, it hits him. If a story changed his life, could he use stories to change other people's lives? His journey to co-founding Soul City and founding Heartlines emerges. Both platforms merge health topics into storylines for TV, radio and print publications. The edutainment programmes have been praised for addressing critical health issues and reaching people who would likely not have had the opportunity to learn about health topics before. Japhet, through his own struggles, became a pioneer. Jessica Levitt

It's a pity we are not flying as much as we usually do, as this would make the perfect airport read. It's a bingeworthy psychological thriller about Lizzie, who was 13 years old when her best friend, Alice, was crushed by a train. Lizzie was there but had an epileptic seizure and can't remember anything. Alice's sister Catherine blames Lizzie for the death and starts threatening and bullying her. Lizzie and her parents eventually move and Lizzie puts it all behind her. Now she is living in London, engaged to a doctor, and pregnant. This is the life she yearned for, but something is nagging at her, and she feels something is going to happen to upset her wonderful life. It does: Catherine comes back into her life. From then on, it's all shifty, twisty and deliciously dark. Jennifer Platt

An original book about a Hotel California-esque boarding school, a compelling read about a man who spent over two decades in solitary confinement, ...
Books
1 year ago