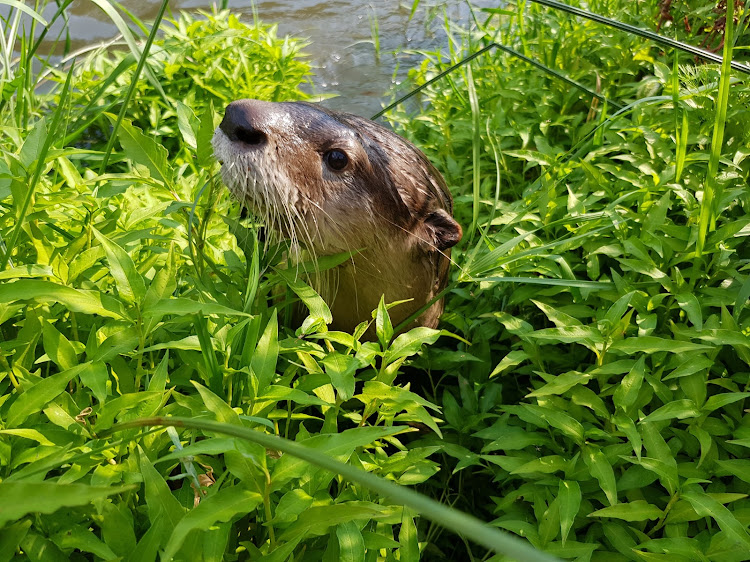 A curious Lazarus peeking out from his new surrounds.
Image: Danelle Murray

Espoused duo Brendan and Danelle Murray, founders of the Owl Rescue Centre - an NPO situated in Bokfontein - recently co-wrote Return to the Wild: an entertaining and enlightening read which covers the process of rewilding a captive-raised Cape clawless otter, christened Lazarus.

Focused primarily on the release of this curious and playful aquatic mammal, Return to the Wild also provides an insightful look at wildlife conservation in SA and the role the Murrays play in the preservation of our country's biodiversity.

1. Briefly give an overview of the work you and Brendan do at the Owl Rescue Centre, and how you happened to be involved with the release/'re-wildling' of Lazarus.

Our work is primarily focused on owl conservation, which involves rescue, rehabilitation, and release of owls back into the wild. We are also an awareness organisation for owls and other wildlife. We have several projects in place for habitat conservation, which we feel are an important element of our work – not just protecting a species, but also the environment in which it lives. Our initial idea was to give attention to one species, and we picked owls because they were the species we believed at the time, that most needed our help. Since then, the need to diversify has become relevant and we are often asked to help with species that are not owls. This was the case with the otter. The vet who raised Lazarus had worked with us on cases before and knew that she could trust us to help with Lazzy (the otter).

2. The conservation status of otters is something you write extensively about, yet there seems to be little known about their vulnerable status. Please elaborate on the factors contributing to their declining numbers.

The most pressing concern is loss of habitat. Otters need a healthy ecosystem to live in (this is also the reason they are considered bio-indicator species), which there is little left of these days. Pollution and poor waste management, among other things, have destroyed their habitat. Not to mention hunting and persecution. 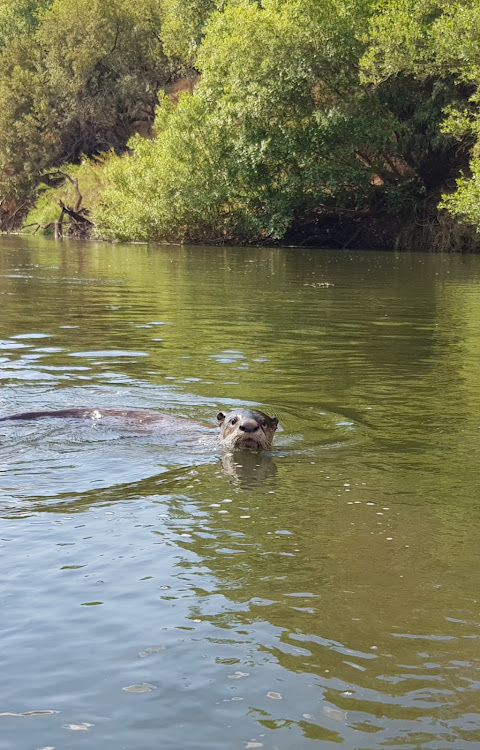 3. Brendan's love of otters was inspired by watching Ring of Bright Water as a young 'un, and he also had the privilege to study otters in the Okavango Delta. You, on the other hand, write about your (numerous) futile attempts at spotting a Cape clawless otter - the animal you most longed to see. Please comment on why they are such remarkable creatures, and how working first-hand with Lazarus cemented your fascination with otters.

I had never seen a wild animal quite as jolly and spirited as an otter. They seem to enjoy life to the very fullest, which is an admirable quality. Otters are also one of the most intelligent animals on the planet, which Lazzy had proven again and again during the time we worked with him.

4. One of the challenges you faced with the release of Lazarus was his (rather unusual) fear of water. How did you go about 'conquering' this phobia?

This is where my background in psychology served me well. I believe people and animals are not that different from each other. We managed to desensitise Lazzy of his fear of water by systematic exposure to it. We would, for example, place his food inside the ‘pool’ in his enclosure, which meant that he had to get into the water to get it. We would later do the same in the river. The next step was achieved through social learning. Young otters learn to swim by watching their mothers. Animals are capable of social learning. This meant that Brendan and I had to get into the river ourselves, which encouraged Lazzy to do the same. We had daily swims of up to six hours with him. 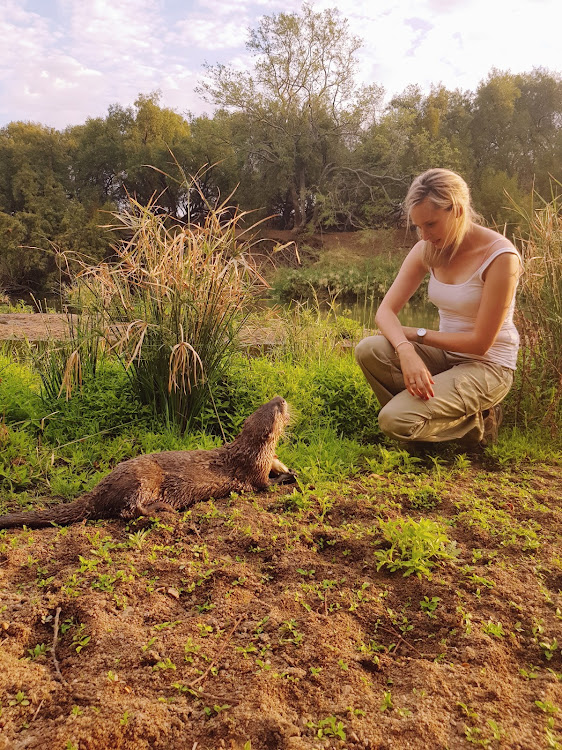 5. Conservation efforts in SA are thwarted by various factors including lack of funding, insufficient wildlife conservation education, wild animals eradicated by livestock farmers (increasingly so with caracals and jackals in the Karoo), and even - in your case - petty jealousy.

The question is: how can this be remedied?

Maybe one day people will realise our (humans) interdependency on the natural world. When this happens, it will be possible for an all-encompassing approach to secure a future for these animals. But unless people start by shifting their focus away from individual personal gain and onto wildlife conservation, we are surely fighting a losing battle. There is a bigger picture that needs to be understood here.

6. A disconnect from the natural world is another topic you touch upon, writing, “I believe that the human-animal relationship and our connectiveness to nature is the key to a healthier and happier world ... It is sad, then, that so many children grow up without any contact with animals - especially in African countries where poverty prevails.”

In what way can a connectiveness to animals be nurtured in our country, which is permeated by socioeconomic disparities?

A child may not have the means to care for a pet at home but can be exposed to and taught about animals in many ways. I feel that it should be part of the school syllabus. I will tell you a quick story: A few years back, a school group from an underprivileged community visited our centre. One of the little girls was terrified of animals, even small and completely harmless ones. I realised that she had never been in contact with an animal, and therefore feared them. We often fear the unknown.

“I was determined to help her to overcome her fear. I gently introduced her to our Labrador retriever named Baylee and told her the story about how Baylee ended up with us. I explained that Baylee likely felt fear just the same as what she is feeling, when she first arrived at the centre. Explaining to her that animals can feel emotion similar to our own, helped to establish a mutual ground between them and she started warming to Baylee. Before the end of their visit, Baylee was her best friend. Her teacher told me afterwards that she couldn’t stop talking about how much she loved Baylee; she said that it completely surprised the girl’s mom. Exposure is therefore key. I also believe that, through storytelling, we can cultivate a love for animals. It is for this reason that writing this book was so important to me. 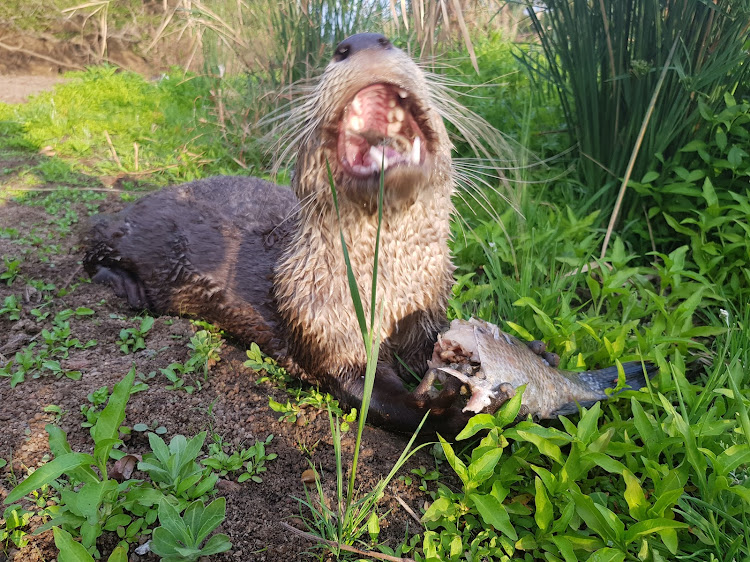 Lazzy proudly showing off a catch. (And a full set of mandibles.)
Image: Danelle Murray

7. One cannot read a book about people who's daily lives revolve around working with, and rehabilitating, wild animals without either anthropocentrism or anthropomorphism entering the subconscious. What has your experience been as

a) a witness to anthropocentrism?

In our line of work, one is constantly reminded how much people value their own needs over the life of an animal, whether it’s done consciously or subconsciously. For example, the person who loves the owls that catch their rats but end up using poison because the owls didn’t catch them fast enough. “The rats were causing so much damage” they would say, and care less about the effect their actions had on the owls. During one of our fundraisers, we were highly criticised for ‘wasting’ funds and resources on animals when there are so many suffering people out there. Little do they know how much resources are spent constantly uplifting people and how little attention is given to animals in comparison.

and b) a falsely accused 'culprit' of anthropomorphism?

Within the wildlife sphere individuals and organisations can be very critical of each other’s work and their differing viewpoints. We have been criticised as being ignorant when we ascribe human-like characteristics and emotions to an animal, as we did in the case of Lazarus. We would never offhandedly ascribe humanoid qualities to an animal, but some behaviour in animals is undeniably similar to our own. 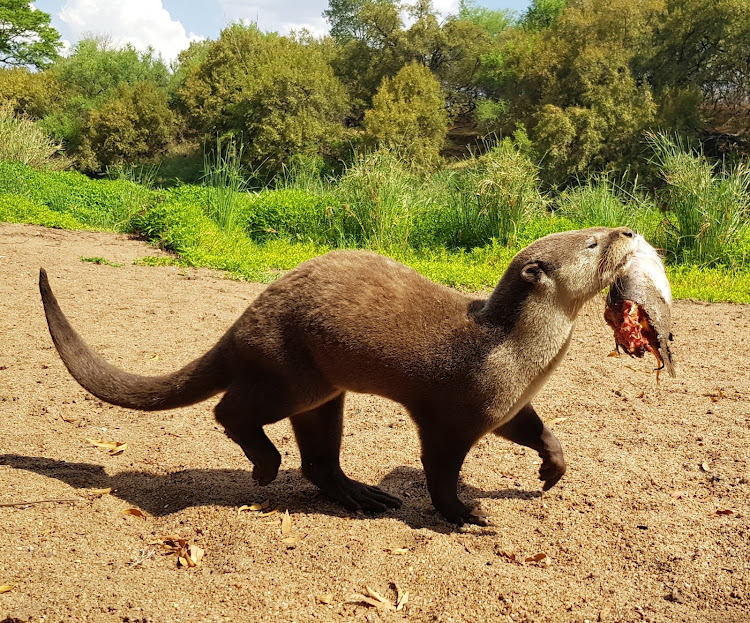 8. You shared Lazarus's story via the Owl Rescue Centre's Facebook page (which has more than 78,000 likes) and he accumulated quite the fan base! What role does social media play in raising awareness of the work that you do?

Social media is certainly a great platform to create awareness for our work. We can reach thousands of people within minutes. This was never possible before and has made wildlife education a whole lot easier. Social media has given us not only a national platform from where we can advise, educate, and assist, but an international one. We get calls and messages from all over the globe asking for our help. It has also been great for networking, which means that if someone in the middle of nowhere finds an injured animal, we can arrange that the animal gets help as soon as possible.

9. Although you have an active social media presence, you're opposed to the idea of children being raised in front of screens/developing phone/PlayStation dependencies. (Relatable content because I, too, was raised in a TV-less household). What are the long-term benefits children reap by spending time outside? Be it in a suburban garden, or - in the case of Spencer and Rebecca - Nature, with a capital N.

Kids have plenty of time to grow up before they need to be bogged down by screens and modern devices. As much as modern technology can be useful, it can also be harmful if a healthy balance is not maintained. Children have developing brains which are easily altered and changed based on the stimuli they receive. Phones, PlayStations and other modern devices can enforce an expectation of instant gratification. Nature, on the other hand, teaches patience, creativity, and an ability to observe, question and formulate a conclusion – in short, children are taught to think instead of just reacting.

10. And, finally, how many pups do you think Lazarus has fathered since you last saw him? :)

Hahaha! I’m sure he would be a great dad. After we released Lazzy we spent a lot of time monitoring him to make sure that he adapted well to his new environment. When we were satisfied that his release was a success and that he was adeptly coping in this habitat, Brendan and I made the concerted decision to withdraw our presence and to let him get on with his life. We were careful not to fortify a human dependency. It was hard to let go, but in the end, we knew that it was the right thing to do. We have plans to go back sometime, to place camera traps, and to see what we can find.

An otterly captivating story of dedication and courage

In their new book 'Return to the Wild', conservationists Brendan and Danelle Murray write about their experiences of releasing a captive-raised Cape ...
Books
6 months ago

A group of animal lovers is pulling out all the stops for a pampered Cape clawless otter who doesn’t like water. Or swimming. Or catching fish.
News
2 years ago

Peter Pickford on writing 'To the Edges of the Earth'

To have the opportunity to stand by oneself, without distraction, and drink in how exceptional the Earth is, is a rare privilege.
Books
6 months ago

“When a pandemic arises it puts everything that's wrong with our approach to nature and wildlife conservation to the forefront.”
Books
8 months ago