Books that formed me - Eliot Higgins 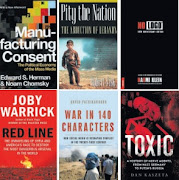 My teenage years were bookended by the first Gulf War, 9/11 and the invasion of Iraq in 2003. Being a British schoolkid, America was always exciting, Disneyland and Hollywood and all that stuff, but by the time I got to my teenage years that had turned into a bit of cynicism and that's when I started reading Noam Chomsky. I read a lot of his books, but Manufacturing Consent (written with Edward S Herman) was a classic. It taught me a lot about how the US behaved, particularly in the 1980s in places like South America and about how the US media was complicit in pushing the line of the US government when it came to those countries. I found that fascinating as a teenager, but even at that time I was frustrated it was so focused on the US. But it opened my mind. No Logo by Naomi Klein was also fascinating because I was interested in labour issues as well as US capitalism and how it operated.

I then started reading more about the conflicts in the Middle East and US involvement. Robert Fisk's Pity the Nation I found fascinating, as was John Pilger's Heroes. Pity the Nation was about the Lebanese civil war and the circumstances around that, and that just helped develop my understanding as a 15-year-old living in the UK.

But later on Fisk became involved with the groups who were pushing conspiracy theories around Douma and stuff like that. I also remember seeing a tweet from Pilger expressing doubt about the Skripal attack when it happened, and it was just so disappointing. And it's sad, because I enjoyed their work early on. But I think the kind of journalistic left, people like Fisk, Pilger, and Seymour Hersh, didn't realise what they got involved with when they got drawn into these new communities of conspiracy theorists.

David Patrikarakos's War in 140 Characters: How Social Media is Reshaping Conflict in the Twenty-First Century was one of the first books that looked at the way social media had an impact on the coverage of conflicts. It's an area I've done a lot of work on, but it starts first with the way Israelis used social media as a kind of battlefield for both spreading information and finding information, and I found that fascinating.

Joby Warrick's Red Line: The Unraveling of Syria and America's Race to Destroy the Most Dangerous Arsenal in the World is about how the chemical weapons were disposed of after the August 21 2013 sarin attack in Syria, and the political debate around that. It has a lot of details about the actual technical process of how they put together the disposal of these weapons, a complicated and dangerous process. There were a lot of political issues because countries didn't want chemical weapons being brought to their countries to be disposed of.

Toxic: A History of Nerve Agents, From Nazi Germany to Putin's Russia by Daniel Kaszeta is a history on chemical weapons and is something I use every time there is a smidgeon of information about chemical weapons in Syria, a single tweet or post or report; everything. This book is extremely useful now as we are moving into more chemical weapon use with Russia poisoning people with Novichok. It is useful, rather darkly, to understand what it is like to be poisoned by a chemical weapon, considering the kind of risks we are taking. What has also made me so paranoid was that when Navalny was first poisoned, they found Novichok in the water bottles which were in his hotel room.