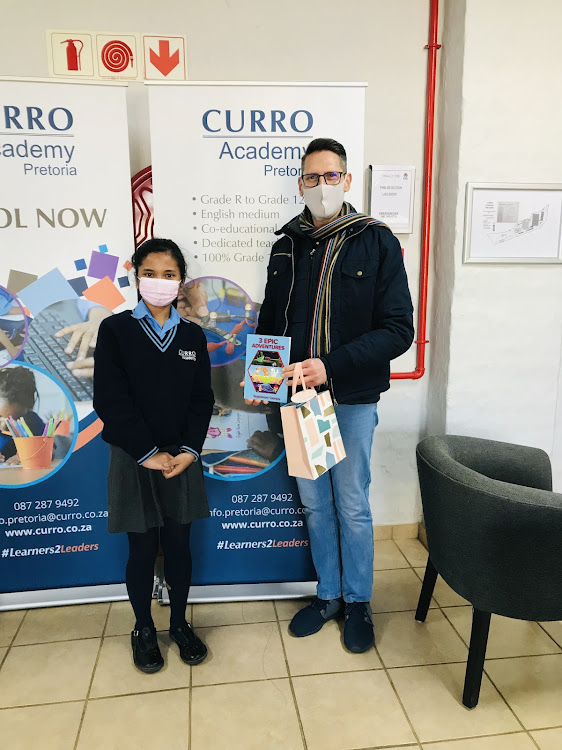 Samhridhy Gohain is no ordinary writer – she is only 10 years old and a pupil at Curro Academy Pretoria. Her first book, 3 Epic Adventures, is now available for purchase on Amazon or in hard copy on request. It is a collection of short stories, including “Jupiter The Space Frog”, “Adventures of Blisa The Kitten” and “Are Aliens Real?”

Beautifully written and creatively executed, Gohain’s debut book combines her love of animals and passion for space. She writes with heart and a voice beyond her years that parents everywhere will enjoy sharing with their children or even reading themselves.

Inspiration for the young author – who started writing at seven - is two-fold: her principal scientist father and her grade three teacher at Curro Academy Pretoria, Mary Brümmer. Both played an integral role in encouraging her to write. Her father, Dr Mukat Gohain, was a keen writer as a child too and has passed his passion on to his daughter, encouraging her creativity and imagination. As her teacher, Brümmer realised Gohain’s potential as a creative writer early on, as she was highly skilled in writing short stories herself. Brümmer’s own love of frogs provided the inspiration for Gohain’s first story, “Jupiter The Space Frog”, this as the classroom was painted lime green and was covered in frogs.

Brümmer says of her time teaching Gohain: “I tried to encourage her to never stop writing, and she didn’t. She is truly an amazing little girl. She has a fantastic sense of picking up the small things that you say and remembering them. For instance, I told her that my mother loved her stories and that her name is Lily and Lily is now part of the “Jupiter the Space Frog” story too.”

Gohain’s love of space also plays a key role in her work. Her parents bought her a telescope early on so that she could watch the stars and planets, which fascinate her. It’s also why Jupiter is no ordinary frog but from space.

Proceeds from the sale of her first book are being donated to Jakaranda Children’s Home in Pretoria, East Lynne.

Sangeeta Gohain, her mother, says: “She is a very kind person and loves to help people and animals. It is why she insisted on donating funds to the children’s home, she wants to make a difference.”

Vivian Venter, Curro Academy Pretoria’s Head of Primary School, says: “We are so proud of Samhridhy and all she has accomplished at such a young age. Her writing is inspiring and her love of animals and space very apparent. She has combined these two passions beautifully in her debut short story collection. She is a bright child who we are delighted to have on campus at Curro Academy Pretoria and we are excited to see her grow as an author.”

Activist pens a story for girls to embrace their Afro crowns

Zulaikha Patel's 'My Coily Crowny Hair' approaches the issue of Afro hair through the eyes of the main character Lisakhanya, a seven-year-old girl.
Books
9 months ago

Free online books, and data-free too

Book Dash﻿'s books are free for anyone to read online, download and adapt as needed.
Books
6 months ago

Meet the winners of the ‘My Father’ writing competition

What does the word “father” mean to you? That’s what the FunDza Literacy Trust asked young writers across the country for their latest essay ...
Books
5 months ago