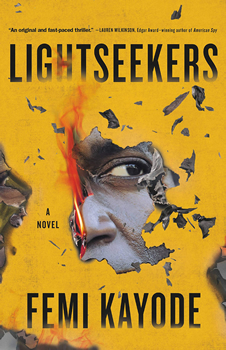 Nigeria has produced some excellent new mystery and thriller writers in recent years, and Femi Kayode is no exception. His debut novel, Lightseekers, could be described as a psychological thriller, but it’s completely different from the type of book that comes to mind in that sort of pigeonhole. This is a special book, and reviewers agree. It was selected as a best crime novel of the month by The Times, Sunday Times, Independent, Guardian, Observer, Financial Times, and Irish Times. Few debut authors get that sort of recognition.

Kayode trained as a clinical psychologist in Nigeria before starting a career in advertising. He has created and written several prime-time TV shows. He recently graduated with distinction from the UEA Creative Writing programme and is now a PhD candidate at Bath Spa University. Kayode won the UEA/Little, Brown Award for Lightseekers when he was still writing the novel. He lives in Windhoek, Namibia, with his wife and two sons.

In this interview for The Big Thrill, Kayode shares more about his startling debut, and how fact and fiction sometimes intertwine.

Would you tell us a bit about yourself and what brought you to write Lightseekers?

It’s really hard to cram 50 years into “a bit”, but I’ll try. I grew up in Lagos, Nigeria, and hold a postgraduate degree in clinical psychology. I have worked in advertising since I decided not to practise psychology. I’ve written several stage plays and worked in film and radio. I live in Namibia with my family. Sometime in my mid-forties, I think I had a midlife crisis. I suddenly looked at my life and felt I had not done anything of meaning or impact. It’s like that movie, It’s a Wonderful Life, except this time there was no angel coming to show me all these great and amazing things I had done. While I was proud of my professional life in advertising, I still felt this need to have something of mine that I could be proud of, that hopefully lives long after me. I went back to school at the University of East Anglia, and that was where I wrote Lightseekers as part of my thesis.

The premise in Lightseekers is that three students are beaten and set on fire by a mob angry about the gangsterism they associate with the nearby Okriki University. It was motivated by the real murder of four young men near Port Harcourt. How similar is the situation in your novel to the real case?

Like all works of fiction, Lightseekers was inspired by that all-powerful “what if…?” The actual tragedy was one that shook me and many people who saw the videos on social media. In fact, initially, I had wanted to write a nonfiction book based on the real murder of the four young men. The logistics and the moral implications of profiting off the miseries of multiple families and a community made me think twice about that route. And I think that got me thinking about the “what if” aspects of the tragedy. What if it was not a straightforward mob action like everyone thought? What if it was a targeted assassination of one of the boys? What if it was the perfect storm of sorts — a combination of opportunity and the existing systemic conditions that made it all possible? What if ...

I think as soon as I went in that direction, the answers I was coming up with took the story in a whole different direction. In the end, I can say that while the story was inspired by my need to make sense of the real tragedy of what Nigerians refer to as Aluu 4, it ended up being a complete work of fiction with little or no bearing on the facts of the story that inspired it. In fact, writing it became a sort of exorcism for me. I was finding it really hard to reconcile my country with this barbaric act. Crazy as it sounds, for some of us in diaspora, we want to hold on to an idealised version of Nigeria — one where everything can be fixed by good governance. We rarely blame the citizenry for the problems, so this tragedy was a wake-up call for me. It was not police brutality or some mayhem caused by bad governance or corruption. This was people being evil to other people. Not an isolated villain but a whole community. I think that set me on a journey of self-reflection about my origins, my place in the world, and what kind of stories I wanted to tell.

Certainly, mob violence can happen anywhere in the world and in any culture, but Lightseekers couldn’t be set anywhere else. The powerful tribal hierarchies, the university fraternities/cults/gangs, and the resulting relationship with the townspeople in the area, the mixture of religions, the heat, the food, the traffic, all give a powerful sense of place. Was one aim of the book to reveal aspects of modern, rural Nigeria?

I’m not sure it was one of the aims as much as the aim. I really was tired of these expectations of the kinds of novels that should come out of the continent. I love the opportunity crime fiction gives to travel across different classes, through different lenses. Crime affects everyone, no matter your ethnic group, race, gender, or age. Few literary genres offer that kind of opportunity to let the reader transverse through a community or a group of people. I think of that seminal novel, Sacred Games by Vikram Chandra. My aim was to achieve that level of complexity about Nigeria, but I didn’t think I was smart enough (like Chandra) to take on the whole country, so I settled for a fictional town that I could manage.

So yes, I wanted the reader to see a bit of Nigeria that’s not quite prime time viewing on CNN. I wanted the reader to know that people, real people, with real experiences live in these places, and their stories are important. But most of all, that the reasons why people do heinous things are not as alien as many would like to believe. There’s no “us and those people”. Especially in this age of social media, we are all connected, and the triggers of trauma can be quite similar.

I had to explain “noir” to the writers - stories that are dark, and look at the disruption and the decaying aspects of society.
Books
1 year ago