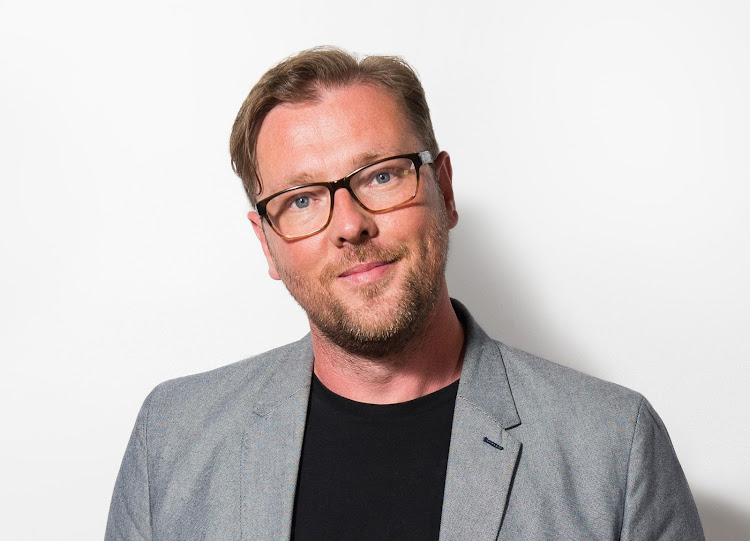 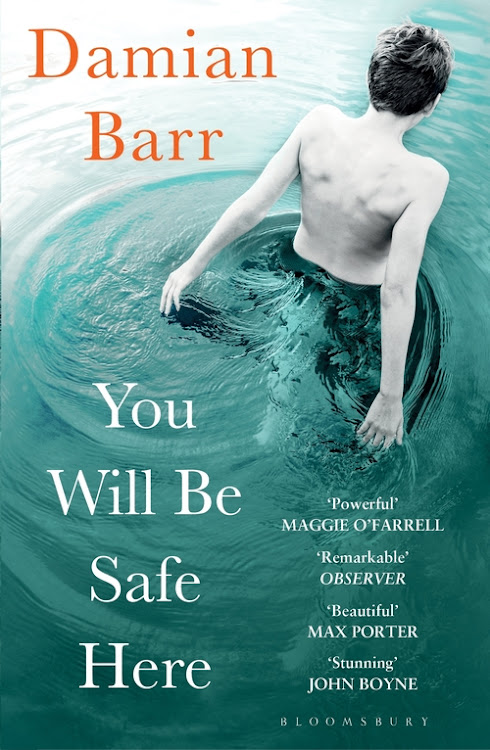 “It was really hard to read that story about what happened to Raymond. How he had almost 60 different injuries, how he was electrocuted. That it was so horrific that he tried to kill himself just to get away from it all.”

Scottish author Damian Barr is referring to a 2013 article published in The Telegraph about the murder of Raymond Buys, a 15-year-old boy from Boksburg who succumbed to the torture he was subjected to at the “training camp” Echo Wild Game Rangers which claimed to “make men out of boys”.

Buys’ murder inspired the story of Willem Brandt, the protagonist of Barr’s debut novel, You Will Be Safe Here, and the topic of conversation during our telephonic interview.

The picture of Raymond resembled a primary school friend of Barr’s from SA.

“I wanted to know more about him as a boy.”

Like Raymond, Willem — raised by his mum Irma and stepfather Jan (“who he’ll never call Pa”) in suburban Brakpan — is bullied and ostracised by his peers and Jan.

Expelled from the prestigious Benoni Park Academy for attacking his main tormentor in a fit of rage, this results in Jan’s decision to send him to Camp New Dawn, which ominously echoes to “make men out of boys”.

Barr says he never considered writing a novel about Buys’ murder yet did pen a feature on the horrific happenings at the camp — and the resurfacing of white paramilitary groups — for The Guardian in March 2019. This undertaking led him to the discovery of Bloemfontein’s concentration camps.

I hadn’t thought this boy in a newspaper would lead me to come to SA, and would ultimately lead me going back to 1900, and discovering the context of contemporary camps

Damian Barr, author of You Will Be Safe Here

“I hadn’t thought this boy in a newspaper would lead me to come to SA, and would ultimately lead me going back to 1900 and discovering the context of contemporary camps. I didn’t start out thinking ‘Oh, I have this grand history I’m going to cover’. It was just a picture of a boy and I felt for him.”

Of his decision to employ a first-person narration to bring Sarah to life via diary entries, Barr says he “wanted the reader to experience it as Sarah experiences it. I want to use the diary to exist as an object so it can be used later on in the book”.

Barr draws on his memoir Maggie & Me, which recounts the experience of growing up gay in Margaret Thatcher-era UK.

“I wrote my memoir in the first person and in the present tense because I wanted you to experience growing up with me, the trauma I had in my family and in my community, and that brought it to life for me.”

On whether he had a prior affinity with SA or an interest in the war, Barr responds that he wasn’t taught about the history of the empire as it is taught in the UK: a “history of triumph. Of how wonderful, safe and good the world was.

“We weren't taught very much about the Boer War at all, certainly not about the concentration camps. For me that was a process of discovery, which was enraging and horrifying. Embarrassing, actually, more than anything else,” he candidly adds as an afterthought.

Barr, who was in school during the height of apartheid, describes apartheid as “the first kind of form of foreign political engagement I had”, conceding “it gave me a very skewed view of what SA is, of who Afrikaners are, of what it means to be black.

“As part of writing the novel, I had to challenge all my own attitudes, and my own perspectives.”

Barr says he wanted to tell a story that joined the horrors of the present with the past, which is why “we have that kind of sweep in the novel”.

As part of writing the novel, I had to challenge my own attitudes and perspectives

The words of the title are mentioned twice in the novel, the first when Sarah and her young son arrive at the Bloemfontein concentration camp. A captain welcomes them by stating: “You are not prisoners here, you are refugees. Please be assured, you will be safe here”.

The second time is when Jan assures an anxious Irma that nothing will happen to Willem at New Dawn: “It’s lekker. He’ll be safe there.”

A less overt mention of this perceived “safety” is when Willem arrives at New Dawn. A fellow teenage boy and inmate of the camp collects Willem at the gate: “Willem hears a walkie-talkie crackling asking ‘Veilig?’ Willem replies: ‘Veilig.’”

I ask Barr about the deceptive nature of this statement.

“I feel that when you have to tell people they will be safe,” he responds, “you may believe that, but they are not going to be safe. It’s the completely opposite direction. It’s an irony, a cruel irony.

“But I think some of the soldiers genuinely believed in the camps. That the people will be safe.

“Using that title was a way for me of uniting the past and the present, something that will forever be told to people who are in danger and it’s a lie, whether it’s conscious or not,” Barr emphasises.

Willem’s absent, layabout dad Rick is the first person to overtly call him a moffie when he witnesses Willem dancing and singing along to Britney Spears’s 1999 hit Baby One More Time:

“Rick appears. Willem wraps his arms around his legs but Rick shakes him off shouting, ‘Moffie!’  ‘A moffie!’ Rick cries. ‘A fuckin’ moffie!’”

What impact does Rick calling him a moffie have on Willem?

“What it does,” Barr starts, “is that it affirms the fears he has had about himself. He knows he doesn’t fit, he knows he has a hard time at school. Being called that is really shocking to him. Though his father is absent, he loves his father, and he wants his father’s approval.

“He doesn’t understand the meaning of what his father said. He understands from the tone how angry and how hateful it might be, that name. He’s still questioning who he is as the novel goes on.

“When you’re young and queer, you don’t know who you are. We often find out who we are from other people’s fears and phobias. He’s not that confident about his identity.”

“The culture operates on that macho, narrow, toxic masculinity that exists here in SA and around the world in many different ways. It’s quite strong here and that’s why they’re trying to force Willem away from his books, away from [his beloved pug] Britney.”

I tell Barr how much I enjoyed Die Taal being interspersed with English — including “ja”, “mevrou”, “lekker”, “gekekkel”, and “spogmotor”, all sans translations — and ask him if he considered including a glossary.

“I didn’t want to use Afrikaans words to replace English words. “Kekkel” is a really good onomatopoeic word. I think you get it. I don’t think you need a glossary. If I’d done my job correctly, you wouldn’t need a glossary because the context should tell you what the word means, like rooinek or whatever.”

In general, not speaking Afrikaans is being a traitor

Barr wanted to use more Afrikaans words because he “really enjoyed getting to get to Afrikaans as a language. I think the taal is very...” He hesitates. “I think people in the UK have the wrong idea. They hear it and think ‘it’s the voice of the oppressor’, ‘oh, apartheid’.

“I find it very melodic.

“Of course, there’s a whole thing that happens in the contemporary part of the novel where Willem doesn’t want to read in Afrikaans or speak Afrikaans. He wants to be cool; he wants to speak English. He wants to read Harry Potter in English, he wants to some day go to America or England. That’s what teenagers want. They want to be cool.”

Willem’s relationship with English is conflicted because he’s reprimanded at home for not speaking it, yet actively punished and ridiculed at New Dawn when he dares utter it.

The only boy Willem befriends at New Dawn is Victor Geldenhuys, fellow bibliophile, similarly ostracised, and reluctant speaker of Afrikaans.

Before meeting Geldenhuys, the first person Willem instantly relates to is Harry, who he meets in the school library as he’s rereading Harry Potter and the Philosopher’s Stone. Harry notices the book, proclaiming it “cool” because it’s English.

Barr describes their conversations as “charged with the energy of a thousand photon torpedoes”.

“I think that with Harry, Willem can’t believe somebody who looks cool is interested in being friends with him,” Barr explains.

What it becomes is them against the world

Their friendship — and camaraderie — aside, one also notices Victor regards Willem as more than just a friend.

“It becomes more,” Barr acknowledges. “What it becomes is them against all the other boys in the camp. Them against the world. There’s definitely more to it.”

Barr refers to a passage in the novel where Victor keeps the curls from Willem’s hair when his hair is shorn off as he arrives at the camp: “For him there was always more to it.”

Barr references a section of the novel where Willem “commits acts of violence so shocking to be able to save Victor. We realise — in that violent, awful place — that the thirst for horror these people have is never going to be satisfied.”

Barr includes an epilogue, with the concluding paragraph reading: “Camps like New Dawn still operate across SA. They are for white boys only and run by former soldiers like the General who believe that one day white South Africans will rise again and finally right the historic wrongs of the Boer Wars. Parents pay to send their sons to these places hoping they will drill in the toughness and discipline formerly instilled by the National Party (which ended in 1993). They want their sons to be able to survive in an increasingly violent society. Boys like Willem and Geldenhuys and Volker, who aren’t ‘man enough’ or who simply fall through the cracks.”

What other “message” would Barr want the reader to respond to after reading the final sentence?

“What it taught me,” he finally says, “is that it’s necessary and important to witness, to be a witness, to be a testimony to suffering and darkness and cruelty. And also in looking at that darkness that there’s always light, that there's always hope.

“We can’t turn away from it. In the world now or the world in history then. Hate grows in darkness, and we have to look it straight in the eye and confront our past so we can understand our present so we can change our future.

“I think that’s what it is for me. It was a really painful book at the time to research and to write and I knew. I’ve heard from thousands of readers that ‘this book broke my heart’, and ‘thank you’ and, for me, I didn’t have to write this book and I didn’t have to go to those places but I felt to compelled to do it because I had to kind of be a witness.

“This novel shows them both.”

Wading into a murky colonial past and present-day darkness

'You Will Be Safe Here' shows how the sins of the past haunt the present - and may explode in the future, writes Jessica Levitt
Books
2 years ago

Alex de Koker has received a longer sentence than the required minimum for the murder of his teenage charge in order to teach child abusers a ...
News
6 years ago

Military-style training camp commander Alex de Koker was on Thursday sentenced to an effective 25 years in prison for murdering his 15-year-old ...
News
6 years ago