Michael Sears in conversation with Stanley Trollip about ‘Wolfman’ 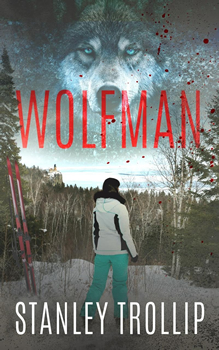 Full disclosure: Stanley Trollip and I write the Detective Kubu mysteries together. So I know he’s an excellent writer with clever plot ideas, but even I was surprised by the intriguing premise, suspense, and twisty plot of his first “solo” mystery, Wolfman, set in Duluth.

If you think I may be biased, here’s what Julie Kramer, author of the Riley Spartz series and national award-winning investigative producer, said: “Wolfman is a howling good read. Stanley Trollip delivers a suspenseful nature vs news thriller that will have readers fearing and cheering the big bad wolf.”

Trollip was born in Johannesburg and now splits his time between Cape Town and Minneapolis. In this interview for The Big Thrill, he talks more about writing “solo” and the inspiration behind his thrilling new release.

Crystal Nguyen is an intriguing protagonist. She’s driven in her career and her sport, and she’s passionate about the environment. As an American born in Vietnam, she remains an outsider. Where did she come from?

After our fourth Detective Kubu novel, we were concerned about getting stale and decided it was time for a change. We decided to write a thriller instead of a police procedural and set it in SA instead of Botswana. Since rhino poaching is a huge issue in SA, we realised it would provide a good back story. At the time, about 1,000 rhinos were being slaughtered every year for their horns, each of which could have a street value of up to nearly $500,000 (about R7.4m). You can imagine what people are willing to do when that amount of money is at stake.

We also wanted to give ourselves a serious writing challenge so we set about trying to decide who should be the protagonist of the new book. After much discussion we decided it should be an investigative reporter who could be looking to do a story about rhino poaching. I then suggested it should be a woman since our other protagonist, Kubu, is a man.

Once we agreed on that, I suggested a Vietnamese woman who was a refugee after the war and living in Minnesota. I opted for a Vietnamese woman because Vietnam is at the centre of the rhino horn trade, and it would be useful for the story to have someone who could go there, be relatively inconspicuous and speak the language. I suggested Minnesota since I had already lived in Minneapolis for 30 years.

Mila de Villiers speaks to Wole Soyinka about his latest book and why it took him 50 years to write a new novel.
Books
3 weeks ago

We had serious problems with the book, running into a wall a few times at about 20,000 words. Each time that happened we took a breather and wrote another Kubu mystery.

Eventually I suggested to Michael [Sears] that our problem was that we didn’t really understand our new main character, Crystal Nguyen. I offered to write a few stories about her, set in northern Minnesota where she worked as an investigative reporter for a Duluth TV station. Those few stories ended up being about 60,000 words, and that solved our problem. We returned to the thriller and finished it successfully. It was published in the UK first as Dead of Night and in the US as Shoot the Bastards.

When Covid-19 appeared and I was severely locked down in Cape Town, I realised I had an unpublished novel sitting on my hard drive — at least the first draft of one. So I set to work, rewriting it, tightening it and refining the overall story.

In essence, Wolfman, which is what I called my novel, is a prequel to Shoot the Bastards.

Employed to report on environmental issues for a TV station in Duluth, Minnesota, Crys finds herself doing the typical cub reporter job. Her break comes with the trial of two wolf poachers and a fiery report she presents on air. After that her relationship with her boss, Scott Hansen, goes up and down with the ratings and the threats from angry hunters. Does this ignite the tension for the rest of the story?

Crys’ relationship with Hansen is always tense. In fact, the book starts with her rehearsing what she will tell him when she hands in her resignation letter. Before she can do that, two hunters are found not guilty of wolf poaching despite the fact they have many wolf pelts in their possession.

Hansen is incensed that they got off and gives Crys the opportunity to report on it in prime time, with the admonition not to mention hunters. She doesn’t use the word, but calls them barbarians instead, which ignites a heated debate in the community, which is her goal, and draws anger from her boss.

She keeps putting him in difficult positions when she pushes his boundaries, sometimes going against his orders. However, her reports cause the station’s ratings to soar. Without the ratings, he would have fired her.

When it becomes apparent her life may be in danger, first from poachers she goes after, then from a so-called ally of hers who doesn’t think she’s doing enough, her boss becomes very protective. Of course she wonders whether he’s trying to protect her or the ratings.

Crys has a particular passion for wolves and is tempted to become involved with movements like Hunt the Hunter, which targets hunting. Is it based on a real group?

When I first read this question, I knew how I would answer it. However, with a little research, the answer is not as clear. A few years ago, perhaps even within the last year, there was a Facebook group for Hunt the Hunter. It no longer exists. I suspect it was taken down because it advocated, at least in the title, violence against hunters. If my memory serves me correctly, there were photos of trophy hunters standing over the animals they had killed.

To answer your question, yes, I believe there is such a group, but its public face seems to be in hiding.

Femi Kayode's debut novel, Lightseekers, could be described as a psychological thriller, but it’s completely different from the type of book that ...
Books
1 month ago

Mike Nicol is a talented South African novelist and stylist, and every one of his thrillers is a treat.
Books
4 months ago