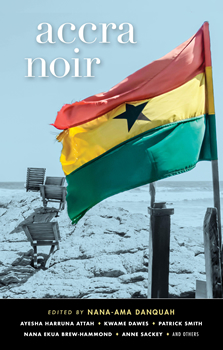 The stories in 'Accra Noir' cover rape to murder, from the intimacy of the bedroom to the hustle and bustle of streets and alleyways of the city.
Image: Supplied

Nana-Ama Danquah is an author, editor, freelance journalist, ghostwriter, public speaker, actress and teacher. Her groundbreaking memoir, Willow Weep for Me: A Black Woman’s Journey Through Depression (WW Norton & Co), was hailed by The Washington Post as “a vividly textured flower of a memoir, one of the finest to come along in years”.

A native of Ghana, Danquah is the editor of four anthologies: Becoming American: Personal Essays by First Generation Immigrant Women (Hyperion); Shaking the Tree: New Fiction and Memoir by Black Women (WW Norton & Co); The Black Body (Seven Stories Press); and, the most recent, Accra Noir (Akashic), as part of their popular noir series. She lives in Southern California.

In this interview with The Big Thrill, Danquah talks about the new anthology and her thoughts about why African writing seems to be making its mark on the global literary stage.

African writing was in the spotlight last year with the announcement of Tanzanian-born novelist Abdulrazak Gurnah as the 2021 Nobel laureate for literature, and South African Damon Galgut winning the Booker Prize. Would you agree that African literature continues to draw attention globally?

Every year, decade and era has had its fair share of African writers who have reached great heights, insofar as the world of awards is concerned, with their work. Chimamanda Ngozi Adichie has been in the spotlight winning awards. Teju Cole as well, and Helen Oyeyemi. If we want to reach further back, there has been Ben Okri, Wole Soyinka, Ama Ata Aidoo, Nadine Gordimer, JM Coetzee, Ngugi wa Thiong’o. I could go on. The African continent has continuously produced top-notch writers who have enjoyed acclaim in one form or another throughout the entire world.

The history of accolades shows the weight and importance of African writing. You write in the introduction that Ghana became the first sub-Saharan, or ‘black’, nation to gain independence from colonialism in 1957. How did independence influence the writing from Africa?

I believe the creation of art — be it literature or visual art — has always been prominent in Africa. The access to outlets willing to publish what was being written was clearly limited during colonialism. That is why there was an explosion of African literature during the period of time when those African countries, one after the other, were winning their independence. Heinemann, for instance, began its African Writers Series imprint, and that made African writing accessible to the rest of the world.

How did colonialism influence the development of Ghana, and what are the remnants in Accra?

People have written entire books about the effects of colonialism on nations so I think it unwise to tackle any sort of direct answer to that. I do believe the contributors to Accra Noir, in their stories, do a wonderful job of describing the remnants of that colonialism — in the architecture, the street names, the names of certain neighbourhoods, the English names of characters and so on. The streets in Accra honour not only its own independence and the events that led up to it, but also the architects of independence in other nations throughout the world.

You write in your introduction that “Accra is a city that stands at the centre of the world”, as a meeting point of East and West, a cultural crossroads. For those who have not visited Accra, how would you describe it in terms of being a microcosm of Ghana?

In most developing nations people are drawn to the capital city because of educational and economic possibilities. Citizens flock to any large metropolis in search of better employment opportunities and because they want to live in “the big city”. Ghana is no different. There are more opportunities available in Accra than in the villages. So people come to Accra from all over the country, bringing with them their foods, languages, cultural and religious beliefs. In this way Accra is a microcosm of Ghana. It is a mini-Ghana.

To talk more of crime, west African cities are said to be some of the most unsafe in the world in the 21st century. The stories in Accra Noir cover rape to murder, from the intimacy of the bedroom to the hustle and bustle of streets and alleyways of the city. Rough justice can easily play out, as you say, “in the shadow of the supreme court and parliament buildings”, showing us the paradox of order and chaos. This paradox seems typical — poverty and desperation juxtaposed against wealth and the establishment. Is this chasm between rich and poor, tradition and modernity, a root cause of crime there?

I don’t believe crime has a single root cause. Some people commit crimes out of desperation, some people out of curiosity, some out of boredom and for other reasons. That is the beauty of the stories in Accra Noir: they explore the motivations for the crimes committed. Those motivations range from poverty to jealousy to insecurity, to power, and on and on.

Crime has always, to some extent, existed in all societies in the world. That said, I do believe income inequality, as we are seeing even in many developed nations as well, does serve as something of a prelude to crime as well as to revolution. I think part of the reason the chasm to which you refer even exists is that many societies exist in binaries, so it can often be challenging to find a middle ground, especially when the distance between two realities grows too wide.

Getting to the writing, you say in the introduction that Accra is “a city of storytellers”. The people of Ghana “live and love in parables and aphorisms and proverbs”.  Apart from the crime aspect — corrupt cops, crooked politicians, thwarted lovers, disillusioned citizens in despair, all represented — I loved the language of the book, the turns of phrase, the cultural references that come through.

I labelled Accra a city of storytellers because everything one encounters is an invitation to a story — there are aphorisms, symbols, street names everywhere that are all stories waiting to be told.  There is a story even in an individual’s name, because we have names that can indicate whether someone is the first or second of a twin birth, names that indicate whether someone is the single birth that followed a twin birth. Children are not formally named until the eighth day after birth, so our “day names” correspond with the days of the week. Kofi, for instance, is a baby boy born on Friday. Ama is a baby girl born on Saturday.  Thus, one might assume, since my name is Nana-Ama, I was born on Saturday, but I was born on Wednesday and would ordinarily be given the day name Akua, had I not been named after an elder whose day name was Ama, hence the name Nana preceding Ama.

Everyone in Accra has a story to tell, a story prompted by their name or facial tribal mark, or cloth they are wearing, or the symbols on that cloth, or on their jewellery or home décor. This shows up beautifully in many of the stories.

Bryony Rheam’s new book, 'All Come to Dust,' was chosen as one of 10 top African thrillers in 'Publishers Weekly'.
Books
5 months ago

JENNIFER PLATT | After some odd choices, this year’s Nobel winner is deserving

Femi Kayode's debut novel, Lightseekers, could be described as a psychological thriller, but it’s completely different from the type of book that ...
Books
8 months ago

Recently released in the US, Sifiso Mzobe's 2010 thriller 'Young Blood' tells the story of a youth with nothing to lose who drops out of high school ...
Books
1 year ago