Many believe he was a great healer and worker of mighty magic. Others wonder if his empire was based on outrageous fabrication and cunning manipulation of human needs and weaknesses...

The Extraordinary Career of a Millionaire Medicine Man

The millionaire medicine man Khotso Sethuntsa was born in Lesotho in 1898, and lived and worked in Kokstad and the Transkei until his death in 1972. 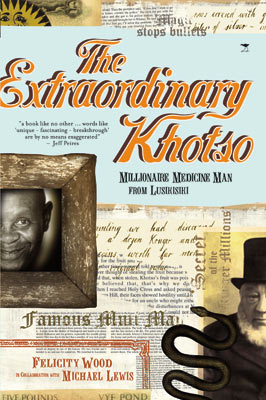 He lives on as a near-legendary South African figure.

Khotso, as he is commonly known, built distinctive blue and white houses, adorned with pillars, minarets, stained glass and statues of lions. He lived surrounded by white-robed disciples and retainers, and numerous wives and concubines.

Customers from all over southern Africa and abroad flocked to him for medicines for healing, good fortune and wealth.

An illiterate man from poverty-stricken rural origins, Khotso became a black millionaire at the height of apartheid. He delighted in flaunting his wealth.

Every year he purchased a new Cadillac at the Kokstad Agricultural Show, paid for in cash, because he preferred not to use banks. He and his attendants would arrive bearing suitcases full of banknotes, and slowly count out the money.

Khotso claimed his parents had worked for Paul Kruger, hinting that his fortune derived from the long-lost Kruger millions. Statues of Kruger and Kruger memorabilia still adorn Khotso’s headquarters in Lusikisiki.

He maintained that Paul Kruger offered him guidance in both spiritual and financial matters. Khotso predicted the winner of the Durban July three times in a row. On the first occasion, he said Kruger had shown him the name of the winning horse in a vision.

Modern Afrikaner leaders, including J.G. Strijdom and H.F. Verwoerd, visited Khotso – for his medicines for political power, it was said. Verwoerd visited him just before the 1948 elections and many believed the Nationalists swept to victory because they had Khotso’s medicine.

Khotso’s fame began when he was a youthful farmworker. The Kokstad farmer for whom he worked punished him, dismissing him from his employment.

Shortly thereafter, a tornado struck the farmer’s land, sweeping right through the centre of his house. It was rumoured that Khotso had brought the tornado down on the farm. The conviction grew that Khotso could work strong magic, and his business as a herbalist prospered.

Khotso was renowned for his medicines for prosperity and good fortune, including ukuthwala, a dangerous, powerful procedure for long-term wealth. Many who underwent ukuthwala did indeed become rich.

One of Khotso’s best-selling medicines was ibangalala, a herb for sexual potency. Khotso told people that he had twenty-three wives, claiming he kept all his women sexually satisfied because he used ibangalala.

Khotso veiled himself in secrets and riddles, and has been surrounded by controversy.

While some view him as a sinister master of occult forces, one of his wives described him as “a lively, joking medicine man who loved money, sex and laughter”.

It is only now, thirty-five years after his death, that his biography has been produced, as The Extraordinary Khotso: Millionaire Medicine Man from Lusikisiki and one of the most extraordinary of South Africa’s life histories has been told in full.

My personal discovery of one of the most fascinating South African stories, in which magic, money, sex and politics are intermingled, began quite by chance, with a river monster.

Years ago, I heard that a monster had been sighted in a river near Mount Ayliff in the Transkei. Someone told me various local people believed the creature had belonged to Khotso, and had been running wild since his death. She was amazed to hear that I didn’t know who Khotso was.

She asked if I had ever seen the big blue and white houses in the Transkei, with the statues of lions at their gates. They had all belonged to the millionaire inyanga, or medicine man, Khotso Sethuntsa.

He had been a worker of strong, even dangerous magic. During my journeys through the Transkei, I’d always wondered about these strange, baroque places and felt that there had to be a story behind them. I began to discover what a story it was.

I went to Kokstad, where Khotso had lived for many years. There I began to hear stories of his family connection with Paul Kruger, and the rumours that his fortune was connected to the Kruger millions.

I met people who had seen Khotso buying cars with his suitcases full of banknotes at the Kokstad Agricultural Show.

Many locals still talked about the famous tornado that had, as the Kokstad Advertiser put it, “set Khotso on the road to success”.

I was shown Khotso’s Kokstad house, a weird white rambling mansion beside the Mzintlava river. Some said serpentine forms had been glimpsed in the pools where Khotso’s supernatural wealth-giving snakes were believed to lurk.

I will never forget standing outside Khotso’s house, and feeling the shivers running down my spine. This was an astonishing South African story that I was starting to hear – and a story that had to be told.

So, determined to find out more, I attended the annual Kruger Day celebration in Khotso’s headquarters in Lusikisiki: a tradition Khotso began, which his family and followers continue.

At first I wondered why no-one had ever told the story of Khotso’s life.

Then I began to realise that many people had felt that because the man had been such a secretive, mysterious person, no-one would be able to uncover his life story. Also, many who believed that Khotso had been a worker of strong magic remained in fear of him, even after his death.

To this day, there are people who are afraid to talk about Khotso.

At this point, I encountered Mike Lewis, who had gathered much information about Khotso. He had conducted interviews with key people, some of whom were already dead. Above all, there were interviews with two of Khotso’s principal wives.

Mike had been given various important documents too, including a copy of the handwritten will Khotso dictated to his nephew on his deathbed, in which he left his entire fortune to one member of his household.

This had cataclysmic results after Khotso’s death.

We decided to collaborate on a book. Mike shared his research findings with me and I took on the writing of the book, continuing to investigate Khotso’s life.

There were two principal mysteries: where Khotso’s wealth had come from; and if he truly possessed the supernatural powers many maintained he did.

Although I sometimes felt staggered by the enormity of what I’d taken on, I believed that Mike and I were involved in a process of recovery – bringing one of South Africa’s most hidden histories to light before it slipped away into forgetfulness. For four years I immersed myself in Khotso’s world, becoming swept up in his extraordinary story as I wrote the book.

Khotso’s life was full of sudden, unexpected twists and turns, yet his career followed an almost classic trajectory.

He rose from poverty and obscurity to wealth and power, and then at the very height of his glory, his fortunes began to decline, betrayals, loss and suffering marking his path down towards his death.

And what a central character I had: colourful, larger than life, a man of light and shade, full of exceptional paradoxes and contradictions.

I was aware that I was a somewhat presumptuous outsider, a white woman seeking to tell the story of a black South African inyanga. Yet I knew that while I was the writer, I was not the only narrator.

Information about Khotso’s life came primarily in the form of oral accounts from people who had known him. So I often needed to withdraw into the background, letting these individuals take centre stage so that their voices could be clearly heard.

I knew that if I tried to impose my authorial voice and particular world views on theirs, the book would lose much of its life.

There was, too, the role played by my Transkei research assistant, Sylvia Tloti, who guided me through the world that Khotso had inhabited.

She also carried out liaison work with people and communities; and a number of the central characters and places in the book would not be there if it had not been for Sylvia, who helped me make my way to them.

She led me through the Pondoland hills from one trading store to another, until we found the man Khotso had called his prime minister, James Lunika, who had much to tell.

Also, Sylvia and I ventured deep into the Lesotho mountain villages, where we kept asking people until we found someone who could tell us where Khotso had been born – the village of Ha Ramokakatlela, a place so remote and deep in the mountains that no roads lead there. Later, I walked over the mountains to Ha Ramokakatlela with Mike.

All in all, producing a book of this nature makes a dramatic story in itself. But nothing I could describe would match the high drama of Khotso’s life, and his story has been told at last.

All text by Felicity Wood. These articles first appeared in the Mail & Guardian.