Thando Manana was the third black African player to don a Springbok jersey after unification in 1992, when he made his debut in 2000 in a tour game against Argentina A.

His route to the top of the game was unpredictable and unusual. From his humble beginnings in the township of New Brighton, Port Elizabeth, Thando grew to become one of the grittiest loose-forwards of South African rugby, despite only starting the game at the age of 16. 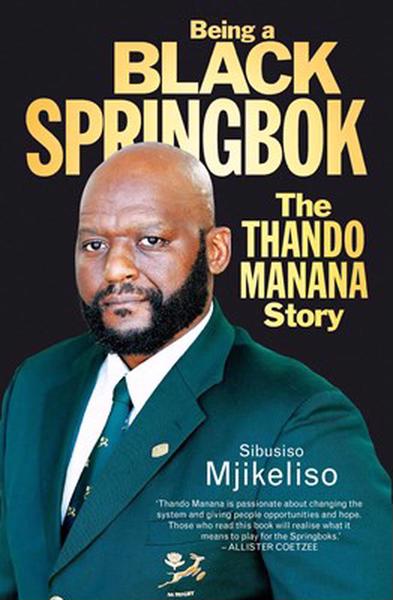 His rise through rugby ranks, while earning a reputation as a tough-tackling lock and later open side flanker, was astonishingly rapid, especially for a player of colour at the time.

Within two years of picking up a rugby ball, he represented Eastern Province at Craven Week, and by 2000 he was a Springbok.

But it isn’t solely Thando’s rugby journey that makes Being a Black Springbok a remarkable sports biography.

It’s learning how he has negotiated life’s perils and pitfalls, which threatened to derail both his sporting ambitions and the course of his life.

He had to negotiate an unlikely, but fateful, kinship with a known Port Elizabeth drug-lord, who took Thando under his wing when he was a young, gullible up-and-comer at Spring Rose.

Rejected by his father early in his life, Thando had to deal with a sense of abandonment and a missing protective figure and find, along the way, people to lean on.

Thando tells his story with the refreshing candour he has become synonymous with as a rugby commentator, pundit and member of the infamous Room Dividers team on Metro FM.

He has arguably become rugby’s strongest advocate for the advancement of black people’s interests in the sport, and his personal journey reveals why.

As the editor of Kick Off magazine, Sibusiso Mjikeliso is one of the youngest editors of a national, monthly publication in South Africa. He has written on rugby, cricket, football and tennis for the Sunday Times,The Times, Daily Dispatch and Sowetan. He has also worked as the senior sports writer for Business Day. Mjikeliso spent time as an exchange reporter at the Sunday Mirror in London, where he wrote on Wimbledon tennis, English Premiership rugby as well as English Premier League football. His versatility as a writer and knowledge of different sporting codes has made him one of the most influential sports writers in South Africa. This is his first book.