The Steinhoff crash wiped more than R200bn off the Johannesburg Stock Exchange, erased more than half the wealth of tycoon Christo Wiese and knocked the pension funds of millions of ordinary South Africans. 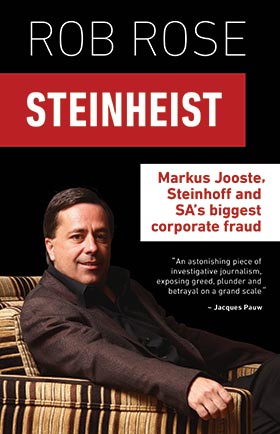 When this investors’ darling was exposed as a house of cards, tales of fraudulent accounting, a lavish lifestyle involving multimillion-rand racehorses and ructions in the ‘Stellenbosch mafia’ made headlines around the world.

As regulators tally up the cost, Financial Mail editor Rob Rose reveals the real inside story behind Steinhoff. Based on dozens of interviews with key players in South Africa, the UK, Germany and the Netherlands – and documents not yet public – Steinheist reveals:

• How Bruno Steinhoff formed the company by doing business in the Communist bloc and apartheid South Africa;

• How the ‘Markus myth’ started in the dusty streets of Ga-Rankuwa and grew thanks to a ‘bit of luck’ in a 1998 takeover;

• How Jooste insiders shifted nasty liabilities off Steinhoff’s balance sheet to secretive companies overseas in order to present a false picture of the profits;

• How Wiese was lucky to lose only R59bn and how Shoprite narrowly escaped getting caught in Steinhoff’s web; and

• What happened behind closed boardroom doors in the frantic week before Jooste resigned.

‘The driving narrative is vintage Rose. That’s because he knows what he’s talking about. Markus Jooste will absolutely hate this book.’ Peter Bruce

‘Reads like a fast-paced manuscript to the movie which must be made.’ Bruce Whitfield

Award-winning journalist Rob Rose is editor of the Financial Mail. He has worked for Business Dayand at the Sunday Times as an investigative journalist and as Business Times' editor. His first book was The Grand Scam: How Barry Tannenbaum Conned South Africa’s Business Elite.