Kora: a thorough account of a lost Khoisan language

The Kora language was believed to have disappeared. Then an academic managed to obtain recordings from two of the last living speakers 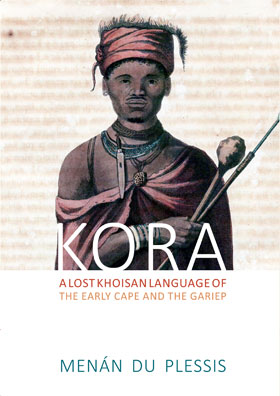 Kora: A Lost Khoisan Language of the Early Cape and the Gariep.
Image: Unisa Press

About the book:
Kora or ǃOra in the language itself, was the Khoisan language spoken by the Khoi herders of the early Cape and the Gariep.

It was believed to have disappeared until only a few years ago, when Mike Besten, an historian at the University of the Free State, discovered a few elderly people who still retained some fluency in the language.

The author devised and carried out an emergency documentation in 2011, when she and her small team managed to obtain recordings from two of the last living speakers.

It was out of this experience that the idea for this book emerged.

The over-riding purpose of the work, which is envisaged as an act of cultural restitution, is to retrieve the all but discarded linguistic heritage of the Korana and Griqua people of South Africa – not only for the latter-day descendants of these communities, but for all South Africans.

The two opening chapters describe the linguistic classification of the language, and the sources of our earlier information about it.

The third and fourth chapters describe the sounds and structures of the language while the work also includes 43 heritage texts in the original language, and a dictionary.

The texts, which consist of historical narratives, accounts of cultural traditions, personal histories, folktales,and the lyrics of songs – have been newly edited and are presented with parallel translations in English.

In the online version of the book, approximately one third of the dictionary entries are linked to spoken examples provided by the two elderly speakers who worked with the linguists.

About the author:
Menán du Plessis is an Extraordinary Associate Professor in the Department of General Linguistics at Stellenbosch University. Her earliest studies spanned English language and literature, African literature, Xhosa, German and Italian, as well as topics in Linguistics. While still a student she published two works of fiction, A State of Fear and Longlive! After a temporary withdrawal from academia, she made a late return and completed a PhD on the southern African Khoisan languages at the University of Cape Town in 2009.