Told with astonishing maturity, honesty and compassion, 'Zephany' is also a story of what it means to love and be loved, and of claiming your identity 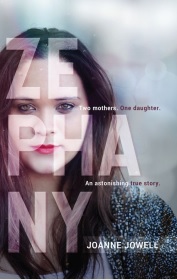 The kidnapping of baby Zephany Nurse from the cot beside her mother’s hospital bed made headline news. Miché is now 22. This is her story.
Image: NB Publishers

'I saw my mommy walking to the court with a hoodie on and a scarf covering her face. She looked almost like someone that was poor. People were cursing at her ... and that broke me. This is the woman who was there for me every day, making lunch for me and my friends when we came from school, and now here she is on television being called a criminal.'

The kidnapping of baby Zephany Nurse from the cot beside her mother's hospital bed made headline news. Desperate pleas from her parents to return her safely went unanswered. There was no trace of the baby. For 17 years, on her birthday, the Nurses lit candles and hoped and prayed.

Living not far away from the Nurses, 17-year-old Miché Solomon had just started matric. She had a boyfriend. She had devoted parents. She was thinking about the upcoming school dance and the dress her mother was going to make for her.

She had no idea that a new girl at her school, who bore an uncanny resemblance to her, and a DNA test would shake her world to its foundations.

Miché is now 22. This is her story – for the first time in her own words. Told with astonishing maturity, honesty and compassion, it is also a story of what it means to love and be loved, and of claiming your identity.

With an academic background in English and psychology, Joanne Jowell began writing professionally at age 28. Her first book, Managing the Quarterlife Crisis: Facing life’s choices in your 20s and 30s, was published in 2003. Joanne lives between the mountain and the sea in Cape Town with her husband and three children. Zephany is her sixth book.

This is Miché Solomon, whose name and face have been a secret for five years since she was identified as stolen baby Zephany Nurse.
News
2 years ago

Zephany Nurse ruling 'should not apply to other child victims'

Zephany Nurse, who was stolen in hospital after birth, has said that she supports the Centre for Child Law's stance on protecting children's ...
News
2 years ago

Zephany Nurse can reveal her identity to the world, the Pretoria high court has ordered.
News
2 years ago

Zephany Nurse, who was stolen from a hospital in Cape Town as a newborn and reunited with her biological parents when she was 17, wants to reveal her ...
News
2 years ago