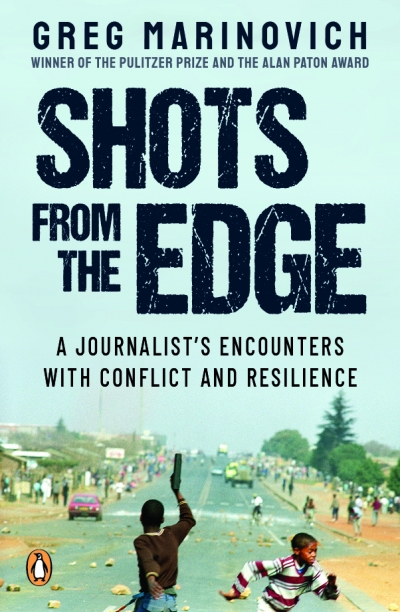 'Shots from the Edge: A Journalist's Encounters with Conflict and Resilience'.
Image: Penguin Random House

As an award-winning photojournalist and part of the “Bang-Bang Club”, Greg Marinovich has covered war and conflict all over Africa and the world.

In Shots from the Edge he recounts his experiences in these conflict zones, recalling interviews with the perpetrators and the victims of violence, from rebels, child soldiers and terrorists to peacekeepers, aid workers, rape survivors, orphans and amputees.

The book takes the reader throughout South Africa, and to Angola, Mozambique, Somalia, Rwanda, Bosnia, Chechnya, Palestine and many other contested zones.

With compassion and care, Marinovich documents more than two decades’ worth of turbulent history and reveals the people involved in the conflict. Some of the moments are deeply moving and profound; others so surreal as to blur into insanity.

From coming under fire with United Nations peacekeeping troops in the Lašva Valley (Bosnia) and being escorted around Mogadishu by a crew of gunmen for hire, to running through the streets of Johannesburg as Inkatha and the ANC faced off at Shell House, the reader is exposed to people, places and experiences that would otherwise be difficult to comprehend.

The accounts in Shots from the Edge are at once insightful, tragic, shocking and occasionally humorous, but above all, they are a poignant reminder of the brutality and indignity of war, and man’s capacity for cruelty.

Blue Murder: Another side to Marikana story

Will we ever know the truth?

Of the 34 crosses that were planted to remember the dead at the Marikana koppie where miners gathered daily during a deadly wildcat strike in 2012, ...
Lifestyle
6 years ago

Authors Zakes Mda and Greg Marinovich were named the winners of this year's Sunday Times Literary Awards, in association with Porcupine Ridge, at a ...
News
3 years ago

Stories behind the images that bring a photographer alive

He is regarded as one of the world's foremost conflict photographers, has won numerous awards, and his and his fellow South African photographers' ...
Lifestyle
6 years ago
Next Article