Searing honesty on road to the past

While the subject matter may be uncomfortable, the company of this indomitable woman makes the journey with her an uplifting one 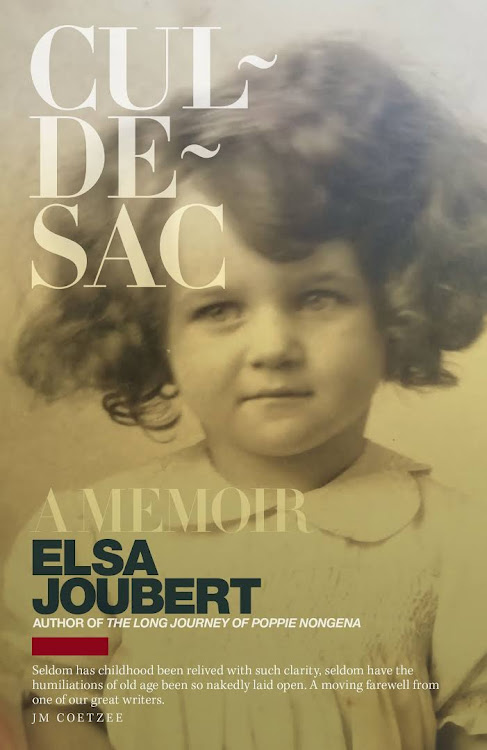 This review originally appeared in the Witness on September 9, 2019

Published when the author was 95 years old, Cul-de-Sac is an extraordinary memoir, a lovely book of great humanity. Elsa Joubert is best known for her novel, The Long Journey of Poppie Nongena, written at the height of apartheid in 1980. It did a great deal to open people’s eyes to the sheer brutality of the system.

However, she began her writing career as a travel writer, and now, as she explains on the first page of Cul-de-Sac, “the only road that can be ventured upon with a minimum of anxiety is the road to the past”.

The book covers the years after the death of Joubert’s husband and her move to a retirement home in Cape Town. Old age, with its diminishing abilities and horizons, is something that will face everyone, unless death intervenes.

As has often been said, it is not for sissies, and Joubert is no sissy. She allows her present to stir memories of her past, her childhood, her parents, her back-seat squabbles with her brother on long car journeys and her energetic prime, now vanished.

Inevitably, some of what Joubert writes is hard to read. There are deaths, of old friends and newer acquaintances as the population of her retirement home shifts. But there is also humour which leavens what could be a difficult subject. When Joubert is forced to use a walker, she names it StomJapie, imbues it with a personality and has conversations with it.

There is a searing honesty, unsurprising in the author of Poppie Nongena, about her identity as an Afrikaner. She still thinks of herself as an Afrikaans language patriot, someone for whom the language of her childhood is incredibly precious and which to a great extent defines her.

But she comes to feel, as, reluctantly at first, she makes connections with others who live in her retirement home, that the time has come to let go of group thinking and identity and, as she puts it “cultivate the little plot of ground you have been granted, and all else will follow”.

While the subject matter may be uncomfortable, the company of this indomitable woman makes the journey with her an uplifting one.

Elsa Joubert's latest book, The Hunchback Missionary, is a multidimensional novel that is informed and inspired by the archival history of the Dutch ...
News
5 years ago

26 local writers on what it means to be a woman in contemporary SA.
Books
9 months ago

‘Like family’ they may be, but they and their employers know they can never be real family
Books
1 year ago

1935-2015: André Philippus Brink, the celebrated novelist, academic and critic of apartheid, died on Friday on a flight back to South Africa from ...
Opinion & Analysis
5 years ago