There I was, a sixteen-year-old, Tata had been out of prison for just a few months, and I had the great privilege to be invited to meet him and break bread with him and Mama Winnie 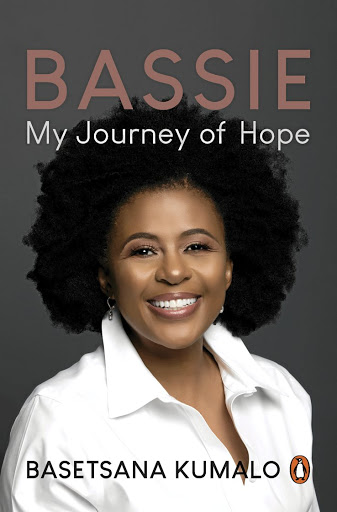 Basetsana Kumalo (née Makgalemele) shot to fame as a fresh-faced Miss SA in 1994 and soon became the face of the country's new democracy.

After a successful career in television, Bassie’s drive and ambition took her into the world of business. The street savvy that her entrepreneurial mother gave her stood her in good stead as she built a media empire. When she married the handsome businessman, Romeo Kumalo, in a fairytale wedding, they became SA’s sweethearts and “it” couple.

Bassie: My Journey of Hope recounts the stories of her life as a celebrity, including her relationships with mentors like Nelson Mandela, Winnie Madikizela-Mandela and Graça Machel.

She also shares the secrets of her success and all the lessons she’s learnt along the way, and opens up about the pressures of her high-profile marriage to Romeo, their heartbreaking struggle to have a family and how they made sure their loving and respectful union has lasted two decades.

Bassie also talks frankly about the domestic abuse she allegedly suffered at the hands of boxer Dingaan Thobela and the legal battles she had to fight to protect her name and her brand over the years. She gives her account of the stalker who harassed her for decades  and the non-existent “sex-tape” allegation that rocked her family and career, leading to painful experiences of cyberbullying.

Bassie is an intimate, inspiring and entertaining account of a remarkable life.

In June 1990, when I was in Standard 9 (Grade 11) at Trinity Secondary School in Lenasia, I was crowned Miss Soweto. I was so young – just sixteen – and all of a sudden I was in the newspapers, and being interviewed on radio and TV. Everyone was talking about the pageant and about me.

My family’s name was suddenly well known, and even people who hardly knew me would whisper: ‘That’s the Makgalemele daughter, she won the pageant!’ In December, all the provinces and Miss Soweto sent their winners to the main national pageant, Miss Black South Africa. As Miss Soweto, I competed and won.

I’ll never forget the prize – I furnished my mother’s house with that prize. It was a dining-room suite and a black-and-white faux leather lounge suite, with a lovely coffee table and a room divider in which my mother put all her special glasses and dishes for visitors, who came once a year. I could never understand that, but I tell you, if you touched those glasses or dishes, that would be the end of you!

By then my parents had built us a beautiful new home in Protea North. We had moved to the ’burbs, baby. When they designed that house – no. 2772 in Mark’s Square – they added a very long passage specifically for us to use as a ramp. We’d practise our moves and deportment up and down that passage, at times with books on our heads to learn to walk upright. So you thought Malcolm Gladwell with his 10 000 hours was playing a trick on us? No! He was not.

The first time I met Bra Si, as I came to call him, was when he came to our home for the bizarre verification visit. He had an open disposition and came across as friendly and warm. I got to know him better in the years that followed, and he turned out to be the most colourful person I had ever met. He was blessed with such a wonderful sense of humour, and his presence drew people to him wherever he went.

After I won Miss Soweto, Pink Parrot Promotions managed all my appearances, and Bra Si quickly became a trusted family member and elder son to my parents. They knew they could trust him with my safety in their absence and he would often agree to be my chaperone. Now Simon was good friends with Zindzi Mandela, Tata Nelson and Mama Winnie’s daughter. One day he came home and told my parents, ‘Your daughter has been invited to meet Tata Mandela and Mama Winnie.’

Of course, I knew about Madiba – I had seen the footage of him being released in February that year. I remember we had an old picture of him, which my father kept tucked into one of his books.

To this day I remember that picture of a young Madiba in a suit, his close-cropped hair with the distinctive side-parting, and I remember the smell of that book. Apartheid had tried its hardest to erase him from our memory, and at that time there were no new pictures of him in public circulation, and we didn’t know what he looked like now that he was older. Some of us hadn’t even been born when he was jailed for fighting for his people’s liberation. He was an enigma.

Now I was going to meet this enigma, this force, this being, the leader of our people who had been incarcerated for twenty-seven years. And who wouldn’t want to meet Madiba?

But I was just a kid. It was all very daunting and overwhelming. I remember I wore a white suit – a little panelled skirt with a jacket. Bra Si took me to Tata and Mama Winnie’s house in Orlando West, which we all referred to as Parliament (and still do today), because we believed that was the legitimate parliament of the people.

I have to pause on this moment. To be invited to the home of two fearless leaders of the struggle, who bravely fought for our freedom and emancipation from the oppressive and inhumane apartheid system, ranks as one of the highlights of my life.

I saw it, I felt it, I touched it, and, more importantly, I was embraced by it. What a lucky child I am. Truly, it cannot get better than that moment as long as I shall live.

That was the beginning of my journey of hope.

I remember being welcomed by Mama. ‘Hello, darling,’ she said, embracing me and bringing me into their home. And there he was. ‘I’m very proud of you, congratulations for winning the competition,’ said Tata.

I wish I could tell you everything that happened that day, what he said, what I said, but I’m sorry to say I hardly remember a thing. I don’t think I was able to string two words together!

It was almost like an out-of-body experience. He was larger than life in character and presence and energy and being. And his eyes showed such deep compassion. I do remember him asking me what I wanted to become, and I said I wanted to be a teacher.

My frame of reference was teachers: my mother was a teacher, my uncles were teachers, and my older sister Lerato was a teacher – she still is, at Fons Luminis Diepkloof after thirty years. In my community, in my township, teachers were held in the highest regard. I wanted to be like my mom. ‘That’s a good thing,’ he said. And by the way, I still want to be like my mom. She is not my SHERO – she is my HERO!

The rest of the visit is a complete blur. I was in awe. There I was, a sixteen-year-old, Tata had been out of prison for just a few months, and I had the great privilege to be invited to meet him and break bread with him and Mama Winnie.

While I don’t remember what we talked about, I do remember feeling embraced by them. Both Mama Winnie and Madiba loved me, and over the years they brought me into their home and into their hearts.

I completed my matric in 1991, and by then my sister Johanna had enrolled to study for her Bachelor of Commerce degree at Rhodes University in the Eastern Cape. Her marks at school were always very good, and because of her hard work and natural intelligence, she was able to secure donors who graciously funded her studies at a time when very few black students could even dream of attending that institution.

My older sister, Lerato, had graduated from Turfloop, which is now part of the University of Limpopo. She had taken up a teaching post at a school in Diepkloof, where she still teaches. My brother Mojalefa was attending high school at Topaz Secondary School in Lenasia.

In 1992, I was admitted to study for my Bachelor of Arts in education at the University of Venda. I was all set.

Basetsana Kumalo has suffered several knocks, including seven miscarriages and accusations of a sex tape. So writing a memoir has been cathartic, she ...
Lifestyle
10 months ago

Basetsana Kumalo on her memoir: It's the most important project of my life

"I laughed, I cried, I reflected, I counted my blessings, I am standing in the light of my own truth."
TshisaLIVE
11 months ago

Basetsana Kumalo launches autobiography and here's what went down

'I can’t think of black excellence without thinking of you, Basetsana Kumalo'
TshisaLIVE
9 months ago

Win a signed copy of the book and Lux products valued at R1,000
Books
10 months ago
Next Article

"No tears for trash": Ceramics as a response to gender-based violence
"This is an extension of who I am": Woman film director changing the narrative