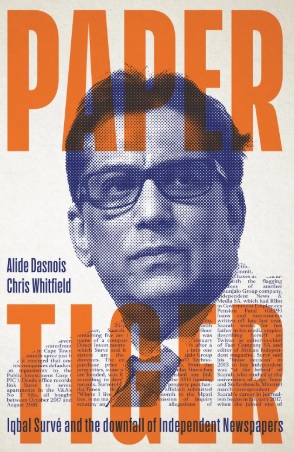 Many pointed to a Cape Times story about one of Survé’s firms as the real reason for his ire.

In the months that followed, newsrooms were torn apart by suspicion, recrimination and what many believed was a witch hunt to expel those not prepared to toady to the owner.

Alide Dasnois could not have been more mistaken when she wrote in the Cape Times of 6 December 2013 – the day of that fateful meeting with Survé at the Vineyard Hotel – that any concerns among readers that the newspaper might ‘become a vehicle for the expression of the corporate interests of the Sekunjalo Group … are unfounded’.

In the weeks and months that followed, the Cape Times and other Independent titles sprouted stories about the new owner, his companies and his business friends like buds in spring.

A pattern soon became apparent – none of the many controversies he was involved in were covered, and he was given carte blanche by his editors to respond to anything and everything.

Some of them, like Business Report editor Adri Senekal de Wet, lost no opportunity to defend and praise him.

It was Senekal de Wet, a former Sekunjalo stakeholder relations executive, who wrote a memorable ‘open letter’ to Survé in July 2016 in response to the article by Terry Bell in which he gave his findings after fact-checking Survé’s CV and his many extraordinary claims.

Presenting herself as a ‘white, Afrikaansspeaking woman, a single mother of four beautiful daughters’, and without actually contradicting anything Bell had written, Senekal de Wet waxed lyrical about the pleasures of working with ‘Doc Survé’ and expressed her sadness, disgust and frustration at the articles that had appeared about him in Media24.

‘Dr Survé, when I read the latest articles about you, I have to ask myself, why aren’t you reacting? This is ridiculous! How can ANYBODY question YOU? Honestly, Doc, I ask myself, are they mad, jealous or simply stupid.’

She said she had seen ‘many photographs with you and Madiba’ in Survé’s home, as well as ‘notes and books signed by Madiba to you’.

As regards Bell’s dismissal of Survé’s claim to have been mentored by struggle hero Ahmed Kathrada, Senekal de Wet said that Survé’s children called Kathrada ‘Uncle Kathy’, and that she knew Survé had hosted dinner or lunches with Kathrada at his house, playfully wondering why she herself had not been invited.

She said when she had asked Survé why he had not requested Kathrada himself to put Bell in his place, Survé replied: ‘Why should I dignify such nonsense by asking Kathy to respond? He has struggled enough having spent 27 years in prison. My struggle with these detractors is nothing compared to Kathy and Madiba’s suffering … There is no need to drag him or anyone else in to satisfy the Verwoerdian lust of a journalist.’

The absurdity of accusing Bell – an activist who had been jailed and gone into exile in the apartheid years, who was the first principal of the primary division of the Solomon Mahlangu Freedom College school in Tanzania for the children of ANC and Umkhonto weSizwe operatives, who had spent his career as a journalist reporting on the struggles of workers, and who had won the Nat Nakasa journalism award in 2010 – of ‘Verwoerdian lust’ apparently did not register with Senekal de Wet.

‘Doc, I respect you for that,’ she wrote. ‘Most people would have asked Mr Kathrada to admonish the journalist … Not you. You always remain dignified and put others first. That is why I knew you were different and special, walking into the office of Rapport many years ago – you had, and still have, the Madiba touch.’

Wondering why such a special and different person would be the subject of attacks, she came to the conclusion that ‘the Afrikaners’ – presumably a reference to the owners of Media24 – ‘will battle to tolerate … a black man that stands independent, after many years of owning the majority of the print media’.

‘Doc, it is only because you have an impact, I am convinced, that they need to do this to you!’

Finally, she listed some of his many philanthropic activities through the Survé Family Foundation, his work on women’s and youth empowerment, his sacrifice of R4 million in salary and bonuses to pay the salaries of employees facing retrenchment at Sekunjalo, his journey from childhood poverty to success, and even his regular visits to his mother on Fridays.

‘Doc, they can never destroy you in our mind: You remain our hero and inspiration!

‘Don’t give up. I salute you! And my offer: It will be an honour to be part of your journey, and if I could, I will do it for free!’

Her ‘offer’ was accepted: just three months later, in October 2016, Senekal de Wet was indeed to become part of Survé’s journey, when she was appointed editor of Business Report, though not, presumably, for free.

But though she was the most spirited of his praise-singers, he was by no means the only one.

In a published interview with Gasant Abarder in March 2016, he suggested that in buying Independent Newspapers, Survé had liberated black journalists ‘for a second time’ – a claim which was to prompt a scathing response from the former Cape Times writer Dougie Oakes.

‘It is high time’, Oakes wrote in December 2018, ‘that the ridiculous assertion be buried that Iqbal Survé helped to liberate black media workers of Independent Media “twice”, following his acquisition of the group from its previous Irish owners, together with all the other bullshit stories that have wafted through Newspaper House over the past few years.

‘According to the Cape Times editor, Aneez Salie, who sings this praise song whenever he is given the opportunity to do so, Survé did more than his bit in ushering in democracy in South Africa. But more than that, he also, almost single-handedly, transformed Independent Media into a group promoting the interests of the majority of South Africa’s population. It’s laughable,’ wrote Oakes.

A quick count of mentions on the Independent Online website shows that over the next five years Survé was to appear, often with photographs, at least 350 times in his newspapers: an average of 70 times a year, or about once every five days.

Events in which he was involved, from the World Economic Forum to BRICS to the ‘Saudi Arabia-South Africa Business Council’, made the news, often on the front page.

Survé’s every step at the World Economic Forum was also faithfully recorded by his editors, who interviewed him time and time again on everything from the world economy to South Africa’s prospects to the successes of his various companies and the evil antics of his competitors. Sometimes the headlines seemed better suited to religious figures.

Thus, on 13 February 2014, in a report co-authored by then Business Report editor Ellis Mnyandu, readers met ‘The man who wants to change the world’.

Readers of the Cape Times photo supplement ‘Society’ were regularly regaled with pictures of Survé and various members of his family out and about in town.

By late 2018, the proliferation of photographs of Survé prompted CapeTalk radio host Kieno Kammies to hold a mock ‘competition’ between the Cape Argus and the Cape Times to see which title could post the most pictures of the owner.

Even activity by Survé’s cronies made headline news, as when his Twitter praise-singer Chelsea Lotz, formerly of the Media Transformation Movement of South Africa, launched an India-South Africa business association.

Meanwhile, Sekunjalo Independent Media’s Chinese investors were rewarded with numerous articles including, in October 2017, front-page leads about the 19th Congress of the Communist Party of China, written by special envoy Gasant Abarder.

And critical pieces about the Chinese government were not welcomed, as Azad Essa, who wrote a foreign affairs column for the group, discovered.

Essa focused a September 2018 column on the more than one million Uyghur Muslims held by the Chinese authorities in internment camps. He explained later that he was fully aware of the stakes held by China International Television Corporation and the China-Africa Development Fund in Independent Media and knew ‘that the column might ruffle feathers’.

The piece was published in print in Independent’s newspapers around the country.

But when Essa asked when it would be published online, he was told by email that a decision had been taken not to publish it electronically.

‘When I asked for clarity from online editors, I received no response.

‘This morning my weekly column was cancelled. I was told the following: “With the redesign of our papers and the new system, there are changes regarding the columnists being used.” Is this the future of corporate censorship in SA?’ asked Essa.

On 12 February 2018 Business Report set another new standard by wishing Survé happy birthday on the front page of the section, in a space usually reserved for Eid, Christmas or Passover greetings to readers, and accompanying the wishes with his photo.

‘Team Business Report (BR) wishes Dr Iqbal Survé, Chairman of Independent Media, Happy Birthday. Doc inspired us to achieve greatness, to turn our challenges into opportunities, to consider our weaknesses as a motivation to improve and polish our strengths to beam with pride. Happy Birthday Doc – Adri Senekal de Wet.’

But it was to carry the fight against journalists working on other titles that the Independent newspapers were to be used most persistently and bluntly.