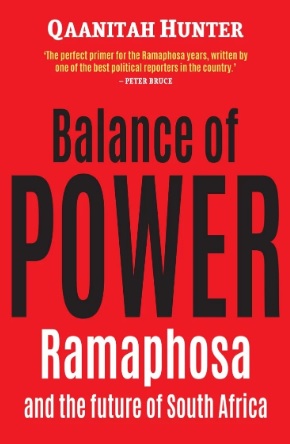 Balance of Power takes us into the heart of Cyril Ramaphosa’s rise to the ANC presidency and the political balancing act he has had to maintain as president.

Author Qaanitah Hunter shares fresh insights into Jacob Zuma’s removal as president and Ramaphosa’s ascendancy, taking the reader behind the scenes as she details Ramaphosa’s plans for South Africa - and his battles.

This book seeks to contextualise what the current political climate could mean for both the ANC and the future of South Africa.

Qaanitah Hunter is an award-­winning political journalist with Sunday Times.

She has done political analysis on SABC, eNCA, and Talk Radio 702 and written for Daily Maverick and Mail & Guardian.

Will Ramaphosa and his team come up with a plan to curb corruption?

As national elections loom, RW Johnson examines the state of the nation with pinpoint accuracy
Books
2 years ago

President Cyril Ramaphosa’s opening speech to the second annual investment conference was a balancing act between acknowledging the problems ...
Politics
1 year ago