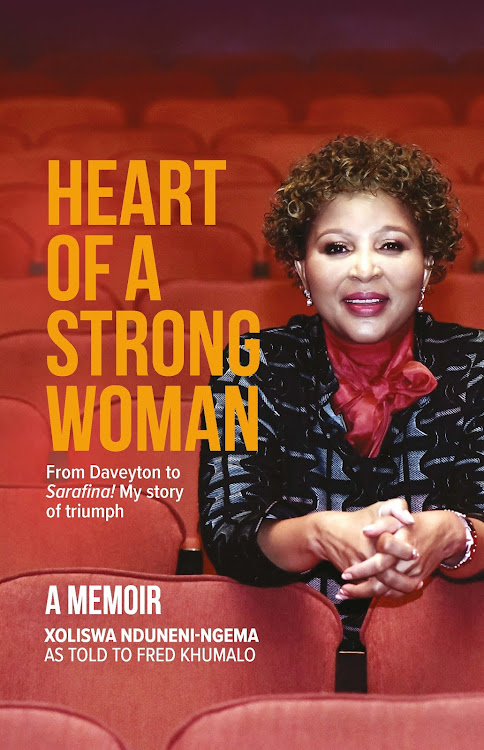 Together with Fred Khumalo, Xoliswa Nduneni­-Ngema's 'Heart of a Strong Woman' tells her powerful story of triumph and perseverance.
Image: Supplied

Xoliswa Nduneni-­Ngema loved the theatre from a young age and dreamed of being an actress. But she soon discovered that acting wasn’t for her – managing productions was.

After watching a Gibson Kente play, she meets rising­ star Mbongeni Ngema and their relationship begins. With each of Mbongeni’s productions, his fame and success grew and together they started a production company, Committed Artists, that birthed the Broadway hit Sarafina!

There were lavish parties with South African legends like Hugh Masekela and Miriam Makeba, first­-class flying to New York and shopping in Paris, but beneath the glamour, Xoliswa was starting to see a different side to her husband. What soon follows is constant fighting, cheating, allegations of abuse, polygamy and - eventually – a traumatic divorce.

This is not only Xoliswa’s story; it also sheds light on an important part of South African theatre history. Together with Fred Khumalo, Xoliswa Nduneni­-Ngema tells her powerful story of triumph and perseverance.

Xoliswa Nduneni-­Ngema is the CEO of the Joburg City Theatres (Joburg Theatre, Soweto Theatre and Roodepoort Theatre). She is also the former CEO of the South African State Theatre and former MD of Bassline. Xoliswa has a social science degree from the University of KwaZulu­-Natal and lives in Joburg.

Fred Khumalo is the author of 11 books, his latest work being The Longest March. He holds an MA Creative Writing degree from Wits University and is a PhD (Creative Writing) candidate at the University of Pretoria.

Chapter 3: Why not two wives?

To wake up to the noise of cows mooing and cocks crowing was something I hadn’t heard in a long time. Those sounds reminded me of the Transkei, more specifically that terrible, terrible school in Nzimankulu where I had spent an unhappy year before transferring to St John’s College. Nzimankulu bore traumatic memories.

The mooing of cows on my first morning at the Ngema house invariably hurled me back to my first year of rural life. But those bad memories soon took a back seat when I realised that my lovely Mbongeni was right there next to me, smiling at me, asking me how I’d slept. He gave me strength and hope. He brought me joy. With him at my side, I could withstand anything. Including the traumatic mooing of cows and the crowing of cocks.

I got dressed in an outfit appropriate for a makoti trying to make a good impression on my soon-to-be in-laws. Instead of the pants I normally wore back home, I put on an ankle-length skirt. The Ngema household was a four-bedroomed house with a lounge plus an outside kitchen. It being a weekend, the yard was full of people: children who were free from school; middle-aged women – who turned out to be aunts of Mbongeni – and other relatives. Although I had been introduced briefly to some of these people when we had arrived the previous night, it was expected of Mbongeni to properly introduce me in broad daylight, to all those in the yard and those who would later come to the house to ‘view’ me, as was custom. With seven siblings of my own – I was number five in a family of four girls and four boys – I’d always known ours was a big family. But by Mbongeni’s family’s standards, ours was an average-sized family. There were around 30 people in that family. It was just overwhelming. So many children buzzing about, women walking in and out of the house. I soon got sucked up in the maelstrom of activity around the yard. Cleaning things, preparing breakfast.

It helped that I had been properly trained at home. Unlike many city girls, I knew my way around the kitchen. I knew that pots and pans were not for decorative purposes.

Much later in the day, when the sun was already high, Mbongeni asked me to take a walk with him. He said he wanted to introduce me to someone important. We left the yard and walked across the road to a rondavel where an old man was sitting on a wooden stool in the sun, his back against the wall. As it was the middle of winter, he had on a heavy coat over his worn pants. He was wearing mbadada sandals – he had the longest toenails I’d ever seen. That’s what first caught my attention. Feeling guilty and embarrassed at my intrusive gaze, I looked away. Then I looked back at him. At his face. He looked ancient, but his eyes, even with the cataracts brought on by old age, were still alert. They were eyes that had seen a lot and they were looking at me; seeing into me; seeing through me. Suddenly I knew who this old man was. This was Mbongeni’s grandfather, about whom he had told me so much. He was over 100 years of age.

Mbongeni, who adored his people, held the ancient man in high esteem. He had told me numerous stories of the battles the old man had fought in, but more than anything else, he admired his grandfather’s storytelling abilities. Even after years of not being with his family, with his grandfather, Mbongeni kept the old man alive in the stories he would tell me back in Johannesburg. He made him sound larger than life, invincible and immortal. Now I was confronted with the evidence: not only was this grandfather alive, but he seemed highly alert for a person of over 100 years. The repartee that took place between the two of them while I sat there fidgeting told me that the admiration was mutual. There could be no doubt about their love for each other.

While they talked, I also remembered that one of Mbongeni’s admired artists was Jerzy Grotowski. He had first been exposed to this theatre legend from his former boss and mentor Gibson Kente. Mbongeni would explain that Grotowski saw theatre as a collaborative effort between the actors and the audience. Like many Africans I could readily relate to this method, even though I’d never been exposed to Grotowski’s work. I could relate simply because in African storytelling, the storyteller engages in a call-and-response game with his audience. In African storytelling, it is never a one-way process. The audience is encouraged to interject, to clap, to laugh out loud, to jeer even.

In later years, Mbongeni would start developing a theatrical theory – inspired by both Grotowski and his own grandfather – which he called ‘theatre of the ancestors’. Through this experimentation he wanted to prove that the stories we tell are not necessarily our own. They come from our past. They come from the ancestors. When he finally met Grotowski, sometime in 1989, he shared the theory with his idol, who was highly enthusiastic. This inspired Mbongeni, years later, to put this theory into practice. He created The Zulu, one of his most powerful yet underrated productions. In The Zulu he acts and tells the stories of his grandfather, uMkhulu uVukayibambe, dating all the way back to the Anglo-Zulu War of 1879, which his grandfather lived through.

All of these memories flashed through my mind as I stole glances at the ancient man in front of me. In proper Zulu custom, Mbongeni greeted his grandfather before offering me a bench to sit on. I greeted the old man as well before I sat down on the bench. The two men then continued talking as if I wasn’t there.

At long last, they paused to look at me. Mbongeni, in a roundabout way, told uMkhulu uVukayibambe that I was the makoti that he had mentioned he was bringing home. Apparently, he had written a letter, alerting the elders in the family – mainly his mother, Ma Hadebe, and uMkhulu uVukayibambe – that not only would he be coming to see them after years of absenteeism from the ancestral home, but he was bringing with him a woman he wanted to marry. The old man looked at me long and hard. Finally, he said, ‘Wemfana, usilethele iShangane!’ (Now, boy, you have brought us a Shangaan!) I wanted to burst out laughing at the irony. He was calling me a Shangaan, after one of the much maligned ethnic groups in the country. The stereotypical Shangaan is supposed to be very dark in complexion, extremely badly dressed, and generally out of kilter with modernity. As a result, when a black person refers to another one as a Shangaan (even if the ‘accused’ is not from that ethnic group), this is done as a way of provoking the other person into a fight. The funny thing was that the old man – like most of the Ngemas – was himself very dark in complexion. Personally, I am very light-skinned; after all, my mother is of coloured stock. So, here is this old man calling me a Shangaan.

Still speaking to Mbongeni, he continued, ‘Do you trust this Shangaan?’ Not for a moment was I offended. I could tell that the old man, like Mbongeni himself, loved jokes. I could tell that there was no malice in what would have been regarded as a slight. He took his time asking me about my people, where they came from. He really was interested in me. Then the old man said, ‘Have you told this Shangaan about the mother of your child? Where is she anyway?’

He said, ‘Yes, I have told her that I have a child with another woman.’

‘I am going to kill you, bitch’: Ex-wife tells of alleged abuse by Mbongeni Ngema

For years, Xoliswa Nduneni-Ngema’s jet-set lifestyle of travel and shopping was a veneer that covered an unhappy relationship with an allegedly ...
Lifestyle
1 year ago