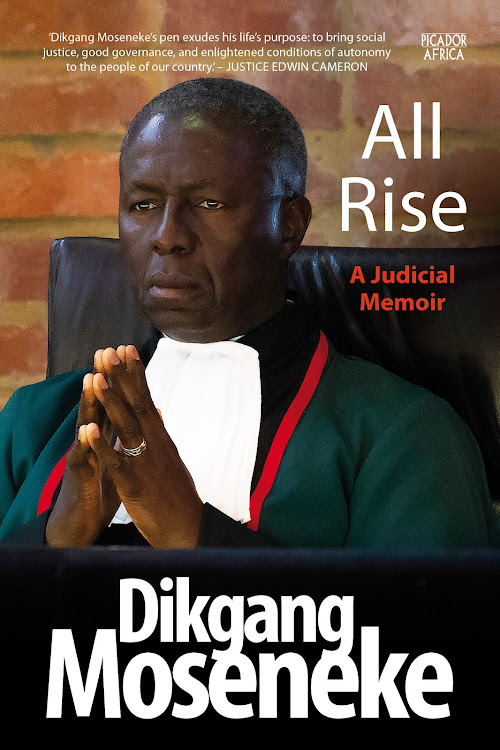 Practising law during apartheid SA brought with it unique challenges, especially to professionals of colour, within a fraught political climate. After some years in general legal practice and at the bar, and a brief foray into business, Moseneke was persuaded that he would best serve the country’s young democracy by taking judicial office.

All Rise covers his years on the bench, with particular focus on his 15-year term as a judge at SA’s Constitutional Court where he rose to the position of deputy chief justice. As a member of the team who drafted the interim constitution, Moseneke was well placed to become one of the guardians of its final form.

His insights into the Constitutional Court’s structures, the personalities peopling it, the values it embodies, the human dramas that shook it and the cases that were brought to it, make for compelling reading.

Dikgang Moseneke's 'All Rise' offers a unique, insider’s view of how the judicial system operates.

The book includes his early career, his tenure with Judge Chaskalson as the chief justice, the appointment of Chief Justice Mogoeng Mogoeng, the Hlophe matter and Moseneke’s experience as the arbitrator in the Life Esidimeni Commission of Inquiry.

In 2018 Moseneke received the Order of Luthuli in Gold, the SA government’s highest national honour, for his “exceptional contribution to the field of law and the administration of justice”.

All Rise offers a unique, insider’s view of how the judicial system operates at its best and how it responds when it is under fire. With this new memoir, Moseneke hopes to spark conversations around the current state of the SA judiciary.

On balance the court came down on the side of a substantive notion of fairness in criminal cases as it sought to give content to the fair trial ...
Opinion & Analysis
7 months ago

It took decades for the family of Ahmed Timol to uncover the truth about their forbear’s apartheid murder, writes Tymon Smith
Books
9 months ago

The courts have become the battleground for political struggle. Two of South Africa’s finest legal minds consider the implications
Books
2 years ago
Next Article