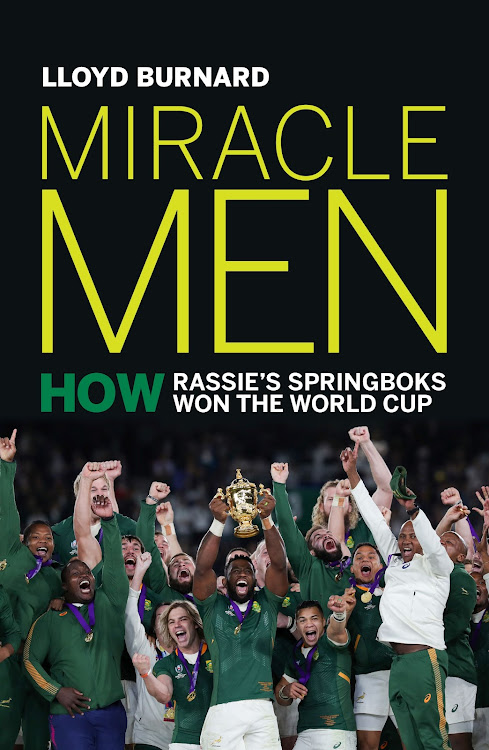 'Miracle Men' recounts the thrilling journey of a team that went from no-hopers to world champions.
Image: Supplied

When Rassie Erasmus took over as coach of the Springboks in 2018, few thought they had a chance of winning the Rugby World Cup. The Boks had slipped to seventh in the world rankings and lost the faith of the rugby-loving public. Less than two years later, jubilant crowds lined the streets of South Africa’s cities to welcome back the victorious team.

Sportswriter Lloyd Burnard takes the reader on the thrilling journey of a team that went from no-hopers to world champions. He examines how exactly this turnaround was achieved. Interviews with players, coaches and support staff reveal how the principles of inclusion, openness and focus, as well as careful planning and superb physical conditioning, became the basis for a winning formula. The key roles played by Rassie Erasmus and Siya Kolisi shine through.

There were ups and downs along the way: beating the All Blacks in Wellington during the Rugby Championship was a high point, but then came Kolisi’s injury, while in Japan the distractions of a volatile support base sometimes shook the players’ focus. Miracle Men is filled with marvellous anecdotes and sharp insights. It is also an inspiring testimony to what can be achieved when a group of South Africans from all backgrounds come together as a team.

Tendai ‘Beast’ Mtawarira was the hometown hero in Durban, and chants of ‘Beaaaaast’ followed his every movement. A city that is so often criticised for its failure to show up for major events, Durban obliterated that reputation on the day. Thousands gathered outside the City Hall and lined the streets of the CBD with Mtawarira, Kolisi, Am and Mapimpi the centres of attention.

At a function at Moses Mabhida Stadium, where the Boks were put through their obligatory daily schmooze with local officials, Mtawarira spoke about his retirement and ending an 11-year, 117-Test career on the ultimate high. Never a man of many words, Mtawarira thanked the people of Durban for accepting him as one their own since he first joined the Sharks back in 2006.

Former Sharks and Springbok coach Ian McIntosh was one of the high-profile names in attendance at that function. Revered in Sharks country, McIntosh’s reaction when Mtawarira completed his duties and was escorted back to the Bok bus told its own story of exactly how great this moment was.

‘Sorry, I’ve got to get Beast quickly,’ McIntosh yelped at me in mid-conversation, scampering off towards the huddle that had formed around the third-most-capped Bok of all time. ‘I’ve got to get this signed for my grandson,’ he added, holding up a Springbok jersey.

Even a former Bok coach was not immune to the ecstasy that was in the air that week.

That afternoon, the Bok plane flew to East London, landing just before 5pm. East London Airport is modest in size, and at one stage the glass doors separating baggage reclaim from domestic arrivals looked set to buckle under the weight of the hundreds of supporters pressed up against them in anticipation. Eventually the doors slid open and the Boks, led by hometown hero Lukhanyo Am, trophy in hand, made their way out.

The flimsy security tape that had been erected to create a pathway for the Boks was swept aside, and the arrivals hall, like almost everywhere else on the trophy tour, turned into an uncontrollable throng. The reactions were almost spiritual, but Am took them in his stride, wearing a slight smile and showing the same composure and panache he had displayed in setting up Makazole Mapimpi for that historic try during the World Cup final.

The scenes outside the East London City Hall the next day were even more staggering. Thousands had crammed into the main square in what must have been an excruciating wait. Signs celebrating Mapimpi and Am’s homecoming were everywhere. The sheer number of people was intimidating, and Springbok media manager Rayaan Adriaanse had to pull an overly enthusiastic Herschel Jantjies away from the crowd as the Bok scrumhalf looked set to hop over the railings and celebrate with the masses.

Kolisi and his men eventually left the bus to make their way towards a stage where the skipper would deliver yet another speech. There was an uneasy moment on the way back when the crowd broke through one of the barriers keeping a safe distance between them and the bus. Security got most of the Boks back on board in time, but a lagging Francois Louw was swallowed up in the pandemonium. He eventually extricated himself, but by then the green-and-gold vehicle was surrounded by a rapidly growing and overexcited swarm of people. It could have turned into a serious security issue, with traffic and metro police unable to move the fans back.

In a moment as electric as any on the trophy tour, a fearless Kolisi then climbed onto the roof of the bus, launched the Webb Ellis Cup over his head, and celebrated as if he’d just won the final all over again. In that moment, the bus could have toppled over, but it wouldn’t have mattered. This was South Africa coming together to celebrate, and nothing was more important to the captain. The mob never subsided, but somehow the bus driver was able to guide the vehicle on its way out of the city centre.

For many of the players, this was the first time they had been to communities like Pefferville, Buffalo Flats, Gompo, Scenery Park, Mdantsane and Zwide. The Eastern Cape has long been considered a nursery of black South African rugby talent, yet its parent unions – Border and Eastern Province – have consistently underdelivered on the professional stage. The lack of black players at Springbok level over the years, combined with the fact that private schools in South Africa have historically been the breeding ground for professional players, painted a picture of rugby as not being for everyone. The Eastern Cape leg of the trophy tour suggested otherwise.

The Boks were celebrated by poorer communities, and though their difficult living conditions were obvious, the people rejoiced. This time, the Bok heroes they were celebrating belonged to them, and it was unlike anything they had seen before. ‘Rugby here means so much to so many people, and we saw that today,’ Am offered at the end of the East London leg.

On the next day, in Port Elizabeth, one dedicated fan flanked the Bok bus on foot for over ten kilometers from the city centre to Mzwandile Stick’s home township of New Brighton before he eventually ran out of steam.

In Zwide, the attention shifted to Kolisi. The bus drove past Dan Qeqe Stadium, the home of the African Bombers Rugby Club, where Kolisi honed his skills as a youngster.

Springbok captains are not meant to start here.

‘That’s the road where Siya watched the 2007 final in a tavern,’ offered one local who had booked a ticket on the sponsors’ bus that was following the Boks. Throughout Zwide, the feeling of pride was clearly evident. A community living on the breadline had produced a World Cup-winning Springbok captain, and that would be celebrated.

This is the updated edition of the highly successful unauthorised biography of Springbok captain Siya Kolisi. It includes all the games at the Rugby ...
Books
2 years ago

"All too often, our sporting debates lack gravitas and maturity"
Books
2 years ago