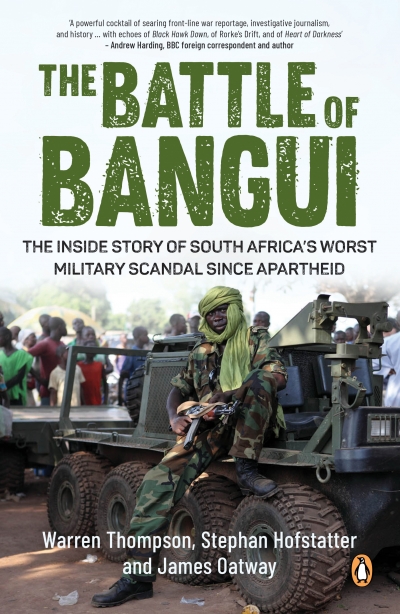 'The Battle of Bangui' lays bare for the first time both the litany of strategic, tactical and logistical blunders that ended in military disaster.
Image: Supplied

A powerful cocktail of searing front-line war reportage, investigative journalism, and history ... with echoes of Black Hawk Down, of Rorke’s Drift, and of Heart of Darkness’
— Andrew Harding, BBC foreign correspondent and author

In March 2013, SA suffered its worst military defeat since the end of apartheid. After a battle that lasted almost two days, 200 crack troops who engaged 7,000 rebels in the Central African Republic were forced to negotiate a ceasefire at their base. Thirteen SA soldiers died in the battle, with two more later succumbing to their wounds.

The mission was shrouded in mystery from the start. The deployment and the diplomatic machinations that led to it were kept secret from the SA public and parliament. So, too, were an assortment of shadowy commercial interests held by businessmen, some with close ties to the ANC.

In an investigation spanning more than seven years, the authors gained exclusive access to the soldiers who fought valiantly against overwhelming odds; travelled to Bangui to obtain documentation and meet the rebel leaders who took part in the battle; interviewed a deposed dictator living in exile in Paris; and spoke to the widows of the fallen soldiers. They also met influential fixers and dealmakers, and unearthed secret files containing bribe agreements to unravel an intricate web of corruption and patronage reaching the highest echelons of power in SA and the CAR.

After close to a decade of speculation and rumour, The Battle of Bangui lays bare for the first time both the litany of strategic, tactical and logistical blunders that ended in military disaster, and the secret diplomatic and commercial deals that led to SA’s worst foreign misadventure of the democratic era. It’s also a cracking war story filled with heroism, camaraderie, terror, pathos and triumph over adversity.

'This is like a second home to me': Meet the warriors in our invisible war

South African soldiers, air crew and doctors are heavily involved in the conflict with rebels in the war-torn eastern DRC. Jeff Wicks visited their ...
Opinion & Analysis
2 years ago

What really happened in Cuito Cuanavale?