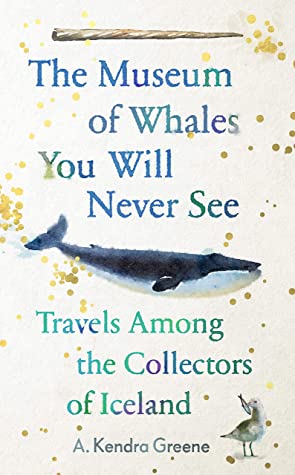 'The Museum of Whales You Will Never See' is an elegantly written and beyond quirky read.
Image: Supplied

The Museum of Whales You Will Never See
A. Kendra Greene
Granta

Caught by the title and the subtitle, which is Travels Among the Collectors of Iceland, I picked this book out of a pile to be reviewed. It sounded either unutterably twee or quirkily fascinating. But I was hopeful: travel writing has long ceased to be a straightforward catalogue of journeys and chance encounters and has moved into more philosophical realms.

The author travelled in Iceland, that most remote, sparsely populated and very different country, which boasts about 265 museums and collections, some very small. The country doesn’t have a long history of collecting – most of these museums are comparatively recent, usually started by someone who is often still involved.

She begins with the Icelandic Phallological Museum, which boasts that it is “probably the only museum in the world to contain a collection of phallic specimens belonging to all the various types of mammal found in a single country.” (Yes, humans included.) It also contains silvered casts of the relevant parts of the Icelandic handball team that won silver at the 2008 Olympics. But it’s not a jokey museum – it’s even quite solemn. By the end of the book, I must admit I was wondering whether the salient characteristic of Icelandic people was the absence of a sense of humour.

Besides the penises, Greene finds a museum of stones, which attracts busloads of tourists; museums of fake whales; the now vanished era of herring fishing; sea monsters, including an invisible boy; stuffed birds collected in memory of a man who drowned in an accident and even a museum dedicated to “stuff”.

In the Museum of Sorcery and Witchcraft she finds (mercifully fake) “necropants”. These are made from the flayed skin of a volunteer who bequeaths them after death to an impoverished friend. Once on, the wearer can slip his (it’s a boy thing) hand into the scrotum and magically extract a few coins. You must never take them off, but you also mustn’t die in them. Complicated.

Greene is interesting on what makes a collection into a museum, how it evolves from one person’s obsession into something that has a meaning for other people as well. The elegantly written book is beyond quirky, but is also a fascinating insight into the psyche of a remote and mysterious country.

Many great books aren’t on lists such as those of The Guardian and Time Magazine. They should be
Opinion & Analysis
7 months ago

A 'country bumpkin's' search for identity in transitional, urban SA

Thabo Abram Molefe was just six years old when he and his family left their tenancy on a Boschfontein farm. Their destination: a vacant stand in ...
Books
7 months ago

Activist pens a story for girls to embrace their Afro crowns

Zulaikha Patel's 'My Coily Crowny Hair' approaches the issue of Afro hair through the eyes of the main character Lisakhanya, a seven-year-old girl.
Books
7 months ago