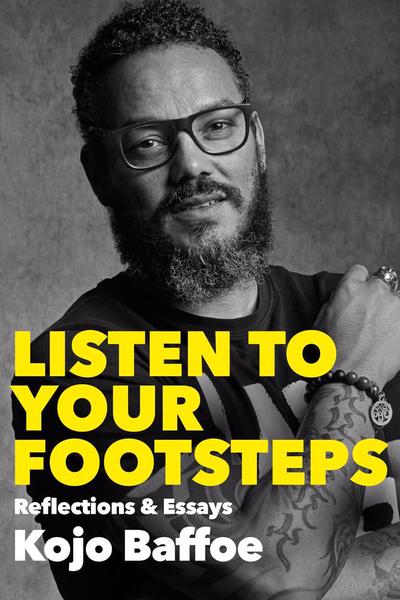 'Listen to Your Footsteps' is an honest and, at times, raw collection of essays from a son, a father, a husband, a brother and a man deeply committed to doing the internal work.
Image: Supplied

Kojo Baffoe embodies what it is to be a contemporary African man. Of Ghanaian and German heritage, he was raised in Lesotho and moved to SA at the age of 27. Forever curious, Baffoe has the enviable ability to simultaneously experience moments intimately and engage people (and their views) sincerely, while remaining detached enough to think through his experiences critically. He has earned a reputation as a thinker, someone who lives outside the box and free of the labels that society seeks to place on us.

Listen to Your Footsteps is an honest and, at times, raw collection of essays from a son, a father, a husband, a brother and a man deeply committed to doing the internal work. Baffoe reflects on losing his mother as a toddler, being raised by his father, forming an identity, living as an immigrant, his tussles with substance abuse, as well as his experiences of fatherhood, marriage and making a career in a fickle industry. He gives an extended glimpse into the experiences that make boys become men, and the battles that make men discover what they are made of, all the while questioning what it means to be ‘aman’.

Author details
Baffoe is a writer, speaker, entrepreneur and self-proclaimed retired poet. He has published two collections of poetry, Voices in My Head along with And They Say: Black Men Don’t Write Love Poetry. He has edited magazines such as Blaque, Destiny Man and Afropolitan and is also the former host of ‘Life with Kojo Baffoe’ on Kaya FM.

I read Thomas Hardy’s Far from the Madding Crowd when I was in high school and the title has always stuck with me, although it is probably as much for the idea of a ‘madding crowd’ as it was for embarrassing myself in English class because of it. We were supposed to have written a composition on it and, because I hadn’t actually read it, I read the first two chapters and the last chapter and wrote an essay that totally missed the mark.

To feel alone amidst the madding crowd can be a painful place to be. And, for large portions of my life, that is how I have felt. Alone, sometimes lonely, amongst people, even with people who are supposed to be my people. This goes as far back as I can remember, to the photograph of me, in the middle of people, as a toddler.

The concept of belonging is strange. The world can see you as belonging, but more important is how you see yourself. I have never felt like I fully belonged, anywhere. In my family, I am the white sheep, the only one with a white mother, the only one with European heritage, my mother’s only child. We weren’t raised that way. We were all Baffoe children, raised as siblings without any ‘step’ in the mix. But I still felt different because I was different. And there were elements of their lives, beyond the home, that I wasn’t part of.

I was fortunate to travel at a young age and attend such a culturally diverse school that my influences have always been broad, overlapping but not always in line with the people I grew up with.

At varsity, I was the Sesotho-speaking, not-Coloured guy who lived in res, surrounded by and socialising with mainly Black people. I could never run away from me because there is only one half-German, half-Ghanaian Mosotho with a typical Ghanaian name. Plus, culturally, I am a mishmash of all of these, often drawing from what makes sense to me and discarding what doesn’t.

If someone said they had heard of me, it was probably me they were talking about and not a case of mistaken identity.

I was considered ‘a pretty boy’ for most of my adolescence and even into my twenties, and that also drew attention when I preferred to lurk on the edges, entering spaces quietly and sussing out the space before I actually engaged.

Getting involved in the poetry scene forced me to learn how to stand up in front of people, and being involved in the media, especially Destiny Man, meant that I had to get comfortable with hosting and speaking at a range of events. I still get very nervous before I have to get up in front of people and like to arrive early just to get comfortable with the energy in the room.

Poetry and Destiny Man brought with them a bit of public profile in South Africa, and yet, despite being considered South African in some spaces, when it boils down to it, I am a ‘foreigner’, which often crops up when it comes to doing any type of work that would be easier if I was BEE-compliant. I have heard the comment ‘by the way, you are not South Africa’ countless times and it always reminds me of my otherness.

I have worked in so many different industries that I could never define myself according to my job and never quite belonged to any specific community, which has allowed me to traverse multiple spaces. Estelle used to throw me surprise birthday parties, to my chagrin, and the thing that always stood out was that the people invited often came from very different worlds and would, under normal circumstances, not cross paths. This was, of course, before social media.

Being an immigrant in Lesotho, I have been considered not Mosotho enough. Having grown up outside of Ghana my whole life, in some quarters, I am not Ghanaian enough. There have been instances, particularly when I have accomplished things deemed of value, when I have been claimed by those places. The Germans have never claimed me, however, but there’s still time.

There was a time when all of this really bothered me, but, as I have grown older, I have learned to embrace my otherness because that is what has enabled me to do some of the things I have done and given me perspectives that help me contribute to those around me in ways that others can’t.

This idea of being other, of not quite belonging anywhere yet belonging everywhere is now a source of pride.

Being born in Taiwan and raised in South Africa can make for a confusing identity, writes Michele Magwood
Books
2 years ago

'When the Village Sleeps' is a visionary novel about what the loss of identity and dignity do to a people afflicted by decades of brokenness.
Books
8 months ago