'Trust You're Well' - delightful, bite-sized pieces of correspondence to chew on 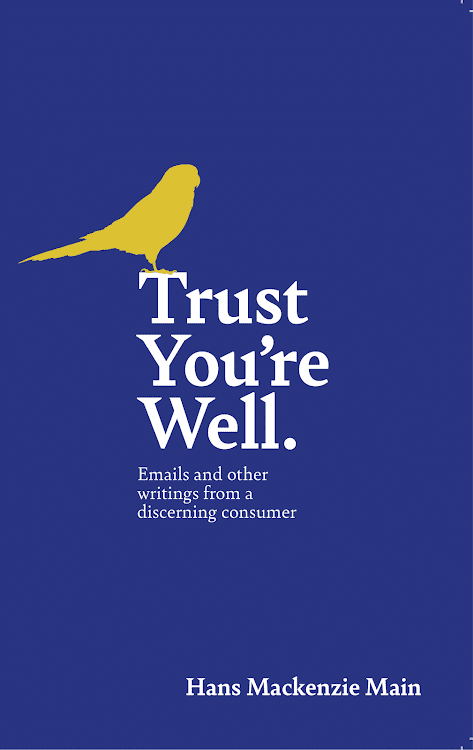 Correspondence literature is not new. Tonally, on the one end, there are local examples aplenty (Ben Trovato comes to mind) of comic authors throwing something in the mail to see what comes back. On the other end, you might find the last letters of Sylvia Plath or the personal letters of Winston and Clementine Churchill.

Trust You’re Well - a collection of email conversations between Hans Mackenzie Main and whoever - doesn’t sit comfortably on either end of the above scale, or anywhere in the middle. It’s funny yet scathing, sarcastic yet heart-warming. The humanity shines through early on, when, discussing motorcycles with a Harley-Davidson dealer, Main asks for help to lessen the noise on his ageing father’s three-wheeler. On another occasion, he commiserates with a recording studio having to listen to a lengthy WhatsApp voice note he’d sent them as an audition for new talent. Telling of the surprisingly gentlemanly tone of his complaints is that many of Main’s victims offer their services free of charge. The exchanges are always amicable, beginning and ending (in most cases) in the friendliest ways imaginable.

A prevailing theme in the book is Main’s urge to get away. He seems to be perpetually on the run - losing outdoor equipment on the Wild Coast and heading up Table Mountain in poor weather. The email section of the book ends with a mayday of sorts to a lighthouse keeper on a Canadian peninsula asking whether there’s space for Main, his fiancée and their two cats to move in. The reply from the lighthouse is quite surprising. (Apparently there is space, the only problem being travel restrictions caused by the pandemic.)

The book’s “Other Writings” include a fresh take on the male identity (Main took his fiancée’s surname) as well as an insider’s look at mental illness medications and a job interview that goes desperately south when theatre of the mind comes between a jobless man and a promising career at a leading advertising agency. At the very end, readers are treated to an anthology of satire news reports - introduced as an “acquired taste”, much like marmalade and Turkish Delight – under headlines like “Bank Teller Smiles at Customer” and “Company Devotes Monday Morning Planning Session to Strategy to Shorten Monday Morning Planning Sessions”.

Typical of its genre, Trust You’re Well is a piecemeal read offering bite-sized written pieces of sheer delight. It’s a book you pick up as a quick-fix for a bad mood or a series of laughs on a lazy Sunday afternoon. The book is available in Wordsworth and Exclusive Books stores.

'Told with Snyckers’ usual razor-sharp wit, this book is poignant and hilarious.'
Books
1 year ago

Graham Norton is best known as the lively and urbane host of his TV show, but he is also a writer.
Books
1 year ago