Extract | ‘It’s The Answers For Me’ by Khaya Dlanga 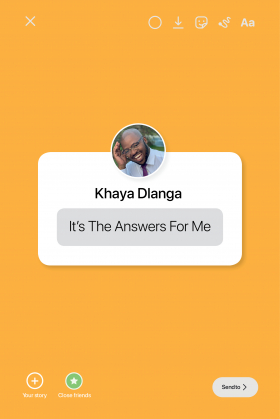 'It's The Answers For Me' captures our collective mgowo.
Image: Supplied

Pan Macmillan is proud to be releasing the fourth book by Khaya Dlanga: It’s The Answers For Me.

In March 2020, Dlanga found himself bereaved, alone and facing an indefinite lockdown as a result of Covid-19. Like most of us, he turned to social media to maintain some human connection.

It’s The Answers For Me is the result of Dlanga’s ongoing Q&A interactions with his followers on Instagram and is evidence of the genuine communities that are formed on social media.

It’s a record of our collective mgowo (going through the most) and a nation going through what have been the most bizarre (and longest) years in recent history.

Dlanga’s ability to write authentically about himself and his world has resonated with readers from all walks of life.

Dlanga is the author of three previous books: In My Arrogant Opinion (2012), To Quote Myself (2015), and These Things Really Do Happen To Me (2018). By day Dlanga is a marketing executive and has held senior positions in some of the country’s and world’s most recognisable brands.

‘Leaving a seven-year-long relationship. I don’t think I’ve ever been happier in my life.’

‘Checking into a wellness clinic for my mental health. It saved my life.’

‘Selling my second-hand car to be a pedestrian again because it was too costly. Saves a lot of money.’

‘Moving back to SA after everyone told me I am a fool for leaving London.’

‘Cutting ties with my family. Especially my mother. She drove me into a mental institution. Very abusive lamfazi’. (That woman.)

‘Getting into a relationship with my friend’s ex. All he wants was love and attention. She was rude, overbearing.’

‘Marrying again now that the dust has settled. He’s rich so I’m good for now.’

‘Not fucking whoever I wanted because ndisoyika abantu bazothini. I realized soloko benento yothetha.’ (Because I was too concerned about what other people would say. They always have something to say anyway.)

‘Dating a guy who is 18 years older than me. Couldn’t have been happier in my life.’

‘Getting my sister arrested. She used to steal my cash and then stealing bank cards and then on her first bank bombing, I snitched.’

KD: There should be a movie about your sister.

‘Leaving a toxic workplace without a plan. I actually survived.’

‘Being away from my family because I could have been in jail by now. My aunt poisoned my mom.’

‘Taking a chance on love with the most unlikely person. We’re going on two years now.’

‘Standing up for myself. Always allowed people to define who I was.’

‘Ratting out my male psychologist for sexual assault. Apho ke I went there to receive therapy for rape. He was a varsity director and a teacher at a church. He lost both.’

‘Cheating on my lazy ex.’

‘Not relevant but thank you for helping us open up. Most of us are learning how to open up right here. I’m not kidding. You’re saving a lot of lives.’

KD: I have received a lot of messages like this one. Thank you.

‘Reporting my father for rape of my cousin and testifying against him in court.’

KD: This was so brave and difficult and amazing.

‘Cheating on my girlfriend.’

‘Leaving my husband three months after I gave birth to our third born.’

‘Introducing my boyfriend to my family. He is from Zimbabwe. I thought abaz’ umamkela.’ (I thought they wouldn’t accept him.)

‘Having sex with my ex’s brother while we were together. Ndaphola nicely.’

‘Being myself even when my insecurities take over.’

‘Becoming a teacher. Everyone said I will hate it but I love my kids.’

‘Leaving an eight-year-long relationship and getting into a romantic relationship with a friend I made off Twitter 12 years ago.’

‘Having an abortion. Best decision I ever made.’

‘Dating my current partner who happens to be 20 years older than me. Always dated younger men.’

‘Cutting ties with my brother after damaging accusations. Must say it is peaceful without him.’

‘Telling my sister I am depressed. It’s been three years of taking meds and seeing a shrink with her help.’

‘Going out on a date with my now husband when I wasn’t single. That was almost four years ago.’

‘Leaving a partner when everyone advised me not to leave because he is wealthy. But he is arrogant and toxic.’

‘Seeing a psychologist. Thought it was a white people thing. Now I love it.’

‘Dumping my ex-girlfriend right after she drank bleach because she felt guilty for cheating on me.’

‘Bunking my whole first year of uni because I knew it was not my calling.’

‘Having a child. Such a beautiful experience.’

Sentenced to lockdown and regarded as "non­-essential", 30 South African writers get together in a virtual Corona Collective to pen 'Lockdown ...
Books
1 year ago

How holy water revealed the 'evil' under my grandfather's roof

Author Khaya Dlanga says the #StJohnsCollege saga‚ involving a teacher found guilty of making racist comments‚ reminds him of a time while still at ...
News
4 years ago

30 seconds with Khaya Dlanga - Author of 'To Quote Myself', A Memoir

What do you credit for the success of your book beyond the genius of your writing?I don't think there was genius; I believe it's because people found ...
News
5 years ago