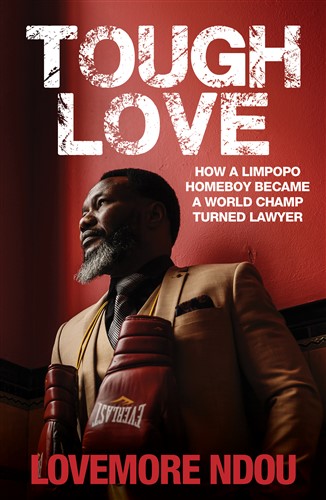 Growing up in extreme poverty in Messina (today Musina) in the early 1980s, Lovemore Ndou was forced to start fighting to protect himself, his parent and his siblings. At an early age he experienced the injustices of the apartheid system when his arm was broken during a beating in a police cell and he saw his best friend gunned down during a protest march.

After receiving his first boxing training at the gym of a local copper mine, he set off for Johannesburg to further his career. There he was exposed to some of the hard truths of the boxing world, like unscrupulous promoters who made empty promises.

Through sheer determination, he managed to stay afloat and soon the Black Panther (his name in the ring) started winning fights. When he was offered an opportunity to go boxing in Australia, he left the country in the mid-1990s and began to make a name for himself internationally. Yet again, he faced many setbacks and challenges but eventually became a triple-world champion.

A number of big names in local and international boxing circles feature in the book. Lovemore describes his awe at meeting Dingaan Thobela and Brian Mitchell, how he trained at Gerrie Coetzee’s boxing centre on the East Rand and how, in later years, he was the main sparring partner for Floyd Mayweather during a stint in the US.

Never knocked out in 64 professional bouts, Ndou transitioned from combat in the ring to confrontation in the courtroom in a successful post-boxing career as a lawyer. Today he has his own practice in Sydney, Australia.

This is an edited extract.

In my early twenties I made the decision that I was going to turn professional, no matter what it took. I knew I had the talent to become a champion, if only I was given the opportunity. But the words ‘opportunity’ and ‘black’ were rarely mentioned in the same sentence back then.

I’d witnessed too many talented black boxers fall into apartheid’s vortex and end up on the scrap heap before coming close to fulfilling their potential. There were others who became world champions only to be mercilessly ripped off and bled dry by unscrupulous promoters. If they were ‘lucky’ enough to get the chance to fight overseas, the promoter would more often than not end up siphoning off the lion’s share of the purse.

Promising white fighters, on the other hand, were spoon fed sponsorships and had promoters fawning over them in another example of the sport’s lack of equality. I knew all too well as an amateur that being black, in the eyes of referees and judges, was a cue to skewed results and perverted natural justice.

I needed to find a promoter who was essentially colour blind, and the name of legendary former South African World Heavyweight Boxing Champion, Gerrie Coetzee, kept jumping into my mind. Although I got responses from other promoters, it was Coetzee who I set my heart on. I respected the way he’d conducted himself during his boxing career. He was polite and gentle outside the ring, at odds with the beastlike presence the pasty-faced, moustachioed mauler exhibited inside the ropes. Most tellingly, he had publicly denounced racism to win the affection of many among our nation’s black majority.

In the 1980s and 1990s amateur boxing rings were largely monochromatic. Forget weight divisions, the biggest division was along racial lines: there was one for blacks, one for whites and one for coloureds (mixed races). This was despite South Africa lifting the ban on interracial fights in 1973, and legalising ‘mixed bouts’ in 1977, along with discarding the system of ‘white’ and ‘supreme’ titles.

The truth was that deep-seated beliefs and prejudices perpetuated boxing’s colour bar. Boxing clubs remained segregated and multiracial fights were studiously avoided. When they did occur a light shone brightly on apartheid’s absurdities and inequalities. I was, of course, not immune to this and had to play with the cards in front of me.

I foresaw turning professional as a pathway to a future in which South Africa, and its rotten system, would be left far behind in my rear-view mirror.

I was put in touch with a man called Jonas [note, no surname is given in the book], who was Gerrie Coetzee’s righthand man. Jonas’s lack of English language skills was matched by an obvious and glaring absence of boxing know-how, as he rambled on about his work with Gerrie’s stable of fighters, and how he’d take me to the Promised Land and make me a household name.

He explained, in his fractured lexicon, how he was a foreman in a trucking company owned by Coetzee but would be acting as my manager while Gerrie would be my promoter. None of what he said resonated, at least not in a good way.

But, at the age of twenty-two, the die was cast, the seat on the sixteenseat minibus to Johannesburg was booked. Much to my surprise, Gerrie’s Gym in Witfield on the East Rand turned out to be my less than salubrious new home. There, in this run-down suburb, situated in the equally nondescript satellite town of Boksburg, lay Gerrie’s Gym.

Once inside its sweat-soaked confines, Jonas introduced me to Jansie Coetzee, Gerrie’s brother and my new trainer, telling him he was going to turn me into a ‘Venda warrior’. There were a smattering of small dingy rooms around the back of the gym in a separate concrete block where some of the blacks that worked with Jonas in Gerrie’s trucking business resided.

Jonas, too, was headquartered there in a cramped box room that reeked of stale cigarettes and dirty laundry. He offered to share his accommodation with me, but it was so unkempt I opted instead to sleep in the gym. It became my hotel.

After training each night I’d open the windows to let the acrid stench of blood and sweat escape, set up my mattress and go to sleep. Keeping the gym clean became my part-time job. But no matter how hard I tried, the all-encompassing odour never fully dissipated.

Eventually I got to meet Gerrie Coetzee, but he was largely preoccupied overseeing the careers of his nephew and another promising Zulu fighter, Johnson Tshuma. My presence seemed to barely register with him initially. But, as time wore on, I began to accompany Johnson, my new housemate at the gym, to Gerrie’s home for weights training.

Gerrie was softy-spoken and bashful. If you quizzed him enough he’d tell you about how he became a world champion and he’d speak of his relationship with God. But he was happiest talking about his fighters, and their futures.

The fine-tuning on my transition to pro fighter was nigh, but first I had to progress through some trials, involving sparring, shadowboxing, skipping rope and other tests, to prove I was worthy under the regulations of the day.

My trainer Jansie took me to Nasrec, where the South African Boxing Board of Control was located at the time, for the trials. I was put in the ring with a series of partners, and after I’d knocked the third one out Jansie hollered at me in exasperation, ‘Lovemore, if you keep this up you’ll be sparring all day because the adjudicators aren’t bothered about your power. They want to see your boxing skills. They need to see your footwork and defensive ability.’

I was granted my licence, and my moment of truth arrived several weeks later on the undercard of a bout between the then South African middleweight champion, Johnson Tshuma, who was promoted by Gerrie, and Gerhard Botes, a tough, white boxer who had an aggressive style and always pushed forward, fast and strong. I trained like a demon for what I saw as a coming of age, a springboard to untold riches and the ability to share the fruits of my success with my family.

My preparations were interrupted and besmirched though by news on the eve of the fight of the assassination of one of my long-time heroes, Chris Hani, a freedom fighter whose idealism and realism had won my admiration. He was a leader of South Africa’s communist party and chief of staff of uMkhonto we Sizwe, the armed wing of the ANC. It was on 10 April 1993, and his life was ended, aged fifty, at the end of a gun wielded by a far-right extremist from Poland, Janusz Waluś, outside his home in Boksburg.

His death cast a pall over my debut against a tall, lean fellow novice called Enoch Khuzwayo. Distracted and demoralised, I won the bout on points, with little fanfare and minimal celebration.

My downcast demeanour wasn’t helped any by the prize money, or lack thereof. The blood, sweat, toil and sacrifice of eight years in the underworld of the amateurs was distilled into a winner’s purse of R250. Even that miserly sum dropped to R210 after I’d paid Jonas his 15 per cent manager’s fee.

As I stepped out from the ring, I ruminated over my choices. Just months earlier I’d been offered a scholarship by Venetia diamond mine, located 80 kilometres from Messina, to study mining engineering. It had presented me a future of stability and the opportunity to further my learning. Had I forsaken higher education for this? A measly R250. Was this going to be my future? A two-bit card-filler hurting another human being for peanuts. Where was the majesty and dignity in that?

Jonas put his beefy arms around me and assured me this was just my first fight, and that the only way was up. As I counted my meagre winnings, I wasn’t convinced.

Self-exiled former two weight world boxing champion Lovemore "The Black Panther" Ndou will be inducted into the Australian Boxing Hall of Fame on ...
Sport
2 years ago

Sportswriter Lloyd Burnard takes the reader on the thrilling journey of a Springbok team that went from no-hopers to world champions.
Books
1 year ago