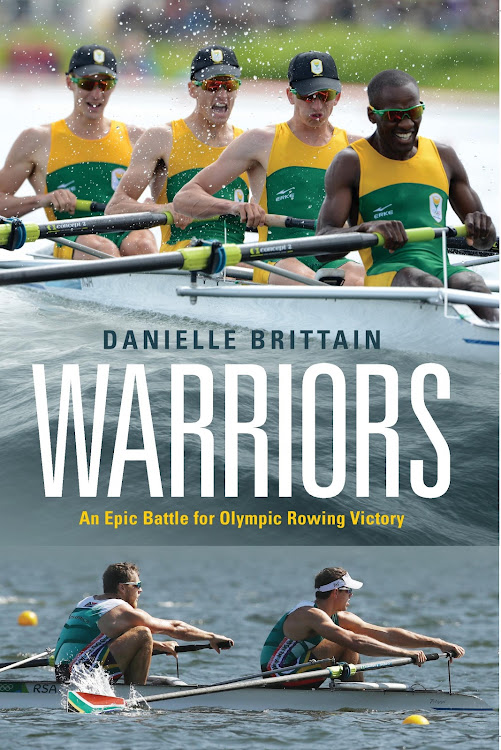 'Warriors' is a rowing story, a family story, a cancer survival story, a South African story – and the story of a mother watching it all unfold.
Image: Supplied

Danielle Brittain has walked this journey over and over again — her two sons won Olympic medals for SA in rowing, all four of her sons have rowed at top levels, and she is currently the team doctor for the SA rowing team.

Brittain has faced her own battles with cancer and then watched as her son battled Hodgkin’s lymphoma during his Olympic training, overcame it and went on to win silver after his recovery in this high-performance sport.

The Olympic wins for the SA teams at the 2012 London Olympics and 2016 Rio Olympics were iconic moments for SA and Brittain’s descriptions of what the wins meant for the individuals in the teams, their families, the coaching staff and ordinary South Africans demonstrates the power of sport to unite the country.

A rowing story, a family story, a cancer survival story, an SA story — and the story of a mother watching it all unfold.

When I began this story, I thought I would be writing about my son, who had cancer, and how he fought to race at the Olympic Games. I was at the Rio Olympic Games when the idea of writing the story entered my head. I was right, but I was also wrong. I was right because my son, Lawrence Brittain, had been diagnosed with Stage 4 Hodgkin's lymphoma. To be told you have fourth-stage cancer is without doubt one of the most devastating diagnoses for anyone, but for a young athlete preparing to take on the world it was especially hard. Yet the diagnosis gave meaning to why things had been going badly for him from a performance point of view. I wanted to write his story because it was both extraordinary and inspirational as he battled his way through deteriorating performance, diagnosis and treatment. His story is about fighting on, despite hardships and setbacks. His story is about believing and never giving up. As his mother and the doctor to the SA rowing team, I felt compelled to write it. I was wrong because the story is so much more than that. In his story are other stories. His family, his brothers, the lightweight four Olympic gold medal, SA rowing. The stories unfold themselves. I was wrong because this story is, in essence, my story. It is a large part of my journey and how I became the mother of four extraordinary sons. When I started writing, I thought this was a warrior’s story. Again, I was both right and wrong. It is a warrior’s story. But not one warrior. It is about warriors, that dogged and tenacious spirit in all of us. The warrior who fights on and never gives up. This is how it all happened.

‘There are great lessons to be learnt in pushing ourselves, physically and mentally, to the edge’.

On 2 August 2012, a mild summer’s day with some wind and some cloud, the SA men’s lightweight four rowing team lined up at the start on Lake Dorney in Eton, England. They were ready to fight the race of their lives, the final of the Lightweight Four at the London Olympic Games. In that boat was my eldest son, Matthew Brittain. On the grandstand watching their brother, shouting and screaming their support, willing him on, wishing that their deep and heartfelt roars could propel him faster, were his three younger brothers Lawrence, James and Charles. Lawrence had failed to qualify for the SA heavyweight men’s pair for the London Olympics, suffering a brutal defeat at the Olympic Qualification World Championship Regatta the year before and an equally gutting defeat at the more recent Late Qualification Regatta in Lucerne, Switzerland.

As a consequence, Lawrence did not make it to the 2012 Olympics and was relegated instead to the grandstand where he bravely and resolutely supported his brother as he waved the SA flag, secretly wishing he was representing SA and himself at the level of which he knew he was capable.

SA national coach Roger Barrow sent me a message during the competition: ‘I am upset Lawrence is not racing here. He should be racing. It must be so tough for him watching this. He will race at the Olympics one day as he is so good. Trust me on this.’ I believed the disappointment would make him stronger and more determined. It did. But it did not happen immediately. Lawrence still had a journey ahead of him and he had to sink a lot lower before he could show the world what he could become. At that time, unbeknown to us, for some deeply inexplicable reason Lawrence’s body was changing. His lymphoid cells had begun their oncological change under a mysterious and potentially deadly challenge, silently invading and destroying as they began their stealthy journey to discovery.

Alicia Enslin, Matthew’s girlfriend, had come to the Olympics to support him. All the partners of the lightweight four had come, donning special supporter T-shirts they’d had made. Alicia had walked the path with him, slowly building her understanding of this Olympic enigma. She stood with us, the tension pumping around her, watching the racing, screaming out her support, urging Matthew and his crew on. I stood with my husband David, my father Bertie, and the SA supporters, tension and excitement surging as the race unfolded before us. For the world’s top lightweight crews who faced the biggest six minutes of their lives, this was the moment they had spent years working and striving for. Their Olympic dream was about to become reality.

I knew all too well as an amateur that being black, in the eyes of referees and judges, was a cue to skewed results and perverted natural justice.
Books
5 months ago

This idea of being other, of not quite belonging anywhere yet belonging everywhere is now a source of pride.
Books
8 months ago