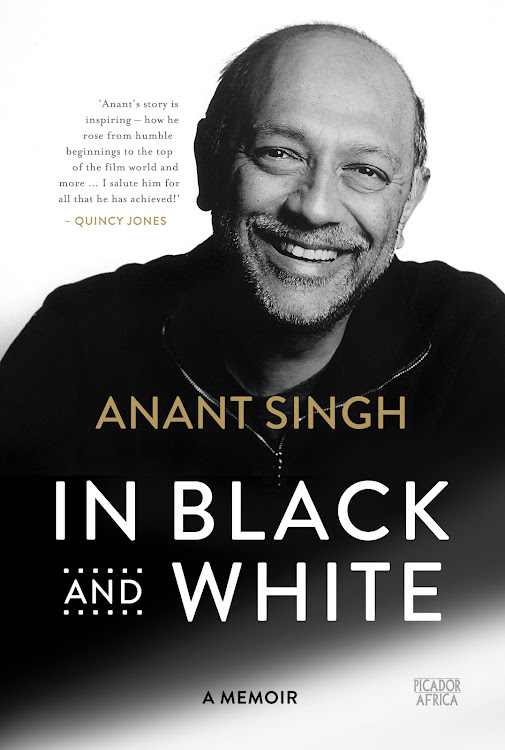 ‘Anant’s story is inspiring — how he rose from humble beginnings to the top of the film world and more ... I salute him for all that he has achieved!’ — QUINCY JONES

‘Never boring, never pedantic nor boastful, often witty, In Black and White is an electrifying account of the passion, hard work and dedication — and the audacity — that has made Anant Singh SA’s most celebrated and successful filmmaker, both locally and internationally.’ — BARBARA HOGAN

Anant Singh’s journey with film began with Charlie Chaplin, flickering in black and white on a makeshift screen in the family’s modest home in Springfield, Durban. Later he rewound 16mm reels in a film rental store in Durban, and before his twentieth birthday, he was the owner of that store and in a business in which no person of colour had ventured. By hiring out films classified for whites only to all races and uncensored movies to anyone who wanted to watch them, Singh was arrested for breaking the laws he refused to recognise as legitimate. He moved on to wider distribution, first to cinemas across Africa and then to the international market, to setting up Videovision Enterprises, and finally to putting his heart and soul into producing award-winning and important films.

Today he is recognised as SA’s pre-eminent film producer, having produced more than 100 films over four decades, from the mid-1980s to the present. Some of these include Place of Weeping, The Stick, Cry, the Beloved Country, Sarafina!, the Aids-awareness film Yesterday (SA’s first Oscar-nominated film) and, in 2013, the multi-award-winning Mandela: Long Walk to Freedom.

This extraordinary memoir is a story of professional relationships and of friendships with mentors, including Ahmed Kathrada, Fatima and Ismail Meer and Nelson Mandela, as well as with superstars. And it is a testament to determination, courage and perseverance — to speak up and speak out through the powerful medium of film.

Singh says: “Writing a book is challenging. I constantly questioned if it would be of interest to people. I have tried to give readers an insight into a difficult and complex industry, and a glimpse into my life, which from the outside is often considered to be glamorous and sexy. The reality is different, but through failure and success, I love what I do. I am humbled that Pan Macmillan found merit to publish the book.”

Terry Morris, MD of Pan Macmillan SA, says: “In Black and White is an inspiring story told with Anant's signature charm and wit. Pan Macmillan is proud to publish Anant's memoir, with his heart warming and tender stories of growing up in Durban, his grit and tenacity in dealing with apartheid obstacles that threatened to dampen his entrepreneurial spirit, and also his celebration and love for the film industry, which, in turn, has helped to establish him as a South African icon.”

Filmmaker Anant Singh's latest release is not like any of his previous works.
News
1 year ago

Despite some negative reviews, Anant Singh is proud of his film tribute to Madiba. He tells Carlos Amato of the 16 years of effort that went into ...
Lifestyle
8 years ago

Jo Nesbo's latest riveting read, a story of survival set in Nigeria, and a much-needed book about menopause for all women.
Books
6 months ago