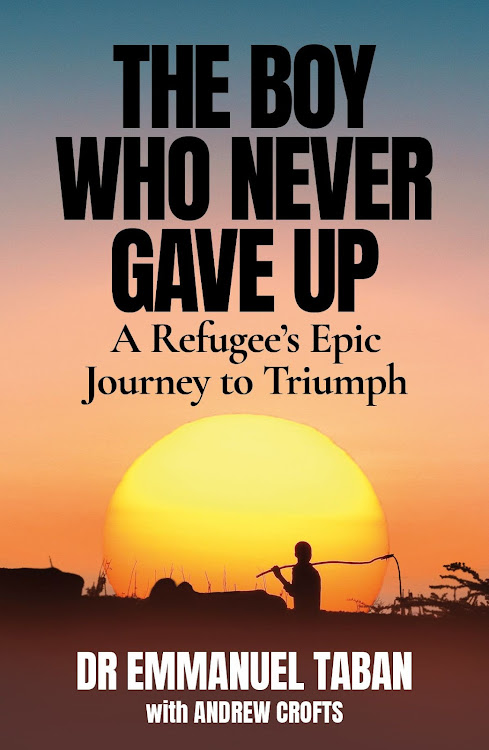 By never giving up, Emmanuel Taban rose above extreme poverty, racism and xenophobia to become a SA legend.
Image: Supplied

The Boy Who Never Gave Up: A Refugee’s Epic Journey to Triumph

Emmanuel Taban was born into rural poverty in South Sudan, one of Africa’s most deprived regions, though richly endowed with natural resources. His schooling, which he loved, was disrupted over and over again by civil unrest, and in 1994, at the age of 16, having been arrested on suspicion of being a spy and forced to convert from Christianity to Islam, he escaped. Attempting to get home to Juba, he took a wrong turning and crossed the border into Eritrea, and started an extraordinary 18-month journey to SA.

He had no way of contacting his beloved mother, who didn’t know if he was alive or dead, and had to battle against brutal thugs, scammers, violent police officers, snakes and hippos. He had to backtrack and find other routes in what was an epic journey, and the tale of which makes for compelling reading.

Often forced to rely on the kindness of strangers, including missionaries of the Catholic church who come out of this book as heroes, Taban also learned lessons in self-reliance and a powerful work ethic.

Once he arrived in SA, again the Catholic fathers helped him to realise his burning ambition to continue his disrupted education. Eventually he was accepted by Medunsa, and despite poverty and prejudice, he qualified as a doctor, finally becoming a well-respected specialist pulmonologist and working on the frontline during the Covid-19 pandemic.

The telling of his story is straightforward and factual, and while Taban may not always be a comfortable companion, he is a compelling one.

Despite many instances of his being treated badly in SA, he directs most of his anger and scorn at his homeland. He has been determined to give back to South Sudan, and has put a huge amount of effort and money into trying to assist that poor and struggling country, but he has been thwarted at every turn by greed, inertia and corruption. It is a sobering view of the African continent, and a timely one.

Dr Emmanuel Taban, a pulmonologist at Mediclinic Midstream in Midrand, says that two out of every three patients being admitted to the hospital were ...
News
4 months ago

Emmanuel Taban is no ordinary doctor — he went on to become a leading pulmonologist who pioneered the use of therapeutic bronchoscopies to treat ...
Opinion & Analysis
6 months ago

In 1994,16-year-old Emmanuel Taban walked out of war-ravaged Sudan with nothing and nowhere to go. He made a long and harrowing journey to SA.
Books
8 months ago