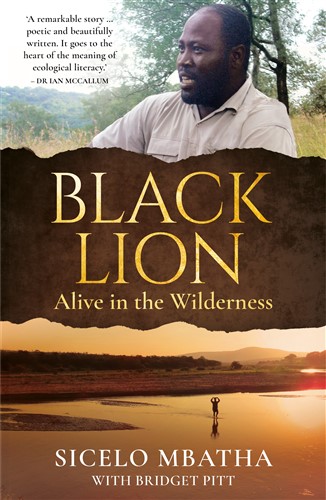 'Black Lion' includes extraordinary tales of growing up in and coming to understand the African wilderness.
Image: Supplied

Black Lion begins in rural SA where a deeply traumatic childhood experience — he witnessed his cousin being dragged away by a crocodile — should have turned Mbatha against the surrounding wilderness. Instead, he was irresistibly drawn to it. As a volunteer at Imfolozi Nature Reserve, close encounters with buffalo, lion, elephant and other animals taught him to “see” with his heart and thus began a spiritual awakening.

Drawing from his Zulu culture and his own yearning to better understand humans’ relationship to nature, Mbatha has forged a new path, disrupting the conventional approach to nature with an immersive, respectful and transformative way of being in the wilderness. Both memoir and philosophical reflection, Black Lion — co-written with environmentalist Bridget Pitt — is his brilliant and profound account of life as a wilderness spiritual guide.

As humanity hurtles into the anthropogenic 21st century, Black Lion is an urgent reminder of just how much we need the wilderness for our emotional and spiritual survival.

Extract: The fighting for a tree

A few weeks after my sixth birthday, I found myself in a school classroom for the first time. After running wild like a young colt with only my goats and the hills for company, I found it shocking to be stuck in a room full of human kids for hours. We ended our first day with a dance while the teacher played a guitar, which lifted my spirits a little.

The daily journey of 14km there and 14km back was onerous for a six-year-old child. But Sanele encouraged me, and helped awaken my senses to the natural beauty along the way. In the early mornings, we would walk through the flowering trees, the air rich with the scent of the white flowers of the black monkey thorn or the sweet, red flowers of the weeping boer bean. Our music was the singing of the waterfalls, and the staccato calls of the bleating warblers in the thick, gold grass. We marvelled at the colours of the rocks, so bright under the clear, rushing water of the rivers.

Sanele helped me to find the best wild fruits to sustain us on the journey. The trees were truly our fathers and mothers along the way, giving us sustenance, and welcome shade on the blazing summer days, or shelter from the hard rains. Our hearts were uplifted by the majestic fig trees, and by the umbrella thorns that seemed to smile at us from distant hills, their arms thrown wide to welcome tired travellers and offer generous shade under their broad canopies.

But the queen of the trees was a great umbrella thorn that grew on top of a high hill near the school. The tree could be seen for miles around, and always seemed to encourage us as we made the long, hot trek up the hill towards it. When we reached it at last, we would flop down under its generous branches, grateful for the cool shade refreshing us for the rest of the journey. Often other weary travellers would be resting there, laying down their bundles of firewood or maize cobs to enjoy a few minutes in the shade.

One day, as we came up the hill, we could not see the familiar shape of the umbrella thorn. We hurried up the path, disbelieving our eyes, hoping it was some trick of the light and that the tree would be there as usual. But as we drew near the spot, we could smell fresh sap. We stood in stunned silence, gazing at the stump bleeding out its sap into the grey soil. The gold flowers lay strewn across the ground among the broken branches, while bees and butterflies fluttered about gathering the last scraps of pollen and nectar from the dying blooms. As I laid my hand on the wounded stump, a river of tears poured down my face.

A gust of wind sent the fallen leaves swirling around the stump as if to embrace the dying soul of the tree. I felt lost and bewildered, consumed by emptiness. How could something so meaningful be cut down so carelessly? How could something so generous be violated so cruelly? I felt as if I too had been struck down and violated. The bright memories of the stories we had shared under this tree flooded my mind. I’d only been attending school for a few months, but the tree had already brought me such comfort. In the way of small children who have witnessed little change, I had assumed it would be there forever, that one day my kids would sit under this tree, listening to me sharing the stories of my life. But the tree had been murdered, and the place was enveloped in sorrow.

As we recovered from our first feelings of shock and disbelief, we children were galvanised by our anger, given courage to protest by the strength of our grief. Led by Sanele, we launched a peaceful ‘protest’ by writing messages saying things such as The trees are us, who killed this tree? We wrote these on rocks near gathering places, at river crossings, at the communal bathing places in the river for males and for females. Many of our parents were illiterate, but we knew that these messages would provoke their curiosity and they would ask us the meaning of them. Other kids joined us and the campaign grew, with messages appearing all over the area. This action showed the village that we kids were committed to protecting nature from thoughtless destruction, that for us the trees were like parents, giving us fruits every lunchtime at school and sheltering us from the sun and rain. Our attachment to trees, rocks and grass kindled a spark of caring for the land itself, opened our ears to the voices of nature and urged us to harvest its spiritual benefits.

Our protests reawakened the dulled feelings for nature in our mothers, fathers and traditional leaders. It helped to revive their appreciation of natural beauty in our villages, to rekindle their delight in our trees and the streams with their small pools and tiny fish, the scent of the wild ginger bushes and wild basil. It reminded the villagers that, through all the hardships they endured, the natural features around us enhanced our lives and were true symbols of perfection. In response to our protest, traditional leaders laid down a law that all trees along the paths must be protected because of what they provide to kids walking to school and other travellers. The tree had been cut down by a man who had spent some years in jail. At the time, I thought he was just an evil man, but looking back now I wonder whether those years in a hard place had so disconnected him from nature and his home that he had forgotten the trees’ worth.

Through this victory I celebrated the empowerment of my connection with nature, the true freedom that comes with this connection. I drank in the life of the dying tree as if drinking from a stream with shimmering waters, and so I became its voice.

In an extract from Safari Nation, his social history of the Kruger National Park,  Jacob Dlamini writes about the  politics and prejudices at play in ...
Opinion & Analysis
1 year ago

"... And it was literally like something hit us between the eyeballs. That was it. We stopped travelling internationally, it was just about being in ...
Books
10 months ago

Peter Pickford on writing 'To the Edges of the Earth'

To have the opportunity to stand by oneself, without distraction, and drink in how exceptional the Earth is, is a rare privilege.
Books
10 months ago