‘The Penguin Post’: Lifting the lid on 200 years of electoral dysfunction

Relying on fascinating (and often hilarious) newspaper clippings, diary entries, political posters and parliamentary records, Matthew Blackman and Nick Dall's ‘Spoilt Ballots: The Elections that Shaped South Africa, from Shaka to Cyril’ tells the story of SA’s long road to democracy and how it has repeatedly forked off. 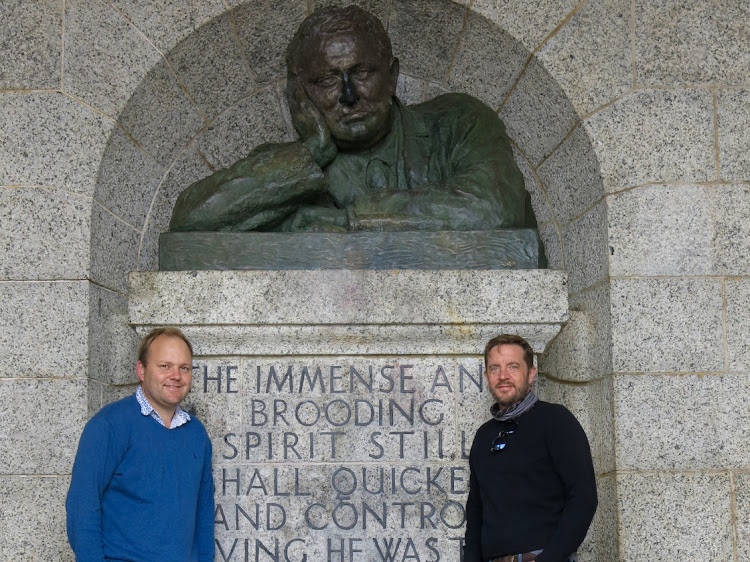 “Most South Africans would agree, the country’s political landscape currently looks like the morning after the jackal found its way into the Nkandla chicken run. The immediate reasons for this are of course that Cyril seems incapable of separating the bad eggs from the good, that Helen is more interested in breaking the eggs than making the omelette, that Julius is obsessed with counting his eggs, and that Jacob is still feathering his own nest almost five years after being knocked off his perch.

This was not how South Africa was meant to emerge from the centuries-long battle for a democratic and free society. The rainbow chicken was meant to leap free and ranging into an ordered democratic state. Instead, a beer-battered and sickly bird emerged whose sorry state has far more to do with its long history of incarcerations, assaults, and battery than most people credit.

Spoilt Ballots spills the beans on just how the history of democracy and elections shaped our South Africa, showing that ‘we the people’ are at least partly to blame for the mess we find ourselves in. It is seldom acknowledged that even our vilest leaders drew their power from the (mostly white) people who voted for them. As a survey in The Star in 1975 revealed, 87 per cent of the white population believed that Nazi sympathiser President B.J. Vorster was doing a ‘good’ or ‘excellent’ job. 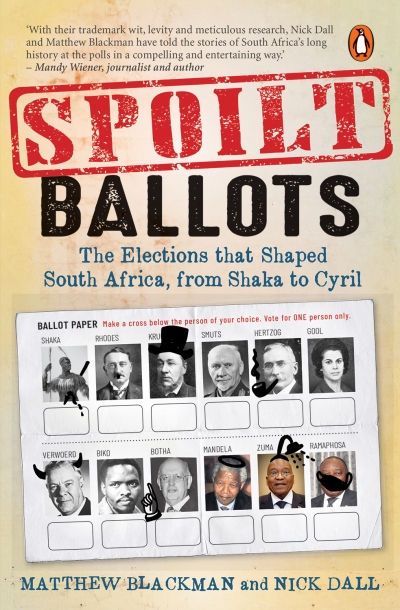 Spoilt Ballots begins by outlining how, after the assassination of Shaka Zulu, collective decision-making about a change of leadership shaped the new Zulu nation (leaving a few corpses floating in a Midlands brook). It then follows the story of those visionary white men in the Cape colony who fought tirelessly for a non-racial voting system…in 1854! But this non-racial swallow did not a summer make. Instead, all the good eggs in this democratic handbasket went to hell with the emergence in Cape politics of Cecil John Rhodes who proved that ‘every man has his price’ with perhaps the most corrupt election in our history in 1898.

The story of South Africa could of course not ignore the apartheid albatross hanging about its neck. And although our policy of ‘good neighbourliness’ may have begun with Afrikaner Nationalism, Spoilt Ballots shows just how the founders of ‘grand apartheid’, H.F. Verwoerd and B.J. Vorster, managed jolly well to dovetail their beliefs with the preferences of the English-speaking electorate.

Eventually P.W. Botha and F.W. de Klerk, despite their deeply racist inclinations realised that grand apartheid was going the way of the dodo.

As sanctions and political violence heated up in the 1980s, P.W. placed his crocodile claw in the waters of the Rubicon and found them not to his liking. His attempts to rejig apartheid were scuppered when coloured and Indian South Africans voted with their feet by staying away from the polls.

A few years later, with the country in a state of collapse and the moral force of Nelson Mandela perching on his shoulder, F.W. took the democratic dive. The ideal which Madiba had been prepared to die for, was suddenly a reality. On 27 April 1994, millions of black South Africans made their mark for the first time, ushering in what we all hoped would be the pot of democratic gold at the end of the rainbow.

But as our newly hatched – and nearly poached – nation finally stretched its wings, a new (but entirely familiar) politics of confusion and corruption surfaced under the ANC. Not for the first time in our history, the ruling party’s internal squabbles and elections took precedence over the will of the people, and now, nearly three decades into the democratic project, the country’s politics are currently as confused as ever.

As Mandy Wiener said after reading the book, ‘elections are serious business. They are the most profound, defining action of a democracy, deciding power and leadership.”

This article was originally published in The Penguin Post, a magazine about books for book lovers from Penguin Random House South Africa.

Dube, Gandhi and how Phoenix was once the poster child for nonviolence

That Phoenix became infamous in July for the violence that erupted there is ironc and tragic in light of the area's early history, writes Matthew ...
Opinion & Analysis
6 months ago

The Foulest Cape: A tour of SA’s most scandalous places

Researching 350 years of corruption in SA, Nick Dall was struck by how many Cape attractions have been at the centre of our biggest scandals
Lifestyle
4 months ago

Déjà vu at the Zondo show: Saxonwold shebeen’s many predecessors

Judge Raymond Zondo is certainly not the first to take charge of a commission into state capture in SA. Matthew Blackman and Nick Dalldelve into some ...
Opinion & Analysis
1 year ago