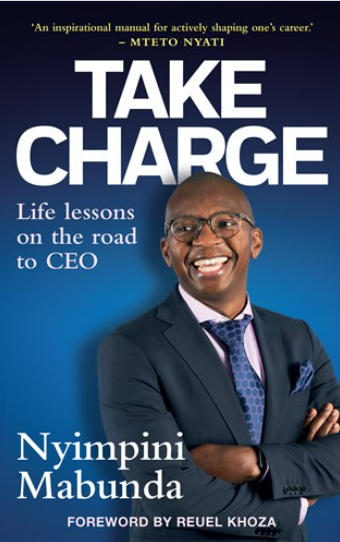 'Take Charge' is your toolkit to take it to the top.
Image: Supplied

“I believe there are many potential senior leaders out there who simply lack the self-belief and toolkit to begin their own journey to the top. There are, as they say, many ways to skin a cat.”

Join Nyimpini Mabunda on his journey from his childhood in an apartheid-era homeland to the CEO’s office at one of the world’s leading businesses.

In a career spanning Procter & Gamble, Nando’s, Diageo and Vodacom in SA, the UK and Uganda, Mabunda actively sets out to always improve his business acumen and leadership skills.

Constantly in learning mode and infused with positive energy, Mabunda’s path offers insightful lessons and practical advice for anyone who wants to succeed in their career, build and lead a business.

This is your toolkit to take you the top.

Looking back at growing up in Rolle, with no running water or electricity, and studying at Daniye, with no actual classrooms, under teachers who were trying their best, I think the lesson I was really learning was that allowing an underprivileged upbringing to affect our confidence in our ability to compete is a mistake.

Kenyan athletes without fancy sports shoes, professional trainers or advanced facilities frequently beat the rest of the world’s runners. From this it is important to learn that, as difficult as our circumstances may be, we cannot use that to justify lagging.

Today my children are very privileged, able to attend some of the finest private schools in South Africa. Again, to illustrate the point, there is a school in the Vembe district of Limpopo — a public school with very basic facilities and no school fees — which is consistently one of the top schools in the country, based on matric results.

I believe nobody should be intimidated by external factors or apparent limitations. We should give ourselves permission to compete despite an unequal footing.

That said, I was not at the bottom of the pyramid. The truth is I grew up relatively privileged in the context of the Bantustan. I was born to a mother who was a schoolteacher, earning a monthly income from the government. My father was also employed by the government as a health inspector, so he too was bringing home a monthly income.

Living in a household with educated parents who were not caught up in the migrant labour system afforded me a relatively normal life and the benefit of parental guidance. My privilege went beyond being a middle-class family in a homeland under apartheid — my parents decided to start a business. From 1978 they ran a retail outlet selling groceries and fast foods, and by 1988 the business had grown to include a hardware shop, a clothing shop and a butchery. Business was good and we were living well. The first 10 years of my life were incredibly inspirational as our family thrived along with the business.

I was comfortable, but I worked hard on a variety of fronts from a very young age. I worked as a shop assistant from when I was old enough, which is in keeping with the entrepreneurial tendency to maintain family oversight of the business. We siblings were allocated roles, like working the tills, as a form of financial control.

If we weren’t old enough to handle the till points, we’d be picking and replenishing stock at the counter service to ensure that daily stock counts balanced. By the age of 12 I was driving a Toyota Stout 4x4 to deliver building materials like cement, doors and window frames to customers. I didn’t have a licence, but that didn’t matter to anyone.

My dad had grown his work portfolio and became a homeland politician, elected as a MP for our region. He was also made speaker of the Cabinet, and in that role grew close to the Chief Minister of Gazankulu, Professor Hudson Ntsanwisi. The chief minister would come and visit our home in Rolle and spend hours with us, so we grew up knowing him as a family friend. I was inspired by this highly educated, charismatic leader, who was also accessible.

I was motivated by my father’s practical and sensible use of his savings to start a business, expand it and then become a community leader. He worked hard and involved us in the business from the beginning, though he never allowed that to be a reason for our slipping up with our schoolwork. We should succeed in both our schoolwork and involvement in the business, he said, which taught me that we always have more capacity than we give ourselves credit for.

We can do a lot more with the time we have if we are disciplined and make a few sacrifices along the way — especially those things that may derail us from our intended course. From a young age I was learning to be involved in multiple enterprises at once, and to persist in juggling them through hard work.

So I grew up in business and I believe it is in my blood. So is winning. But that had to start somewhere.

I was naturally inclined to love learning. As the son of a teacher, my mother’s passion for education was infectious. She had the patience for the vocation and her great talent was to build others — including me and my siblings.

She too worked hard, first completing every workday as a teacher and then going to help run the business after hours. I tended to be by her side, wherever she went. The apron strings were strong because I would accompany my mother to school from the age of two, sitting in her office and playing while she taught. I refused to be left at home, crying until she relented.

This went on until I turned four, when one of the teachers decided to take me into her class with other kids who were years older. I began participating in the schoolwork and enjoyed myself, doing well enough to pass the assessments comfortably. I was kept in the class and that’s how I ended up matriculating at the age of 15, starting university before my 16th birthday.

As much as I advocate for hard work, there is a lot to be said for chance and using the opportunities that present themselves — seizing the moment. There are times in our lives when things just happen. They come our way unexpectedly and we must learn to take advantage of them.

When I once asked a CEO how he had made it to the top of the ladder, seeking advice about how I could do the same, he told me that, aside from financial acumen, there were five qualities he believed an individual needed to possess to be a business leader: a strategic mind, a high-functioning intellect, emotional intelligence, great stakeholder management and the ability to mobilise support. Still, these would not guarantee passage to the C-suite, he said, because the essential ingredient is luck. He reminded me that many people have talent and potential, but with so few CEO roles available, only one out of  thousands of employees within a large organisation can be CEO at any one time, for example. Some luck is necessary.

This happened at Old Mutual in 2020, as the candidate who was not preferred initially was in line when the newly appointed CEO fell out with the board barely 18 months into the job. When the board asked the COO to step in while they searched for a successor, he did such a good job at stabilising the business and delivering results that there was no reason not to elevate him to the CEO role permanently.

Positioning is a crucial skill in building a career and it is the prerequisite for luck. Find yourself, by design, in the right places so that when things happen, they come your way. Then grasp the opportunity.

I have watched many a black leader be too humble to take advantage of the situation facing them. Fears of being viewed as the beneficiary of nepotism or employment equity policy can be particularly troublesome, even as the children of successful leaders — who have been mentored by their parents to become skilled leaders themselves — of other races are moving through the ranks.

All parents do what they can. They leverage networks, make phone calls, open doors. Leverage what you have, and don’t worry so much about perception.

"I wanted to inspire and motivate people"
Books
1 month ago

Now 25 years old, Exclusive Books Homebru 2022 is a mirror and a window into SA, where we are, where we have been and where we can go.
Books
2 months ago

Snuggle up with winter reads from Exclusive Books

Exclusive Books has warming reads of fiction, non-fiction, young adult and children’s titles on its recommended reading list for June.
Books
1 month ago