‘I think about Eskom every day. Why don’t you?’ — author of ‘Sabotage’

Recognising that the power utility poses a singular threat to SA is vital to our future, writes Kyle Cowan, investigative journalist at News24 and author of ‘Sabotage: Eskom Under Siege’. 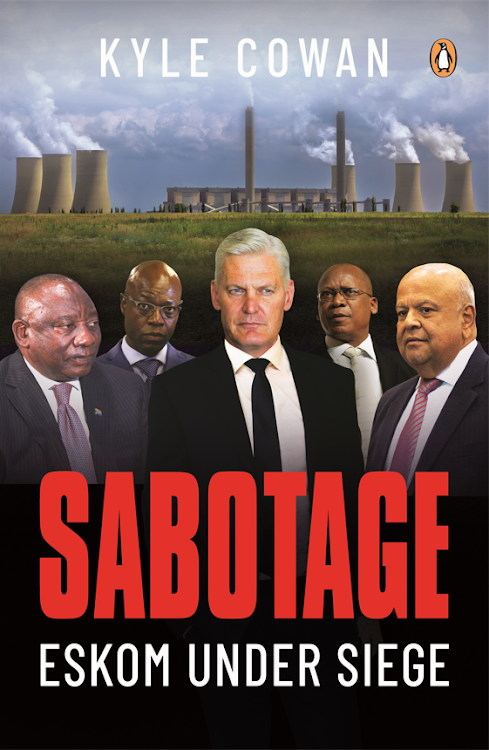 'Sabotage' is a story of conspiracy and subterfuge at SA’s ailing power utility.
Image: Supplied

This article was originally published in The Penguin Post, a magazine about books for book lovers from Penguin Random House SA

I can't stop thinking about Eskom. My family calls me obsessive and, arguably, they have a point. I have spent more than a year investigating key aspects of the electricity company as part of my work for News24 — work that continues — and have just written a book about the place.

I can almost hear the groans and feel the sharp rebuke of you rolling your eyes as you read this. Yes, it’s all desperately unexciting. The only time South Africans really care about Eskom is when the latest round of load-shedding hits, and you are stuck trying to boil water on a small, one-plate gas stove as candles stutter because you forgot to charge the LED camping lantern.

The terrible truth is that load-shedding, while inconvenient to us living in the ‘burbs, is not just annoying; it's damaging to our economy. And away from the suburbs, where spotlights keep some of the worst criminals at bay, it creates a far worse problem — for in the darkness, malcontent gains confidence.

Yet this fails to impart the terrible truth. We experience it tangibly, but load-shedding is a symptom; a physical manifestation of the cancer that has eaten away at the heart of Eskom. Corruption, greed and incompetence have hollowed out Eskom’s capacity to keep power stations running well. A lack of money, a failure to start building new power stations early enough and a distinct lack of urgency around this problem have exacerbated the crisis.

Many words are spoken by our leaders in aid of soothing our ever-increasing frustration. But little progress is made. As I write this, it is April 11 2022, and a few hours ago, a unit tripped at Medupi power station plunging the country into stage two load-shedding. One unit going offline pushed us over the edge. Others had broken down earlier and more units still were late in coming back online after outages for repairs. A staggering 15,000 megawatts of generation capacity was a result of unplanned breakdowns.

Our political elite are not focusing on Eskom

I know this because Eskom keeps us in the loop on its struggles. The current leadership has realised that being open and honest about their problems goes a long way to quelling our discontent. It should not be this way.

We should think and write about Eskom only seldom, because electricity is so ingrained in our way of life, that it should be a given. Yet we know about the troubles of Medupi, Tutuka and Camden power stations because we deserve an explanation when the power goes out.

In Sabotage, I argue that Eskom should be the first thing our leaders think of in the morning and the last thing that crosses their minds before bed. I dedicate much of my writing to the efforts at cleaning up and fixing the problems, and I still get the feeling that beyond the thousands of dedicated Eskom staff who perform miracles daily, our political elite are not focusing on Eskom enough.

What greater danger exists to peace and security in SA, than an electricity company that struggles to generate electricity? Unfortunately, without fixing Eskom or providing an immediate, viable alternative, we are in immediate and ever-present danger as SA Inc.

Sabotage, published by Penguin Random House, is out now.

In May 2022, evidence emerged of sabotage at three Eskom power stations.
Books
2 months ago

LETTER | Dear Eskom, one day striking workers will be the least of your problems

There will come a day when you won't have to face striking workers, but the people of SA.
Ideas
1 month ago