EXTRACT | 'Bassie: My Journey of Hope' by Basetsana Kumalo 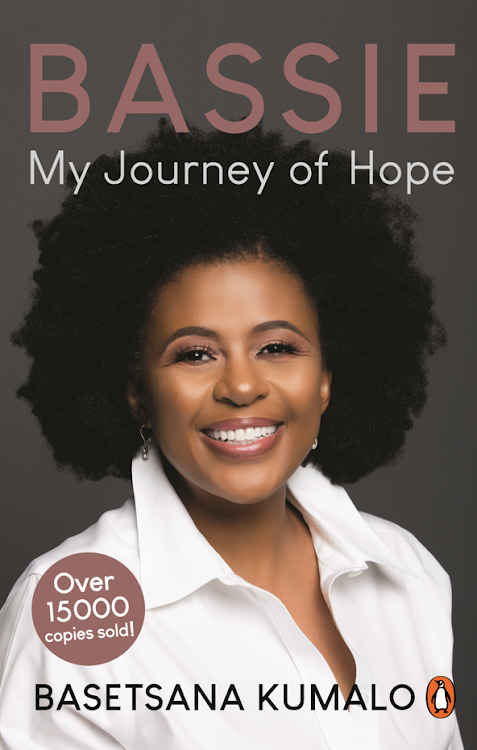 'Bassie: My Journey of Hope' is now available in paperback.
Image: Supplied

Basetsana Kumalo shot to fame as Miss SA in 1994 and soon became the face of SA’s new democracy. As the first black presenter of the glamorous lifestyle TV show Top Billing, she travelled the world and interviewed legends such as Oprah Winfrey, Michael Jackson and Luther Vandross.

After a successful career in front of the camera, Kumalo’s drive and ambition took her into the world of business and entrepreneurship. The street savvy that her entrepreneurial mother bestowed on her as a child stood her in good stead as she built a media empire.

In Bassie: My Journey of Hope, Kumalo recounts her life journey, including her relationships with mentors such as Nelson Mandela. She also shares the secrets of her success and the lessons she’s learnt along the way. She opens up about the pressures of her high-profile marriage to Romeo Kumalo and their heartbreaking struggle to have a family. She talks honestly about motherhood and maintaining a healthy work/life balance, and unpacks how she pays it forward through mentoring young people she has met.

Kumalo describes the legal battles she has had to wage to protect her name and her brand over the years. She gives a chilling account of the stalker who has harassed her for decades, and the spurious “sex-tape” allegation that rocked her family and almost destroyed her career. Her enthusiasm, humour and hope infuses every page of the memoir, making it an intimate, inspiring and entertaining account of a remarkable life.

In 1994, I was a twenty-year-old student at university. I had become active in campus politics and had been elected president of the Central Cultural Committee. I would say I was having a normal student life with lots of new friends and a very busy study schedule. I was definitely not concerned about the fact that Miss South Africa was a few months away.

The student body had been excited when I qualified by winning Miss Northern Transvaal, and they had absolutely claimed the title for themselves. I would often be accosted by fellow students who seemed more excited about the whole thing than I was. They would wish me luck and tell me to “bring it home”.

There was so much happening in the country that year too. The first democratic general election was held in April 1994, and I was old enough to vote! It was one of the most emotional moments of my life. As I reached the front of the line and walked into the voting booth with my ballot paper, I thought, ‘This is me, little Basetsana Makgalemele, a black child from the ghetto, and I have been given the opportunity to make my mark on the future of our country.’ I walked towards the ballot box, tears streaming down my face, and paused for a moment before casting my vote. I looked at the people around me, who were also feeling the importance of this day, many of them still incredulous that they were actually able to vote in their lifetime.

In September, the ten finalists (nine provinces, plus Miss Soweto) were brought up to Johannesburg to prepare for the pageant. We each got a roomie. It felt like we were all at boarding school, a really fun boarding school with a lot of people around us who made us pretty every day and who gave us nice clothes. I was twenty years old and I’d led a very sheltered existence. My mom was very strict. Besides not allowing us to play in the streets, she was also anti friends. ‘Friends will not do anything for you,’ she would say. ‘You’ve got siblings. If you want to play, go and play with them in the yard.’ My mother didn’t suffer fools, as I’ve said, and you really didn’t take chances with her.

So now I was hanging out with all these really nice girls. You might think there would be jealousy and cattiness, but there was really nothing like that. They were fantastic girls. I’m still friends with some of them, and they’ve gone on to do some amazing things with their lives — some of them are doctors and lawyers.

All the races were represented. Before 1992, very few women of colour had successfully managed to enter Miss South Africa. Newsreader Sibongile Sokhulu was among the first, and she made it to the top twelve in 1987. Other finalists before 1992 were Robyn Poole, Shawn Coutries and Sandy Ngema. Now, we came from all over the country and from different backgrounds. We were truly the rainbow nation that Madiba spoke about and wanted for his people. For the first time, I actually felt the rainbow nation, it was tangible, I experienced it first-hand, I knew what it tasted like. Yes, we came from different worlds, but at the end of the day, we all had one thing in common, the pageant. We all wanted to change our lives, and we believed that the pageant would give us that opportunity.

That time of preparation was loads of fun. The media interviewed us, we were on television, there was a Miss South Africa bus, and we were taken around to different centres and towns. Wherever we went, people would go crazy.

A week before the pageant, we went to Sun City to go through all the drills and be put through our paces to prepare for the final. Sun City is a luxury hotel resort and casino situated in the North West province, about two hours’ drive from Johannesburg. It was developed by hotel magnate Sol Kerzner as part of his Sun International group of leisure properties, and officially opened its doors in 1979. I had heard about it, but I had never imagined in my wildest dreams that I would stay there one day. I had no idea how spectacular it was, with its grand entrance halls and luxury furnishings. I had also never been to a casino before, so you can imagine my excitement when I first saw the bright lights and heard the loud electronic slot machines. I was totally bowled over. It was a completely new world.

Finalists were closely guarded and totally secluded, with security all around. Closer to the pageant night, you were not even allowed to speak to your family. The final was to be held in the Sun City Superbowl. The grand conference and concert venue is enormous, with seating capacity for 6,000 people. The organisers had created the most magnificent stage and the production itself was world-class. Top clothing designers like The Boys, Julian, Errol Arendz and Dicky Longhurst had been commissioned to make our garments, which were absolutely stunning. It was obvious that no expense had been spared in making the experience unforgettable.

The day of the pageant started with a communal breakfast, which was immediately followed by a final rehearsal, where each girl had to practise receiving the crown if her name was called out that night. That was followed by many hours of make-up and hair.

There was a great deal of commotion backstage as we prepared to take part in the biggest spectacle of our lives. We each had someone to help us with costume changes, and our beautiful garments were labelled in order to avoid mix-ups.

The pageant itself went by so fast. One minute we were preparing for the swimsuit segment, and the next it was time for me to change into my pink satin gown, bedecked with Swarovski crystals, and return to the stage for the moment of truth!

Then I heard my name. Basetsana Makgalemele. I was being announced as Miss South Africa 1994. I don’t think it dawned on me immediately that I had actually won the crown. There was this moment of utter shock rather than disbelief. I don’t think I could process it, or even understand what it all meant. And then I heard Prince singing ‘The Most Beautiful Girl in the World’. Now that’s the moment I will never forget.

What made it all real to me was the car. One of the big prizes for Miss South Africa was always a car. They would fix a seat on the bonnet of the car, and Miss South Africa would perch there and they’d drive it around the auditorium to a standing ovation. And now it’s me, driving around the Superbowl on top of a silver Ford TX5, doing the royal wave while the music plays. If you ask me, the highlight of the evening was not hearing my name being called, it was that moment.

I had grown up watching the winner being driven around the Superbowl, and now it was me! My family had never been in a position to be able to afford a brand-new car, and there I was, at only twenty years of age, with my very own car. I mean, how crazy can life get? It was totally surreal.

Every now and then I’d spot people I knew. I caught sight of my mom and dad. I saw a lot of my peers from varsity. I was very involved with student politics on campus and was president of the Central Cultural committee, and the student representative council had dispatched two buses to bring people to the finals. It was the most beautiful experience.

I’ve just remembered a story my mom shared about that day. Now, you must know that my mom made sure we all had chores at home, and my knees were always black from kneeling down to scrub the floors and the outside the stoep (verandah). So Mama and Papa are watching the pageant and it’s the swimsuit parade, and I’m up there, and there’s a couple sitting behind them in the audience and Mama hears the woman say, ‘Ag, look at that one with the black knees — that one doesn’t stand a chance.’ When my mom told me later, she said, ‘You know, my baby girl, it hurt me to hear that. I feel so bad, because I made you clean those floors and scrub that stoep until I could see myself in them.’

Even so, not long after that, we girls were all gathered at our mother’s house, sitting outside talking, and she said, ‘Well, what do you think? Do you think this stoep is going to clean itself ?’ And then you literally took off your fancy garb, and you were on that stoep, shining it with Sunbeam! Even after I won the pageant, when I went home there was no Miss What What. I was expected to do my bit, the same as always. Anyway, looking back I’m glad I was brought up like that. It certainly kept me grounded.

Basetsana Kumalo thanks fans for more than 15,000 sales of her memoirs

"Each and every one of us have a story. Our stories are valid. Do not be afraid to write yours."
TshisaLIVE
1 month ago

Saray Khumalo was the first black African woman to summit Mount Everest in a feat that took her four attempts. Many would have called it quits, but ...
Books
3 months ago