EXTRACT | ‘Clare: The killing of a gentle activist’ by Christopher Clark 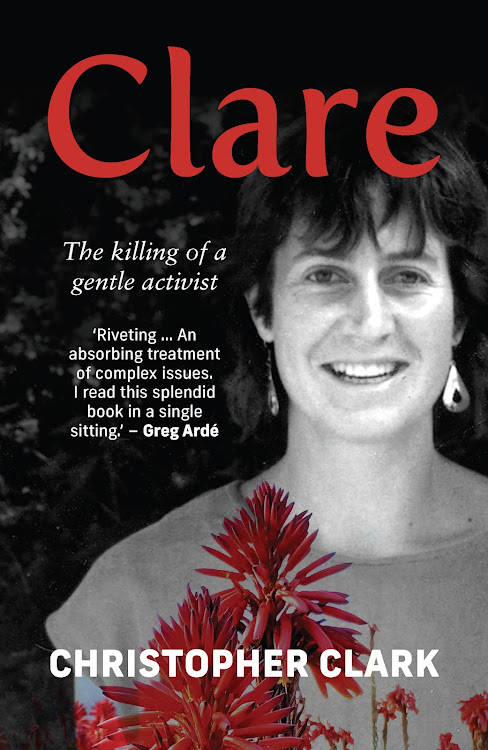 'Clare: The killing of a gentle activist' is journalist Christopher Clark's account of the search for the truth about her killing.
Image: Supplied

Manguzi, KwaZulu-Natal. For two weeks in November 1993, Clare Stewart’s body lay hidden in a shallow ditch until cattle herders discovered her remains. The much-loved ANC activist and rural development worker had moved there five years previously to set up a cattle co-operative. Even as rampant political violence engulfed the region, she had found purpose and a home there.

Yet shortly after her death, local leaders were rumoured to have held a feast to celebrate the “recent demise of certain targets”.

The police claimed they could turn up no leads and made no arrests.

Amid the chaos and euphoria that met the birth of a new SA, the details of Stewart’s death would remain hidden among the dirty secrets of the transition to democracy.

When journalist Christopher Clark stumbled upon Stewart’s story, it would not let him go. This is his account of the search for the truth about Stewart’s killing, and his quest to better understand both her bold, intrepid life and her enduring legacy.

By all accounts, in the 28 years since Clare’s death, the once-sleepy town of Manguzi had changed significantly. Among other things, a raft of new supermarkets and fast-food outlets had sprung up along the now-tarred main thoroughfare. In between the gleaming facades, scores of traders, most of them women, crowded the pavement, sitting next to voluminous piles of cheap clothes and handbags.

Now replete with lodges and guesthouses, the area was a hub for tourists exploring the nearby golden sandy beaches and lush nature reserves, or making a last pitstop before heading across the border into Mozambique. (That country had undergone its own gradual tourism rebirth since the end of its decades-long civil war in 1992.)

But pieces of Manguzi’s troubled past remained, albeit sometimes in a slightly different guise. The area was still a hotspot for cross-border crime and trafficking, while the chronically under-resourced and underpaid local police force was routinely beset by corruption. (In 2017, 18 police officers were arrested for colluding with cross-border car theft syndicates implicated in a raft of violent hijackings in and around Manguzi.) The local ANC-run municipality, riven by factionalism and ravaged by graft, was frequently the target of service delivery protests and shutdowns by poor black residents.

I decided to make my first trip to Manguzi after a frustrating few weeks of failing to track down Clare’s former colleagues from the cattle co-operative, as well as anyone from the area who might have known anything about her abduction and murder. Many of these people had fallen off the map altogether, which was unsurprising given the decades that had elapsed, let alone the fact that, as a border town, Manguzi was a transient place. Its population had also been devastated by the Aids epidemic of the early 2000s. Even now, HIV prevalence in KwaZulu-Natal was about 30%.

For her part, Vanda had long since lost touch with any of her old contacts from Manguzi. She gave me a list of names, but most were common Zulu monikers that turned up scores of results in my Google searches. There was little I could do about Clare’s story from the comfort of my small office in Muizenberg. I needed to visit the place where so much of her legacy both began and ended.

But as I drove through the centre of town, slowing occasionally to allow goats and cows to cross the road, I felt anxious. In my career as a journalist, I had never pitched up somewhere new or unknown with so little to work with. I had no sense of whom I could trust or rely on. And I was a little raw from my recent experiences of reporting on political violence in other parts of the province.

I was also chastened by a Google Maps-related mishap en route to Manguzi that had culminated in my small rental car getting stuck in a patch of deep, soft sand some kilometres from the nearest tarred road and any kind of cellphone service. A group of burly young Zulu men had eventually come to the rescue, literally lifting the car out of the sand and setting it on a firmer track, but my ego did not emerge unscathed from the debacle.

Thankfully, I was not alone in all this. I’d enlisted the assistance of Zimbili Vilakazi, a soft-spoken and prolific Durban-based freelancer. Zimbili was a minor local celebrity in KwaZulu-Natal, thanks to her work for the popular Daily Sun tabloid. There she covered everything from taxi violence to tokoloshes, sometimes filing as many as four stories a day. On our way to Manguzi, we were more than once accosted by a petrol attendant eager to know what story she was working on.

While Zimbili rode shotgun, my nomadic photographer friend Sam sat in the back of the car, regaling us with anecdotes from recent reporting trips to far-flung places, including Nepal and Ethiopia. A little closer to home, Sam and I had recently finished a series of articles in Durban for GroundUp about the shackdwellers’ movement, Abahlali baseMjondolo. They were locked in an increasingly bitter land conflict with the ANC and eThekwini municipality. At least 10 Abahlali leaders had been killed since 2013, while the group’s irrepressible secretary general, S’bu Zikode, had survived a number of attempts on his life and was currently in hiding. The plight of Abahlali was inextricably linked to other forms of state corruption and political violence playing out across KwaZulu-Natal, with many of the same power brokers and trigger pullers involved. The rot was everywhere.

I had, at least, managed to line up one apparently solid source in Manguzi. He went by the nickname Makotikoti and was widely rumoured to make his living as a wildlife poacher. He was also said to have been an active part of local IFP paramilitary groups in the early 1990s. Another journalist colleague, who had spent some time doing a documentary on turtle conservation in nearby Sodwana Bay, assured me that Makotikoti knew pretty much everyone in the area, including many of the more unsavoury characters.

We met Makotikoti at a busy Engen petrol station and then followed his beaten-up Toyota bakkie to a mud-brick bungalow a couple of kilometres out of town. Chickens wandered around the periphery of the property, pecking at the sandy soil. Makotikoti invited us into a dank and dimly lit living room, where an elderly man with cataracts sat in an olive-green armchair near the only window. As we spoke with Makotikoti, the old man would occasionally interject distant and fragmented memories in Zulu to no-one in particular.

Makotikoti, who had small eyes, angular features, and a deep scar running down the right side of his face, had only vague recollections of Clare. However, he did know a former member of the cattle co-operative called Mandla Ntuli. This man now worked as a lawyer in Durban, but he often returned to Manguzi to see family or for business. After I’d taken down Mandla’s number, I asked Makotikoti in a fairly roundabout way about his memories of the violence between the ANC and the IFP in the early 1990s. He stared at me impassively as he responded to Zimbili in Zulu. Even though I didn’t speak the language, I could tell that he was evading the question. “He says that he doesn’t remember much,” Zimbili eventually translated. “He says it was a very long time ago.”

I called Mandla the next morning. He was in Manguzi for a couple of days to attend a funeral, which happened to be taking place down the road from our accommodation on the edge of town. He stopped in for a coffee and a chat once the proceedings were over.

A portly and convivial man now in his early fifties, Mandla had worked as a driver and fixer for Clare back when he was still a bookish 18-year-old. “She was a very likable person,” he recalled. “She tried as much as possible to be part of the community. And she was always trying to improve her Zulu so that she could converse with people freely in their own language.”

Mandla also said that Clare had helped him and other similarly politicised locals to set up one of the first ANC Youth League branches in the area. “But in terms of her own ANC affiliation, she was not a revolutionary activist, she was more of a quiet activist,” he added. “Her kind of activism was just to sit with people as if she was one of them, to treat everyone equally.”

Mandla had left the co-operative and moved to Durban to study law before Clare was killed. In fact, she had helped to fund his studies and had connected him with Peter Rutsch, a friend who was an attorney with the Legal Resources Centre and with whom Mandla had done his articles. Mandla did remark that a number of rumours about the motive for the murder had continued to circulate in the area for some years after he left.

One such rumour was that the co-operative’s chairperson, Khotiza Ngubane, had had a hand in Clare’s murder to consolidate his own power, and that her assistant Jabulani Tembe may also have been involved. “There were certainly differences within the co-operative from time to time,” Mandla said without mentioning any names. “To my mind, they likely came about because there were resources that Clare had brought to the table that people wanted to appropriate for their own benefit.”

Mandla maintained that a political hit carried out by state security services in conjunction with local IFP structures was the most likely explanation for Clare’s killing. However, it was not implausible that these forces could have identified and potentially exploited any weak links or divisions within the co-operative for their own ends.

A searing, intimate memoir tracing the author’s attempt to find out the truth about her father’s murder.
Books
3 months ago

Join author Matthew Wilhelm-Solomon in conversation with Christa Kuljian for the Joburg launch of 'The Blinded City' on July 20.
Books
1 month ago

A harrowing journey in search of answers

Liz McGregor has written an intimate memoir tracing her attempt to find the truth about her father’s murder, writes Joanna Hichens
Books
2 months ago

This week we feature a saga about three generations of black women, a journalist who investigates death, and a soapie thriller about an ...
Books
1 month ago