Norman McFarlane wrote about his time in the Border War partly as therapy, to preserve memories and help those understand what happened to him. 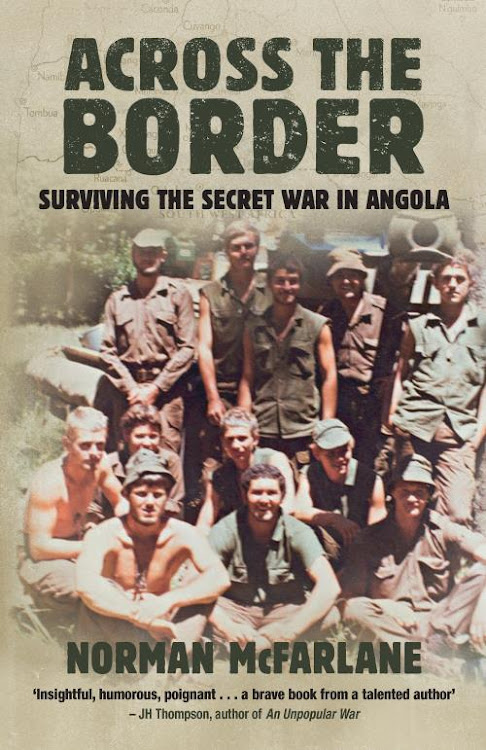 Across the Border: Surviving the Secret War in Angola by Norman McFarlane.
Image: Supplied

Haunted for decades by the image of a headless boy soldier he encountered in Angola, Norman McFarlane wrote about his time in the Border War partly as therapy to deal with his PTSD, partly to preserve memories and tell the story of SA’s “secret war” and partly to help those around him understand what happened to him and why he is the way he is.

Like most young conscripts, McFarlane did not want to serve in the SA Defence Force, but he ended up taking part in Operation Savannah in 1975/1976 — the incursion into Angola — during his national service and then served in a three-month “camp” in 1979.

McFarlane fought during the invasion of Angola at places such as Luso and Silva Porto before SA forces were withdrawn south. There was much dissatisfaction as the soldiers believed they could have taken Angola’s capital Luanda. Unaware of the broader political situation, they felt the attack and subsequent withdrawal “made a mockery of the death and injury of so many of our comrades in arms”.

As an artillery gunner, McFarlane was often removed from the direct contact of battle, but as he moved across the front lines he was horrified by the many mangled bodies left by the artillery and for decades was haunted by the image of a dead boy soldier in the road. Thus, the last quarter of the book deals with McFarlane’s return to civilian life and his PTSD: the book is in part about accepting the traumas of war and coming to terms with them — a decades-long struggle McFarlane was initially reluctant to embark on as, like most former conscripts, he did not realise how badly he was affected.

His story is typical of many young white South African conscripts who were forced to fight in the Border War. Across the Border is not an exceptional account of combat in Angola but a more typical account (though it is not short on action). It also touches on the experiences of being a white South African male under apartheid and being fingered by the security police (McFarlane’s uncle was the banned journalist Donald Woods).

While not quite as hard-hitting or action-filled as books such as Chris Cock’s Fireforce or Granger Korff’s 19 With a Bullet, Across the Border is a thoroughly readable account not just of a gunner fighting in the Bush War, but also of the PTSD and side effects of that conflict and is a worthy addition to anyone’s Bush War library.

Stolen youth: Battling the demons of the Border Wars

Jonathan Ancer talks to author Norman McFarlane about the post-traumatic stress disorder suffered by so many South Africans whose youth was shattered ...
Opinion & Analysis
2 months ago

Mark Winkler writes about the origins of his novel 'Due South of Copenhagen' (Umuzi), shortlisted for the 2021 Sunday Times CNA Literary Awards.
Books
1 year ago

Leopold Scholtz has gone further and dug deeper than any researcher so far, writes Archie Henderson of 'The SADF and Cuito Cuanavale'
Books
2 years ago