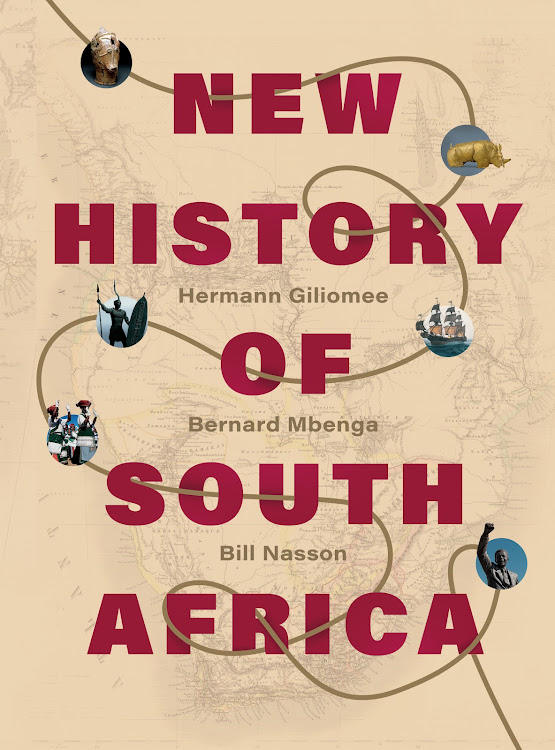 This newly updated, comprehensive history of SA presents the story of our turbulent country in a fresh, readable narrative.
Image: Supplied

This newly updated, comprehensive history of SA presents the story of our turbulent country in a fresh, readable narrative. Grippingly retold by leading historians and other scholars under the editorship of Hermann Giliomee, Bernard Mbenga and Bill Nasson, this beautifully illustrated volume makes the complex South African story, from earliest times to present, come alive.

From prehistory and the first peoples, it takes us through the great migrations of pre-colonial and colonial times and, later, the discovery of diamonds and gold and the origins of African and Afrikaner nationalism. It examines the South African War, the two world wars, and the impact of a growing working class, along with the many forms of resistance against apartheid culminating in the transition to majority rule.

It ends with an exploration of the first three democratic presidencies and the difficult dynamics of a new society, including economic malaise, gender violence and corruption.

The fossil record is meagre and until recently there were no primate fossil finds from the period four- to seven-million years ago, when the hominines diverged from the lineage that was to lead to the chimpanzees of today. So other methodologies, such as molecular dating, have been used to fill the missing pieces. While hominid fossils are rare and stumbled upon through luck, the 40,000 genes found within living humans are a vital database on our species’ past.

Much evolutionary change is random, especially in the parts of a species’ genome that do not influence its survival rate — including a quantity of ‘junk DNA’ and the DNA contained in the mitochondria of all human cells. Opportunely for the researcher, random processes of this type are subject to statistical laws. As David Christian observes: ‘If you take a new deck of cards arranged by suit and number and shuffle it a few times, a statistician can estimate roughly how often it has been shuffled by determining how much of the pack differs from its original condition. The larger the number of cards and shuffles, the more precise and reliable such estimates can be.’ Researchers have argued that if we take two modern species and determine the variations between their DNA sequences, we can ascertain when their two lineages divided from a mutual ancestor.

Mitochondrial DNA (mtDNA) comes from the mother alone and records a pristine family history from one mother to the next. It is particularly useful to researchers (even though it comprises a mere 0.0006% of human nuclear DNA) because it has a high rate of mutation and is easy to obtain for analysis. The only way variation in mtDNA can be introduced is through mutation. The number of mutations separating two mtDNA types is a way of measuring the length of time since they shared a common ancestor. Thus mtDNA provides a genetic clock.

Preliminary studies of human mtDNA divergence led to the ‘African Eve’ hypothesis that all mtDNA types found in our global human population of today can be tracked back to a single ancestor who lived in Africa about 200,000 to 150,000 years ago.

The idea of one single common ancestor of all humankind sounds a lot more dramatic than it is. Simply put, we all share an ancestor that was not the first or only female alive. She was just a member of a group — but the mtDNA of her contemporaries went extinct because they or their descendants left no progeny at all, or left only male offspring. This ‘African Eve’ had ancestors, of course, who were also our ancestors, but she is simply the most recent common ancestor.

All studies of global human mtDNA divergence have shown that African populations have the biggest mtDNA divergence (followed by Asian and European populations). The fact that Africans have the greatest mtDNA sequence variation proves they have amassed the most mtDNA mutations. This provides compelling evidence for the idea of the African origin of humankind because the population with the most diversity is almost certainly the ‘ancestral population’. All other population groups seem to be subsets of the diversity found in Africa, which further buttresses the argument for an African origin.

By at least a million years ago (and probably closer to two-million), early humans were able to expand their range outside Africa. Fossil evidence for this has been found in southern Europe, Russia, the Middle East, Asia and Indonesia, but not in the Americas or in Australia. This dispersal is sometimes called ‘Out of Africa I’.

There are two competing theories as to what happened next. The first is the ‘multiregional’ hypothesis that modern humans evolved over the past million years from hominid populations already living in Eurasia via gene flow. It postulates, that isolated by geography, populations evolved independently but with occasional interbreeding. The result was separate populations of modern humans, each with distinct physical features. It is characterised by regional continuity of anatomical features and argues for deep genetic divisions between ‘races’.

The second is the ‘Out of Africa’ hypothesis, which argues that modern humans originated in Africa as recently as 150,000 years ago and then spread out from there. The genetic and fossil evidence for this is more convincing. It contends that the people descended from the first migration out of Africa were replaced by a second, more recent migration of anatomically modern people about 80,000 years ago. Instead of interbreeding with the earlier population, modern humans replaced them, driving them to extinction. The study of mtDNA shows that an unbroken genetic train can be traced back to a common ancestor from Africa. So far there is little evidence of a genetic contribution from non-African populations.

Hilary and Janette Deacon note: ‘All living humans are members of one “rainbow” species, Homo sapiens. Not surprisingly, some trivial differences have developed because of our wide geographical distribution.’

The differences, like skin colour, are tiny and superficial. Skin colour, for example, is a perpetual concern in racialised discourse. Our earliest forebears, some six-million years ago, probably had lightly pigmented skin covered with dark hair, much like the chimpanzees of today. As we evolved, hair was lost and sweat glands developed to help control the body’s temperature. By 150,000 years ago we were all probably darkly pigmented. Melanin in darker skins protects against the sun’s ultraviolet rays, which cause cancer.

As humans left Africa and moved into less sun-drenched regions, natural selection for lighter skins probably occurred to assist with the synthesis of vitamin D. So skin colour is simply linked to the geographic area of recent origin.

Race has not always been perceived as an ‘illusion’. As Saul Dubow has shown, physical anthropologists in the early decades of the twentieth century were shaped by their times: ‘[In] charting the paths of evolutionary development they helped confirm — by implicit analogy if not outright comparison — the intrinsic superiority of the white races and the inexorable progress of European civilisation.’ However, this was to change over time.

After 1945, there was a new discourse that moved away from thinking in terms of rigidly defined ‘races’ or ‘tribes’, and instead adopted ideas such as gene ‘pools’ and ‘flows’. This reflects the move away from thinking about classifying people in terms of unchanging ‘types’ and signalled a fresh emphasis on the dynamic flexibility of human population groups.

There has been little biological change in Homo sapiens over the past 40,000 years. But the amount of cultural change has been extraordinary, particularly the domestication of plants and animals. The growth of farming and care of herd animals (pastoralism) began one of the most remarkable changes in Earth’s ecology. The transition to agriculture, starting about 10,000 years ago, took place in several regions of the world but not initially in Africa. By this time, the cool ice-age landscapes had retreated in the face of warmer, damper environments. People adapted to these changes by making more intensive use of the landscape. At the outset they took advantage of a broad range of plants and animals within each region, but later focused on particular wild plants and animals.

By painstakingly collecting plants and controlling wild herd animals, people could select sought-after characteristics. This process of controlled breeding eventually created new forms of animals and new species of wheat, corn and other plants and useful byproducts. Food production started much later in Sub-Saharan Africa (as opposed to Eurasia) because of a number of reasons.

Jared Diamond argues that to domesticate wild animals they must be docile, cheap to feed, grow quickly and breed in captivity: ‘Eurasia’s native cows, sheep, goats, horses and pigs were among the world’s few large wild animals to pass all those tests. Their African equivalents — such as the African buffalo, zebra, bush pig, rhino, and hippopotamus — have never been domesticated, not even in modern times.’

Similarly, even though the Sahel and Ethiopia, for example, did produce indigenous crops, there was a much more limited variety of wild ‘starting material’ suitable for domestication. Diamond further argues that Africa is only about half the size of Eurasia and, moreover, Africa’s major axis is north — south, which means widely differing zones of climate, rainfall, day length and plant and animal pathogens (unlike in Eurasia’s east — west axis, with the same latitude and similar climates and day lengths). Diamond reasons that this impeded the spread of food production and cultural exchange as ‘crops and animals domesticated or acquired in one part of Africa had great difficulty in moving to other parts’. Thus, he concludes, ‘The different historical trajectories of Africa and Europe stem ultimately from differences in real estate.’

The book became not just an overview of South African history but also, we think, an attempt to show just how things can fall apart when bad ...
Books
4 months ago

‘First People: The Lost History of the Khoisan’ is an invaluable read

'First People: The Lost History of the Khoisan' provides a detailed account of a lost history as it examines the lineage of southern Africa’s ...
Books
5 months ago